Behavioral ecology is the study of animal behavior development on an evolutionary level due to ecological pressure. Study the definition of behavioral ecology, social and territorial behavior, mating, and child raising. Updated: 11/09/2021
Create an account

Wouldn't it be great if we could just blame everything we do on genetics? Oh sorry, I can't stop tapping my fingers, it's in my DNA. Oh sorry, my sweet tooth is genetic. Oh sorry, I evolved to be annoyed by stupid people. I mean, the possible excuses are endless.

While we can't blame everything we do on genetics, there actually is something to this idea. In every species there are certain instinctual behaviors, behaviors that are not learned as much as inherited, and, often, these behaviors are adapted because of external factors. The study of the evolutionary development of animal behavior as a result of ecological pressure is called behavioral ecology. Basically, this field of research examines the ways that external factors can influence species to evolve certain behavioral traits. Here, why don't we take a little research safari and check out how certain species get to blame their behaviors on evolution. 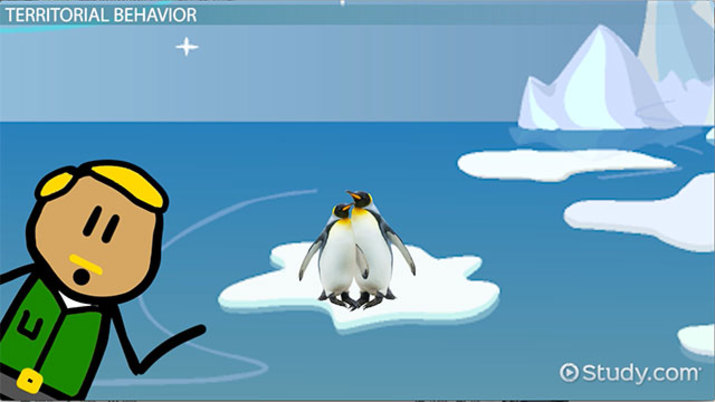 Try it now
Back
Coming up next: Animal Signals & Communication: Types & Examples

Now, as we head off on our safari, let me make some important distinctions about evolved behaviors. In some species, we see behaviors that are evolved to benefit individuals - the way that a female mantis will eat the male after reproducing. However, most behaviors that are evolved in response to ecological pressure are social, which means that they benefit the individual through the process of creating social groups. In behavioral ecology, we call a series of interacting social behaviors that develops stable social relations an evolutionarily stable strategy, or ESS. Why do penguins instinctively huddle during the winter? This social strategy gives them the best chance at survival in their environment.

Now, there are dozens of kinds of behaviors evolved in response to ecological pressure, so we're only going to get to see a few common examples on this safari. Let's start here. See these lions? We are in their territory, which makes them want to chase us off if we are seen as a threat to their resources. Territorial behavior is a great example of a behavioral trait evolved in response to ecological pressure. Say that these lions don't protect their territory; other predators could invade and eat up all of the lions' food supply. So, territorial behavior exists because an ecosystem has a limited amount of resources. Were there unlimited gazelle in this region, the territorial behaviors would cease to exist, but as it is, these lions are going to defend their territory so that their food supply is not depleted. Do lions know why they do this? It's not like they are counting gazelle and budgeting potential food. This is an instinct, an evolved and automatic behavior.

Where else do we see evolved behaviors? How about mating, the selection of reproductive partners and production of offspring? Mating is an important part of a species' survival, and it is a strong instinct in pretty much every living thing. So, how is this an evolved behavior? Well, how about determining the attractiveness of a mate? The qualities that species find to be most attractive are those that indicate the greatest chance at survival. Male elk fight each other to show strength, indicating that any offspring could fight off predators. Many species of birds have mating rituals that involve gift giving, indicating resourcefulness. Even the fact that, in most species, females are responsible for selecting a mate while males compete for attention is an evolved behavior to give females the best chance of selecting a mate with the traits needed to create offspring that will survive in that environment.

The last evolved behavior we've got time for today is child raising. In many species, only one parent is responsible for raising offspring, and when this isn't true, it's often because a species evolved tighter family units for a better chance at survival. There's one species where this behavior is very obvious. That's right, us. We do not expect children to be raised by a single person. Even in single-parent families, our children are influenced by friends, neighbors, extended family, and really all of society. Human children are designed to absorb information from any human that passes by, and it's because we are genetically built for social child raising. This is common in many primates, where tighter family groups give species a greater ability to split chores of child raising with food production and defense. If everyone helps out, the entire social group is better off. So, there you go. If you see a baby and you feel the overwhelming desire to go, 'aw' and pick it up, don't be embarrassed. It really is in your DNA.

Some behaviors are choices and others are more instinctual. The study of the evolutionary development of animal behavior as a result of ecological pressure is called behavioral ecology, and it's a fascinating field of study. Different external factors can encourage species to evolve different behavioral responses, striving towards a series of interacting social behaviors that develop stable social relations called an evolutionarily stable strategy. There are dozens of examples of evolved behaviors, but one great example is territoriality, the defense of resources within a territory. Animals defend a territory because of limited resources; this environmental pressure influences the evolution of behavior. Another example is mating, the selection of reproductive partner and production of offspring. Which traits are attractive and who selects their mating partner is a direct reflection of which traits are most beneficial in a specific environment. Finally, we looked at child raising. Especially in species that practice social child raising, like humans, this behavior represents the strongest chance at survival.

So, turns out there are some things that we can blame on evolution. But, I still don't think that yelling at traffic is one of them.

Homeostasis in Animals Examples & Process | What is Homeostasis?

What is a Mammal? | Mammal Characteristics, Examples & Types

Homeostasis in Animals Examples & Process | What is Homeostasis?

What is a Mammal? | Mammal Characteristics, Examples & Types