To be an ethical speaker one must present values that reflect good moral ethics. Learn the principles of ethical public speaking, such as trustworthiness, integrity in the subject matter, respect for others, dignity in conduct, and truthfulness in message. Updated: 10/02/2021
Create an account

The First Amendment of the Constitution protects our right to free speech. That's a given right to all citizens of the United States.

But is freedom of speech always ethical? Let's explore this question. If you define ethics as rules of conduct all human beings should possess that reflect what's right and just, then just how far can a public speaker stretch the boundaries of what is legal and what is right?

Good question! As far back as Aristotle's days, there was evidence that public speakers should adhere to five simple principles:

Even in modern times, people expect that speakers will uphold these timeless standards. So, how does a speaker earn an audience's approval? 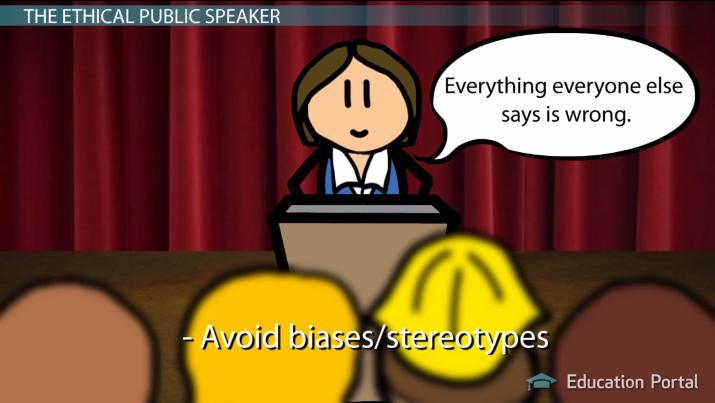 Coming up next: How Public Speaking Differs from Casual Conversation

It is difficult to ignore the hate-filled speeches of people, like Adolf Hitler or the Ku Klux Klan. The messages of violence, extreme power and supremacy are enough to make our skin crawl.

Suppose you are commissioned to write a speech for your company. In that assignment, you must wage an argument for something that you do not believe in. For example, some people don't believe in wearing fur coats. If you are one of those people, you are faced with a challenge to write a positive speech about the benefits of wearing fur. You may decide to side with your own value system and choose not to get involved. Or you may have little choice but to hit the keys and start writing.

So, how would you gain the trust of the audience through the message? Here are a few tips:

In our example, the subject of the speech may be unethical, but the message doesn't have to be. You might begin your speech by stating the facts about the humane treatment of the animals used for fur coats. Your choice of words will help send a more positive message.

You should avoid using biases or stereotypes when speaking to a group. If you are promoting a line of fur coats, it is best to remain objective about it. Avoid generalizing or specifically bashing those who do not agree with your argument.

For as much as you can, believe in what you are saying. It may be difficult to agree with the topic at times, but as long as there is some part of the speech that you do agree with, it will come across as truthful.

Respect your audience's beliefs and values, as well. While you don't have to share the exact same moral code, it's best to align your speech so that there are overlapping beliefs and values. Be prepared. Not only for the speech but also for questions that may follow afterwards.

Of course, you must be truthful in your statements and not say anything that can be proven to be a lie. Lying or misleading your audience about the facts will only raise suspicion about other points you may raise. If you are unsure about a fact, leave it out of the speech until you can authenticate it. Sometimes, when writing a speech, it may be difficult to say exactly what you want to say.

Sometimes, someone else said it better. Don't be tempted to use someone else's words. Instead, find a way to weave the words of others together with yours. This brings us to plagiarism.

Plagiarism is taking someone else's information and calling it your own, and it's illegal and unethical. So, in other words, it should be avoided. That isn't to say that you can't use sources to strengthen your points. You can and should if it helps your position. But it must be properly cited and referenced. Be honest about the sources during delivery, too. This will help to avoid plagiarism or claims of plagiarism. The last thing a speaker wants is to appear shady.

To tie things up, ethics are rules of conduct all human beings should possess that reflect what's right and just. In public speaking, they're mandatory by anyone's standards.

There are five key principles in being an ethical speaker:

Speeches should send a truthful message. This can be done by avoiding plagiarism. That means a speechwriter cannot take someone else's information and call it their own.

This, along with sending an ethically sound message and avoiding biases and stereotypes, will make claims more believable. In fact, believing in your claims will show that you respect your audience.

Lastly, be prepared for questions. By knowing your stuff, you will be able to deliver an ethical speech that will captivate your audience.

By the end of this lesson you should be able to recall the five basic principles of public speaking and know what is required to be an ethical public speaker.

The Importance of Being a Civil and Ethical Listener

The Historical Tradition of Public Speaking

How to Work Supporting Materials into Your Speech

How to Conduct an Interview for Speech Support

Turning Your Topic into Main Points for Your Speech: Tips & Ideas

Supporting Ideas of a Speech: Development, Selection and Characteristics

Adapting to Your Audience During and After Your Speech

Supporting Materials for a Speech | Overview, Types, and Examples

How to Write a Speech