In the field of healthcare, big data give essential insight to professionals in providing proper care. Explore the definition of big data in healthcare, its role in preventing illness and informing best practice, as well as future trends, new correlations, and concerns. Updated: 01/04/2022
Create an account

If there's anything that we can all agree upon, it's the desire to be healthy. Self-help books on staying healthy are always top sellers, and healthcare is an industry worth trillions of dollars every year. However, there's also a great deal of data to analyze in healthcare.

As long as doctors have practiced medicine, they have kept track of a few statistics about their patients, from weight and heart rate to white blood cell counts and reflex times. All of this data could hold a great deal of promise. Needless to say, big data in healthcare is a huge field, and it's only going to get bigger. Let's talk about some of the possibilities that big data could offer. 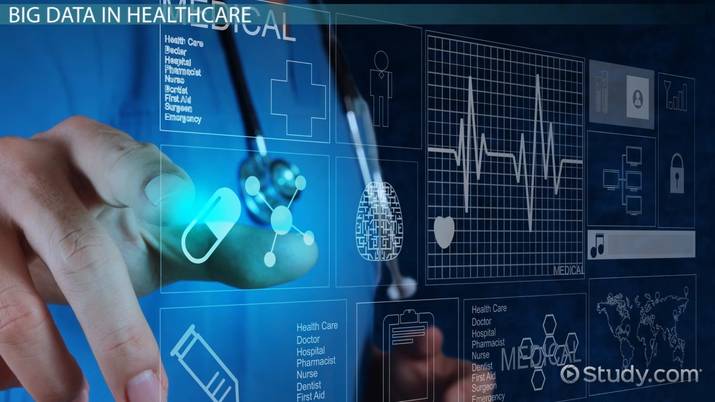 Coming up next: Big Data Applications in Finance

Have you ever heard the old saying, ''an ounce of prevention is worth a pound of cure?'' After all, few of us enjoy being sick; to avoid it, we eat right, wash our hands, and keep our immune systems functioning well. During the winter, many of us take extra vitamin C, for example. However, with big data, illness prevention could become even easier. We're already getting into devices we can wear like the Fitbit, Jawbone, and Samsung Gear Fit that help us with calorie counts, diet maintenance, and exercising. Progress can be updated and compared to others.

Also, wearable technologies that track our vital signs could transmit data that would be compared against the big data of the rest of the population, providing an early warning of when our functioning matches against a number of people who have recently been ill. From there, we can treat the symptoms in a much more efficient manner.

It's not only prevention that sees a great use from big data. Think about clinical research. So far, we only have the potential to really analyze a few particulars about each patient. With big data, that would be very different. New drugs could be created to target disease, each of which would be customized for the population that it has been tested on. Instead of only using such broad categories as weight and age as dosage guidelines, pharmacists and doctors could tailor-make each dosage to be as effective as possible without undue risks.

This can apply to treatment for epidemics as well. Cell phone data has been used to track the movements of the population in the Ebola epidemic in western Africa. This big data can be used to predict the spread of the disease and strategically plan for containment or where to place treatment centers.

This is only the beginning, of course. With technology becoming more and more advanced, big data could allow us to analyze more information than ever. Have you ever been confused by something only to go back and reread it, then find yourself having an ''aha!'' moment? Big data could produce many of those moments by allowing researchers to compare previously unwieldy amounts of information. Maybe a certain illness is related specifically to being female and brown-haired, or male and reliant on rice for the majority of his diet. Some correlations could surface that might not have occurred to a researcher with only minimal data.

Still, there are some concerns about the use of big data in healthcare. First of all, all that big data has to come from somewhere. Patients will find much of their information going into the big data pile. Advocates have been careful to voice their concerns about privacy so that information is not stored in a way that allows the particular details of any one patient to be ascertained.

Additionally, there is the subject of customized cures that draws a certain question of ethics. With limited resources, who comes first? Could this lead to discrimination against certain groups, with better medicines available to those with a certain genetic makeup? These kind of questions must be answered as the use of big data increases.

To recap, big data in healthcare represents one of the biggest changes to the practice of medicine. It allows for patients to receive real-time updates on their health as they're coming down with an illness, which permits providers to respond in a much more timely and efficient manner. It also opens a whole new world of data-driven research, allowing pharmaceuticals to be dispensed in just the right amount and possible cures to be drawn out from the shadows of otherwise obscure data. However, there are still serious ethical and privacy concerns that have to be addressed along the way.