Joelle has taught middle school Language Arts and college academic writing. She has a master's degree in education.

The Bilingual Education Act of 1968 enabled school districts to provide bilingual education to students who spoke little or no English. Learn about the Act's creation and its 1974 expansion. Understand why the Act was needed, explore its issues, and review the Equal Educational Opportunities Act of 1974. Updated: 12/23/2021
Create an account

After restrictions on immigration to the United States were relaxed in 1965, America saw an increase in the number of immigrants coming in. Most of these new immigrants were from non-European nations, and few spoke English. Communities where the new immigrants settled found it difficult to integrate these new residents, especially in their school systems. As one of the states where many immigrants came to live, Texas struggled with providing education to children who only spoke Spanish. Therefore, Texas senator Ralph Yarborough proposed an addition to the Elementary and Secondary Education Act that allowed school districts to offer bilingual education programs for students with limited English proficiency. Title VII, also known as the Bilingual Education Act of 1968, was proposed in 1967 and became law in 1968. 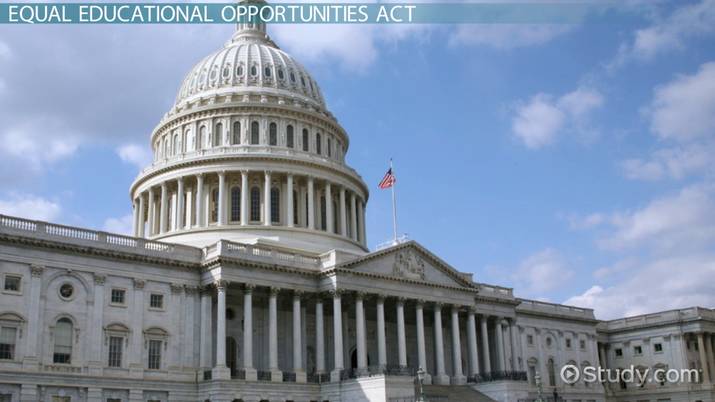 The Bilingual Education Act of 1968 provided federal grant funding for school districts wanting to develop bilingual education programs. These districts could apply for competitive grants to pay for the creation and implementation of bilingual programs, staffing for these programs, training for staff, and parental involvement programs. School districts with high numbers of children living in poverty were eligible for this grant funding. Districts receiving grants were evaluated yearly, and grants could be renewed for up to five years. Initial funding for the act was $7.5 million.

While the 1968 law helped provide greater access to education for children with limited English proficiency, states faced challenges implementing bilingual education programs in public schools. Some bilingual education programs were seen as segregation, the practice of dividing students based on race, ethnicity, or gender, which was outlawed in 1954 after Brown v. Board of Education. Also, some areas were also prevented from creating programs because of English-only laws in their state.

Despite the benefits granted by the provisions of the 1968 act, offering bilingual programs remained optional for public schools. One school district that chose not to provide bilingual programs was that of San Francisco, California. A class action lawsuit filed on behalf of the large population of Chinese immigrant children living in that area claimed that because these children did not speak English fluently and public school classes were conducted only in English, they were denied equal access to education. In 1974, the Supreme Court ruled in favor of the immigrant children in this case, called Lau v. Nichols.

In response to Lau v. Nichols, Title II of the Educational Amendment Act, also known as the The Equal Educational Opportunities Act of 1974, was created and passed by the national government. The 1974 act clarified and extended the reach of the 1968 act. It clarified the original act by removing limitations on funding to only school districts with high poverty rates and required schools to have special programs for children with limited English proficiency.

It continued to provide funding for districts to implement and staff their own programs, but it also provided infrastructure to support these programs. Regional support centers were created to provide hands-on support to school districts and wider reaching training opportunities were created. Also, a clearinghouse for information about bilingual education was created that all school districts could access to develop and support their programs.

After the removal of limitations on immigration in 1965, the United States saw a significant increase in the number of immigrants relocating to the country around this time. As immigrant populations grew, school districts struggled to educate immigrant children who did not speak English fluently. In 1968, Texas Senator Ralph Yarborough proposed the Bilingual Education Act of 1968, which provided funding for school districts to create, implement, and staff bilingual education programs. The approved law provided grant funding for districts opting to offer these programs.

When the San Francisco School District chose to not offer bilingual education programs, the Lau v. Nichols case went to the Supreme Court, resulting in a ruling on behalf of immigrant children citing that English-only programs prevented their access to education. The Equal Educational Opportunities Act of 1974 was later created and enacted to require all school districts to provide special programs for children with limited English proficiency and provide support for these programs through regional support centers, coordinated training, and an information clearinghouse.

History of ESL Education in the U.S.

The 14th Amendment's Impact on Education

Mills v. Board of Education of District of Columbia: Summary & Significance

Differentiating Instruction Based on Student Readiness