Organisms that produce light - like fireflies - are capable of bioluminescence. This lesson will explain the process and take a look at specific examples of bioluminescence in plants, fungi, and bacteria. Updated: 02/08/2021
Create an account

As a child, did you ever spend a warm summer night trying to catch fireflies, or lightning bugs, in your backyard? We would put them in jars and watch them glow before releasing them at the end of the night. Bioluminescence is when a living organism, like a firefly, produces and emits light. If you've ever seen a group of fireflies at night, you'd likely agree that it's a wonderful phenomenon to witness. It occurs due to chemical reactions occurring within the individual. Chemical reactions that produce light are called chemiluminescence, and when chemiluminescence occurs inside an organism, the overall process is called bioluminescence.

Organisms capable of bioluminescence are most abundant in oceans, but some are also found on land. All chemical reactions require the presence of a substance called luciferin. Chemiluminescence is caused by the reaction between luciferin and either luciferase or photoproteins. 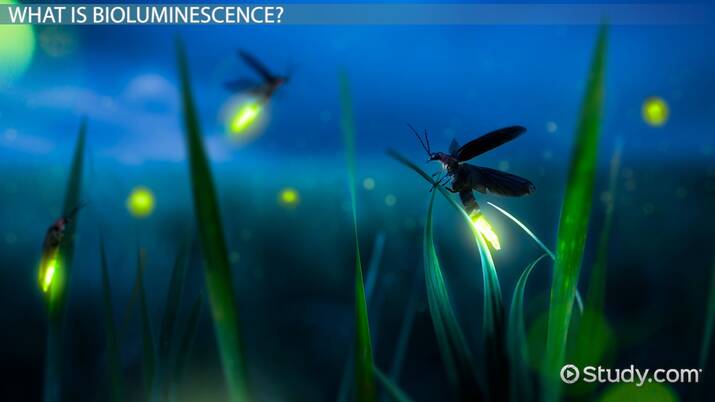 Coming up next: Bioluminescence in Fish, Insects & Cats

There are some plant-like species capable of bioluminescence. Dinoflagellates are plant-like protists that live in the ocean. They're referred to as plant-like because, like plants, they are capable of photosynthesis. However, they are taxonomically classified in a different kingdom. They are single-celled, microscopic organisms that float near the surface, and they can produce beautiful bioluminescent shows when a large population is found. This kind of accumulation is rare, but can be found, usually in tropical lagoons protected from the open ocean.

First, by emitting light at night, the fungi can attract insects that pick up spores and spread them to new locations. This is similar to pollination by bees. Bees visit a flower, pick up pollen, and transport it to the next flower. It's the same idea with fungi and insects. This theory is supported by the fact that most species only emit light at night when it's dark enough for the insects to see it.

All bioluminescent bacteria are bacillus, meaning rod-shaped), and have structures called flagella that are used to help them move in aquatic environments. The most common color produced is in the blue-green range of the color spectrum. This is because, as you get deeper in the ocean, only these blue-green waves are visible. In other words, if the bacteria were producing red light, few organisms would even be capable of seeing it.

Sometimes, when mass amounts of bioluminescent bacteria get together on the surface of the ocean, they emit enough light to even be visible from space. When this occurs, it's called a milky sea, the cause of which is still being investigated by researchers, but they've been observed in tropical regions of the ocean.

Okay, let's take a moment to review what we've learned. Bioluminescence is when a living organism produces and emits light. This occurs when light-producing chemical reactions, known as chemiluminescence, take place in or on the organism. All bioluminescent reactions involve the substance luciferin, which reacts with either luciferase or a photoprotein.

In nature, there are no true bioluminescent plants. However, scientists have found a way to artificially create them by genetically combining them with bioluminescent bacteria. There are also plant-like protists called dinoflagellates that are capable of bioluminescence. There are about 70 species of fungi known to use bioluminescence, though the reason for using it is still not completely understood. The most common type of organism to use bioluminescence is bacteria, most of which are found in the oceans. They have different ecology and characteristics, but all are bacillus, meaning they're rod-shaped.

We also learned that there are many different kinds of phenomena involving bioluminescence that are still being studied to this day, including the phenomenon of the milky sea, which seems to occur when mass amounts of bioluminescent bacteria get together on the surface of the ocean and they emit enough light to even be visible from space. There's always more to learn about life on this planet, and bioluminescence is an area where it couldn't be more obvious!

What is Bioprospecting? - Definition & Examples

What is Limnology? - Definition, Scope & History

What is Amoeboid Movement?