Lesson Transcript
Instructor: Joshua Anderson
The Earth is made up of many different biomes, large biological communities adapted to specific regional climates. Travel across the world and explore rich biomes such as tundra, taiga, open oceans, estuaries, and temperate grasslands. Updated: 08/18/2021
Create an account

So, you may remember that latitude and rainfall are two major factors that determine the type of biome that is present in a given area. But there are a couple of other very important factors that also help to determine which biome is present in an area, and those are elevation and oceans. So, let's take a quick trip from the Pacific Ocean, across California and into Nevada to see just how much biomes can change based on these two factors. 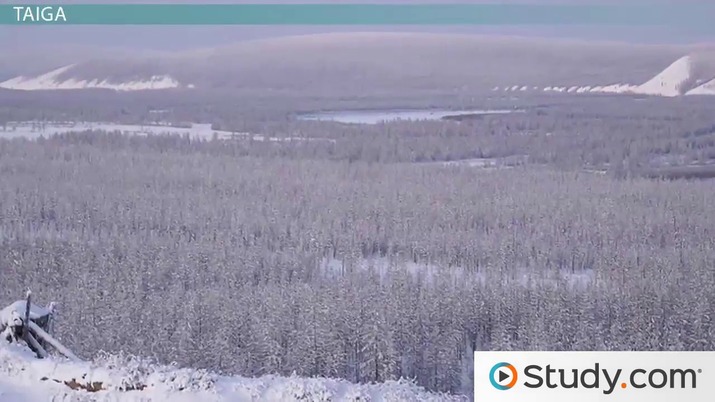 Try it now
Back
Coming up next: Biogeochemical Cycling and the Phosphorus Cycle

Most of the world is covered by oceans, and 65% of the world is considered to be an open ocean biome where the water is deep and land is far away. On a per acre basis, open oceans are one of the least productive biomes because they are nutrient poor. Photosynthetic phytoplankton, which include cyanobacteria, dinoflagellates and other similar organisms, do live out here in the open ocean. However, their growth is limited by scarce nutrients. Dead organic matter falls to the sea floor and takes its nutrients with it, leaving the water at the surface nutrient poor. Despite this relatively poor productivity, open oceans cover so much surface area that on a total net basis, they out produce any other single biome, even tropical rainforests.

If we now head towards shore and find a place where a river enters the ocean, we'll find a much smaller, yet very ecologically important biome: an estuary. Estuaries are areas where freshwater streams or rivers merge with the sea. They often take the form of large salt marshes where the salinity of the water can vary based on the tides and freshwater input rates. Estuaries are enriched with nutrients washed downstream by the rivers, which makes them very productive ecosystems and active breeding grounds for many types of fish, shrimp and other aquatic animals. Estuaries are also the gateway to freshwater breeding grounds of still other marine animals, like salmon. Because of these key roles that estuaries play in the reproductive cycle of many aquatic organisms, their health can have major consequences for lots of marine populations. Unfortunately, estuaries are popular sites for human developments and are also where pollutants dumped upstream end up.

As a result, many estuaries have been almost completely destroyed, and many others have been polluted. The consequences of estuary destruction and pollution affect not only the populations of species that use estuaries but can also have major effects on predators of these species as well.

As we move onto the dry land of California, if we're in the Southern part of the state, we're almost certain to encounter hilly terrain. These hills experience moderately cool, wet winters, and long, hot, dry summers. The dominant biome here is called chaparral, which you may remember is composed mainly of dense, evergreen, drought-resistant shrubs.

A little further inland, the hills give way to a very large, inland valley. The sea breezes from the ocean don't reach this valley because they are blocked by the coastal hills, which are sometimes high enough to be considered mountains. As a result, the Central Valley experiences colder winters and hotter summers than the coastal hills, but it collects water from both the coastal ranges and the Sierra Nevada range, or at least it used to a little over a hundred years ago. Back then, the Central Valley contained a vast tule marsh which supported herds of tule elk and antelope as well as semiaquatic mammals, like beavers, otters and muskrats, huge flocks of waterfowl and even fairly large numbers of bears, mountain lions and coyotes. But in the early twentieth century, the vast majority of the marshland was drained and turned into farmland. With the disappearance of the marshes went the tule elk, antelope, beavers, otters and bears from the Central Valley.

Now, most of the valley is farmland, but what isn't farmed is mostly temperate grassland. Fertile soils and frequent winter rains provide enough water and nutrients to support rapid growth of grass species in the winter and spring before the soil dries up and the annual - but mostly introduced - invasive grass species die in the dry, hot summers. While the grasslands of California may not be exactly like those of the central United States, both share the key features of temperate grasslands: temperate climate, seasonal drought, occasional fires and grazing by large herbivores, even if the herbivores are now mostly domesticated cows, sheep and horses.

As we reach the Eastern edge of the Central Valley, the elevation rises and the valley gives way to foothills, which are probably best described as temperate savanna because they're mostly grassland interspersed with trees and some stands of chaparral.

As the elevation increases, oak trees that are abundant at lower elevations, where their drought resistance gives them an advantage, begin to give way to conifers. Conifers, like fir and pine trees, grow much faster than oaks but also require more water and are better equipped to handle colder winter temperatures. These are exactly the reasons why conifers are more abundant at higher elevations. As elevation increases, the temperatures get colder and the precipitation increases. So at around 3,000 feet in elevation, more or less, the predominant biome becomes taiga, which is more commonly known as coniferous forest or a forest composed of evergreen conifers. Conifer forests support an extremely large biomass, most of which is in massive trees, but they also support large populations of many species of insects, spiders, birds, reptiles, amphibians and mammals. In fact, these forests are just about the only places where bears are still abundant in California.

For the sake of classifying major world biomes, taiga is considered a single biome, but there is great diversity within conifer forests. Between elevations of about 3,000 to 8,000 feet in the Sierra, the forests include species like ponderosa pine, Douglas-fir and giant sequoias, which are the most massive organisms on Earth and are only found on the western slopes of the Sierra Nevada mountain range. If you look really closely in this picture of a giant sequoia, you might see a light blue speck near its base. That little speck is a person, just to give you some scale. Between about 8,000 to 10,000 feet in elevation, the trees get much smaller and grow into more twisted shapes. These trees are growing at the very limits of altitude that can support tree growth, but they live exceptionally long lives. One species found here, the bristlecone pine, is the longest living species on the planet, living up to 5,000 years.

Between 10,000 and 12,000 feet in elevation, the growing season isn't long enough to support the growth of trees. Only very small plants, most of which are perennial herbs, can grow in an environment that is so cold for such long periods. This biome is classified as tundra or extremely cold environments with very short growing seasons that can barely support small plant growth. While this particular tundra is found in mid-latitudes at very high elevations and is called alpine tundra, most tundra is found in arctic regions where the topsoil thaws just long enough for plants to grow.

The similarities between arctic and alpine tundra illustrate an important point. Increased elevation mimics the effects of increased latitude, which means that as we travel higher in elevation, we should see changes in the ecosystems that are similar to the changes a person would expect to see if they were traveling to higher latitudes. Indeed, the biome that is found at latitudes just below the arctic tundra is, in fact, taiga just like the biome found at elevations just below alpine tundra is also taiga. This effect allows for a high stratification of biomes on the slopes of tall mountain ranges.

At elevations higher than 12,000 feet, which is only a few mountaintops in the Sierra Nevada, the environment is similar to the polar ice caps. This biome is called extreme desert and is characterized by extremely cold temperatures and a complete absence of plant growth.

In summary, 65% of the world is covered by open ocean, which is nutrient poor and one of the least productive biomes. In contrast, estuaries are areas where freshwater streams or rivers merge with the sea. These estuaries are enriched with nutrients washed downstream by the rivers which makes them very productive ecosystems and active breeding grounds for many different types of aquatic animals.

As we move inland across the coastal hills of Southern California, which are mostly covered in chaparral, we eventually reach the Central Valley which used to contain vast tule marshes but is now mostly farmland with some temperate grassland. The foothills of the Sierra Nevada mountain range are best described as savanna because they contain a mixture of grassland, scattered oak trees and stands of brush.

From about 10,000 to 12,000 feet in elevation, the landscape is tundra, which occurs in extremely cold environments with very short growing seasons that can barely support small plant growth. Very few mountains in the Sierra Nevada range are taller than 12,000 feet, but for the few that are, their peaks are examples of extreme desert, which is characterized by extremely cold temperatures and a complete absence of plant growth. Precipitation increases with increased elevation all the way up the western slopes of the Sierra Nevada range, but it rapidly declines down the eastern slopes of the mountains as most of the moisture is already dropped on the western slopes.

Once you complete this project you'll be able to:

Dr. Armstrong in And Then There Were None by Agatha Christie| Death & Quotes