The word DNA is most commonly associated with criminal investigations but the applications of genetics run well beyond this one field as this lesson explains. Test your knowledge by completing the quiz at the end of the lesson.
Create an account

Inside each and every one of us is a code, the genetic code based on DNA. Like computer code tells a computer what to do or how to act, our genetic code in many ways tells our body what to do or even predisposes it to act in a certain way. This code has been used in many areas, from medicine to forensics. It's a really exciting field, and this lesson will introduce you to the many ways by which genetics can be used to help us all. 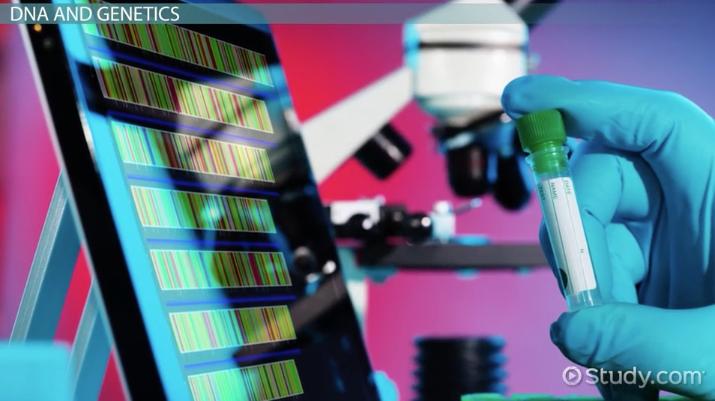 Coming up next: DNA Sequencing and the Human Genome

Fans of CSI and similar shows have probably seen on just about every episode some reference to blood, hair, skin, DNA, or something else that can help solve a case. All of this has to do with DNA forensics, a field that uses genetic material during criminal investigations to help solve a crime or answer questions about a crime. In essence, we try to find a piece of DNA evidence that links a person to a crime-scene, perhaps the perpetrator of a crime. Since each person's DNA is unique, we can be quite certain that if it's found there, the person was there. Unless, of course, it was brought into the scene through some other means.

All in all, when it comes to DNA forensics and DNA profiling, we're simply looking for a genetic match, much like we'd look for a match between traditional fingerprints.

Our latest research is also yielding some promising results by using genes to treat or prevent disease. This is called gene therapy, a technique that allows doctors to prevent or treat a disease by manipulating genetic material as opposed to administering medication or performing surgery. How exactly does this work?

Well, there's more than one way. For instance, a mutated copy of a gene may be replaced with a healthy copy. If we can't do that, then we can simply use a Mike Tyson approach and 'knock out' a mutated gene, one that may cause cancer for example. After knocking this gene out cold, the gene is simply inactivated. In other instances, we may introduce completely novel genes into a person's body in order to help them fight off a new disease, one that they've never encountered before, or an old disease for which there is no traditional cure.

DNA and genetics aren't just limited to humans, however. We've used genetic technologies to transform our diet and even our environment. You see, we only have a limited amount of land at our disposal. This land can only yield so much food for all of us to eat. In order to maximize the output of food, we either need to modify the land, the food source, or both. Inasmuch, genetic engineering has been used to breed new crops that are resistant to diseases or drought, so that we can feed more people. We've also genetically engineered animals to produce more meat per animal and used genetic selection to increase milk output per cow.

Speaking of milk, bioengineers have used genetics to alter the way yeasts behave, so much so that scientists are working on producing cow milk via yeast. That means we no longer have to rely on cattle to produce milk. This decreases the negative impact raising cattle has on the environment, such as excess greenhouse gas emissions, fecal runoff and contamination of water sources, and the use of hormones and antibiotics.

Isn't it amazing how many fields can be impacted by DNA? DNA forensics is a field that uses genetic material during criminal investigations to help solve a crime or answer questions about a crime. DNA forensics uses DNA profiling, which is basically a DNA fingerprint, in order to find a match between a potential suspect and a crime scene. DNA is also utilized in gene therapy, a technique that allows doctors to prevent or treat a disease by manipulating genetic material as opposed to administering medication or performing surgery. And, we use genes to alter our food sources and, in some cases, the environment as well.

What are Genetic Disorders? - Definitions & Descriptions

What is Genetic Engineering? - Definition and Examples

How is DNA Organized into Chromosomes? - Structure & Function

The Distribution of Water on Earth