This lesson will go over the perfect absorber and emitter of radiation, something called a blackbody, as well as the concept of blackbody radiation and electromagnetic radiation.
Create an account

The surface temperature of a planet is mainly controlled by two factors. The first is heating of the planet as it absorbs energy from sunlight. Like the sunlight warms your face on a warm day, it heats the surface of a planet as well. The second is cooling by way of radiation. This is sort of like how a really hot stovetop cools off after you turn off the gas or electricity.

So, when it comes to a planet, there clearly has to be some sort of relationship between the absorption and emission of radiation that must go on, one that determines the surface temperature of a planet. To figure out how this process of heating and cooling occurs we actually have to first understand how electromagnetic (EM) radiation (that is to say, light) is absorbed and emitted by matter itself. Electromagnetic radiation (light) is a form of energy, having wave-like properties, that consists of rapidly varying electric and magnetic fields. 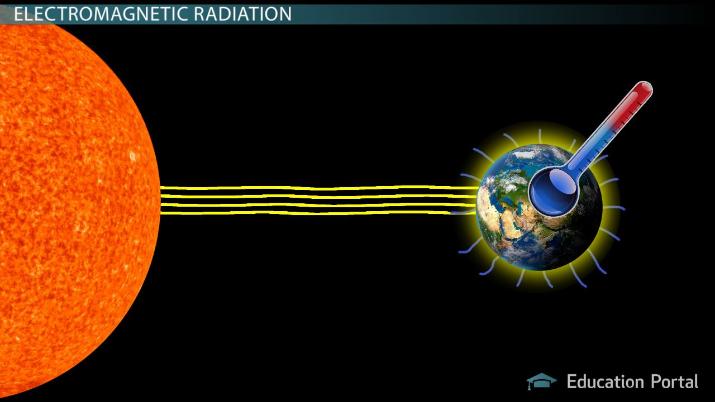 Coming up next: What Are Wien's Law & the Stefan-Boltzmann Law?

What Is a Blackbody?

To understand all of what we just went over, we're going to use two examples: snow and a blacktop surface (that is to say, asphalt concrete). Light that hits an object will be either absorbed or reflected by it, and the portion of light that is absorbed by an object will heat it up.

Snow is a bad absorber of light but a good reflector of it. That's why it's cold and blindingly bright at the same time. It's also why you can get a sunburn in the wintertime when you're around a lot of snow, even though it's cold outside. It's because snow reflects radiation, including sunburn-causing U.V. light, right at you.

For a bit more detail, consider this. We know energy must flow from a hot object to a cold object or to its cooler surroundings (thanks to the second law of thermodynamics). Simply put, this is why ice cubes melt in the face of the sun.

If a blackbody, being a perfect absorber of radiation, was anything less than a perfect emitter of radiation at the same time, it could theoretically continue to absorb net energy from its surroundings (meaning it's going to get hotter) even if it was already hotter than its surroundings to begin with. If there wasn't a sort of balance between absorption and emission, water placed near the sun would turn into ice instead of evaporating away as the sun grew even hotter. This impossible scenario clearly contradicts the laws of thermodynamics. In short, this is why a blackbody must be the best emitter of radiation.

What Is Blackbody Radiation?

Although that blacktop we discussed before isn't a true blackbody, we can create an object as close as possible to a blackbody. This is done by using a hollow sphere with a very small hole in it. The inside of the sphere, as you can only imagine, is blackened and roughened. When light is passed through the hole, it strikes the opposite side of the sphere.

Most of the light is absorbed, but some of it is reflected. However, unlike a blacktop exposed to the wider world, the light here has nowhere to go but to reflect off of other blackened points inside the sphere. This way, as the remaining light bounces around inside the sphere, most of it is absorbed. It's basically a light trap of sorts, since virtually all the light that enters the sphere is absorbed prior to it having a chance to be reflected out of the hole.

As a result, the hole in this sphere is like a blackbody because basically all of the radiation passing through this hole is absorbed. That, and radiation inside the sphere, is also emitted through this hole. The electromagnetic radiation emitted by a theoretically perfect radiator (a blackbody) is known as blackbody radiation.

This lesson's very important concepts are tied to Wien's Law and the Stefan-Boltzmann Law, which are covered elsewhere, but we need to simply review what we've learned already.

Electromagnetic (EM) radiation (light) is a form of energy, having wave-like properties, that consists of rapidly varying electric and magnetic fields. Light that hits an object will be either absorbed or reflected by it, and the portion of light that is absorbed by an object will heat it up.

The Wave Nature of Matter