We obviously have a lot of growing to do after we're born. Not only do our bones need to get longer and thicker as we grow, but an adult skeleton is very different from a fetal or infant skeleton. A fetal skeleton has about 275 bones and a fairly high percentage of cartilage (this helps the skeleton to be somewhat flexible). Compare that to an adult skeleton, which has 206 bones and a much smaller percentage of cartilage. We fuse several bones together as we age, which accounts for the decrease in bone number.

There are two main processes that occur during fetal development that contribute to our bone formation. These are intramembranous ossification and endochondral ossification. The term 'ossification' refers to the process of forming bone. There are a couple of things that distinguish these two processes from one another. 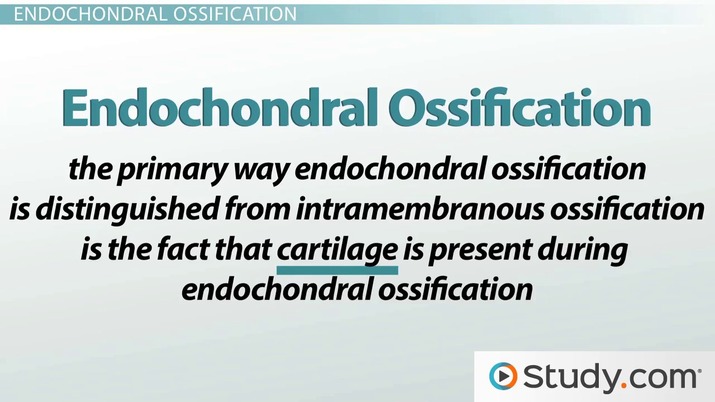 Coming up next: Major Bones of the Skull: Names and Location

Intramembranous ossification occurs primarily during the initial formation of the flat bones of our skull. This process is also responsible for forming our jaw and clavicles, or collar bones. Intramembranous ossification also helps with healing bone fractures. The bone is formed from a specific type of connective tissue called mesenchyme connective tissue.

Mesenchyme connective tissue is made up of mesenchymal, or stem, cells. These cells are interesting because they haven't differentiated yet. This means that it hasn't been determined what this cell is specifically going to be. It could be a bone cell, cartilage cell, muscle cell, or even a fat cell! When you were little, how many times did you change your answer when asked what you wanted to be when you grew up? You could have said an astronaut, a doctor, or a fireman; anything was possible. This is how a mesenchymal cell works. It's going to be something, but that specific something hasn't been determined yet.

Endochondral ossification is essential for the formation of long bones (bones that are longer than they are wide, such as the femur, or thigh, bone and the humerus - the bone in your upper arm), as well as short bones (bones that are shorter than they are wide, such as the carpals and tarsals that make up your wrist and ankle). This process also forms the ends of flat and irregular bones (flat bones are flat, such as your ribs, and irregular bones are irregularly shaped, such as your vertebrae). Endochondral ossification is also part of the process that lengthens long bones, as well as the natural healing of small bone fractures.

Intramembranous ossification starts by developing the ossification center, or the point where bone formation starts to occur. The next step is calcification, or the accumulation of calcium to help form bone tissue. This step continues until the bones of our skull are formed. This is similar to snow accumulation. You start with a single snowflake and keep adding more and more until you end up with a few feet of snow! Finally, the periosteum is formed, which is the outside lining of all bones.

Right about the time we're born, a secondary ossification center appears at each end (or epiphysis) of our bones. The cartilage in between the primary and secondary ossification centers is called the epiphyseal plate, or growth plate. These plates (one on each end), continue to make new cartilage, which is replaced by new bone. As this new bone forms, the bone is lengthened, which means we grow! This process is referred to as bone elongation. Once we're 'fully grown' (which doesn't happen until our mid-twenties), this plate is replaced by bone, and our bones no longer lengthen. However, despite the fact that we stop elongating our bones at a certain point, we are constantly strengthening and repairing our bones throughout our lifetime. Endochondral and intramembranous ossification are both essential to this process.

There are two processes that form our bones before we are born: intramembranous ossification and endochondral ossification. Intramembranous ossification is primarily responsible for forming the bones in our skull, and bones are formed from a specific type of connective tissue, called mesenchymal connective tissue. Endochondral ossification not only forms our long bones, short bones, and the ends of irregular and flat bones, but is also responsible for bone elongation after we're born. This is accomplished by a cartilage growth plate, known as the epiphyseal plate.

The Central and Peripheral Nervous Systems