In the last years of the nineteenth century a number of secret societies throughout China took it upon themselves to battle the superior forces of Europe, Japan and the United States. Armed with martial arts skills, members of the Boxer Rebellion brought China into a defining conflict in world history.
Create an account

Background to the Boxer Rebellion

The Boxer Rebellion was a militant uprising within China that lasted from 1898 to 1900. At its core, the rebellion was a grass-roots movement that sought to expel the unwanted influence of Western nations. The rebellion was able to gain wide support amongst the large populations of poor and unemployed in northern China.

The leading force of the Boxer Rebellion was a secret society called the Righteous and Harmonious Fists. Largely made up of poor and unemployed young Chinese men, the society was labeled 'The Boxers' by Western newspapers in reference to the military exercises they practiced. The Boxers focused their anger on anything foreign, particularly Christian missionaries and foreign or Western technology. Many in China saw foreign influence as a corrupting force that was weakening China's culture and government. The Boxers used guerrilla tactics to kill many Christian missionaries and Western diplomats, all in an effort to rid China of foreign interference. Likewise, railroads, Christian churches, embassies, and other foreign property became targeted for destruction.

The Boxers combined spirituality and religion with militarism and martial arts. They relied upon rigorous physical and military training as well as spiritual and religious practices. The Boxers believed they were fighting a righteous and divinely supported cause and that they were impervious to the bullets and swords of their enemies.

There were a number of other anti-foreign societies fighting alongside the Boxers. The Red Lanterns, for example, were a group of young women who also blended spirituality and the marital arts in their struggle against foreign influence. The Red Lanterns, the Boxers and other groups sought to strengthen China through militancy and their belief in the righteousness of their cause.

By 1900, the Boxer Rebellion had spread to the capital of Beijing, forcing the many Western diplomats and Christians in the city to seek refuge inside their embassies and Churches. 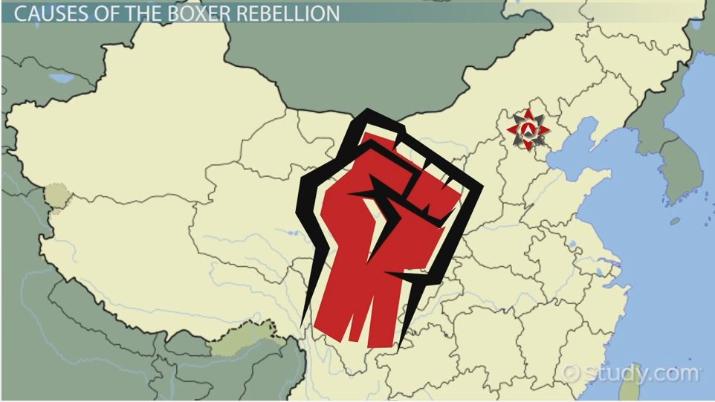 Coming up next: Who was Leon Trotsky? - Biography, Facts & Books

Causes of the Boxer Rebellion

The Boxer Rebellion formed in response to both foreign and domestic internal tensions. Western powers like the US and the nations of Europe had come to wield significant commercial, political, and religious influence across China. Throughout the latter half of the nineteenth century, the Qing Dynasty of China had been subjected to a number of humiliating military defeats at the hands of Western powers. After losing a number of battles to Britain in particular, China had been forced to concede trading rights to European and US commercial interests and to allow Christian missionaries access across China. By the 1890s, many Chinese had come to resent the spread of Christian missionaries and their influence.

However, domestic woes within China inspired the Boxer Rebellion as well. The authority of the Qing Dynasty had been weakening for some time, many regions of the country were subject to extreme poverty and unemployment, and drought had threatened a general famine. Because of these woes, many young men and women across China found good cause to organize a rebellion to expel foreigners and strengthen Chinese society.

The fist spark that set the Boxer Rebellion in motion centered on resentment over missionary activity. In 1897, two German missionaries were killed by rebel Chinese forces in the northern province of Shandong. This led Germany to seek retribution. Soon the Boxers and other societies were stepping up their attacks on foreigners and converging on the capital of Beijing.

By 1898 the rebellion was escalating rapidly, and the leader of China, Empress Dowager Cixi of the Qing dynasty, was caught in the middle of the two warring sides. On the one hand, the Empress and her advisors viewed supporting the Boxers as a way to rid China of foreign influence. On the other hand, maintaining peaceable relations with the foreign powers could lead to new diplomatic relations and agreements that would strengthen and modernize China.

Once the Boxer Rebellion had reached Beijing, Cixi was forced into a decision. The foreign powers took the rebellion as a serious threat to their embassies and churches in the capital city and prepared to mount a coordinated invasion to protect their property and subjects. Rather than allow the foreign powers to enter China unopposed, Cixi put the government's support behind the Boxer Rebellion and declared war on the invading Western nations in June of 1900. Now Boxers and imperial troops were fighting alongside one another for the same cause.

A military coalition of eight nations, Japan, Russia, Britain, France, Germany, Italy, Austria-Hungary, and the United States, arrived in China in August of 1900 and easily defeated the Boxers and Qing forces. The rebel groups and imperial troops were no match for the superior military might of the Western powers.

Because of their military advantage, the Western powers were able to force a series of punishments and unequal treaties on a weakened Chinese government. The post-war agreement was called the Boxer Protocol. The Boxer Protocol forced China to repay the Western nations for the loss of life and property caused by the Boxers. Furthermore, the Protocol allowed foreign troops to be stationed in China's capital permanently. Thus the Boxer Rebellion's aim of expelling foreign influence was largely a failure.

Although the Qing dynasty remained in power for a further 12 years, the Boxer Rebellion was a serious setback that further destabilized an already weak regime. The Boxer Rebellion and its defeat can be seen as one of many factors that led to the eventual collapse of China's last imperial dynasty in 1912.

The Boxer Rebellion was a military movement that sought to strengthen China by expelling all forms of foreign influence. The Boxers were a military and spiritual force that believed their reliance upon traditional spiritual practices would eventually guarantee their triumph over the superior European and American militaries. The Boxer Rebellion quickly led to a larger war in 1900 when the Empress Dowager Cixi of China allied with the Boxers to fight off an invasion of European, American and Japanese military forces intent on suppressing the rebellion. In the end, however, the Boxers were defeated.

The Treaty of Nanjing: Summary & Effects

The Rise of Communism in China

The Japanese Invasion of Manchuria in 1931

The History of Communism in China

The Chinese Revolution and Creation of Taiwan: History & Timeline

Militarization and Nationalism in Japan in the 1920s-1930s