Kaitlin has taught nursing students and has a master's degree in nursing leaderhsip, as well as a bachelor's degree in English literature.

View bio
This lesson will discuss brain contusions - bruises to the brain that cause bleeding or swelling. You will learn about treatment options, recovery therapies, and the outlook and long-term effects of this type of injury. Updated: 01/26/2021
Create an account

You know what happens when you get a bruise on your leg? Perhaps you ran into the coffee table and then the next day you notice a tender black and blue mark that slowly turns purple, then yellow, and eventually fades away. Did you know that the same thing can happen in your brain? A bruise in the brain is called a cerebral contusion, or intracerebral hematoma, and like that bruise, this injury can cause swelling and bleeding underneath the skin. Unlike that leg bruise, the treatment, recovery, and long-term effects of a brain contusion can be very serious.

A cerebral contusion is a type of traumatic brain injury (TBI), which is a potentially serious injury since it causes bleeding and swelling in the brain. This usually results from a large impact to the head, but can occasionally result from long-term high blood pressure or a bleeding disorder. 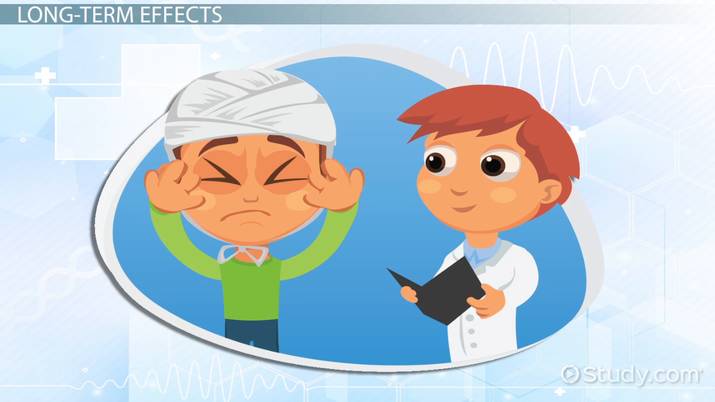 Coming up next: Coup and Contrecoup Injury: Definition & Symptoms

Treatment of contusions depends on the extent of the injury. Doctors diagnose contusions and decide on a treatment based on computerized tomography (CT) scans and a physical examination.

If bleeding and swelling in the brain are minor, treatment is conservative. Patients usually stay in the hospital and are observed for up to a week. Treatment may include ice, rest, and pain medications. The patient will need to be monitored for signs of increased intracranial pressure (ICP), pressure inside the skull. There is only a small amount of room for the brain inside the skull, and even a small amount of swelling can cause pressure to increase, potentially causing brain damage. Symptoms of increased ICP include headache, blurred vision, sleepiness, weakness, and vomiting.

If bleeding is severe, patients often are admitted to the intensive care unit (ICU). Treatments may include: supplemental oxygen, mechanical ventilation, pain relief medications, and sedation. Fever and seizures may accompany a severe contusion and are treated as they arise.

If swelling and pressure are especially severe, it is sometimes necessary for patients to have surgery. In these cases, doctors perform a craniotomy, making a 'trap door' in the brain to relieve pressure caused by bleeding or swelling. Another potential surgery is a craniectomy, removing bone from the skull completely to relieve pressure. Craniotomy is any bony opening that is cut into the skull (cranium) to access the brain underneath. Typically the bone flap is replaced. The main difference between the procedures is that, with a craniotomy, the bone flap is replaced. If it is not replaced, the procedure is called a craniectomy.

While the tender bruise on your leg may heal in a week or two, recovery after cerebral contusions varies widely. It is possible to have no symptoms at all while recovering from a mild contusion, aside from some minor pain or swelling. Severe injuries can result in numbness or tingling, difficulty with coordinating movements, and problems with speaking, attention, or memory.

During recovery, particularly from a severe injury, doctors will want to monitor ICP. This is measured in two ways:

Both devices are attached to monitors that give constant readings of ICP. If the pressure goes up, doctors are able to treat it right away. The device will be removed after swelling goes down.

Results of treatment depend very much on the size and location of the injury. Some people with contusions make a complete recovery. Others can have more long-term problems, including brain damage affecting personality, thinking, and movement. These problems may last for month, year, or a lifetime. They usually improve with time, but the process is a difficult one.

A cerebral contusion, or intracerebral hematoma, is a type of traumatic brain injury (TBI) that is essentially a bruise to the brain causing bleeding and swelling. Unlike a concussion, which is more widespread, contusions are localized to a specific area in the brain. Treatment varies depending on the severity of the injury, and ranges from simply monitoring and observing for signs of increased intracranial pressure (ICP), to mechanical ventilation and sedation, to surgeries such as a craniotomy (creating a 'trap door' opening to relieve swelling) and a craniectomy (removing skull bone to relieve swelling). Recovery involves further monitoring of ICP, potentially with small hollow tubes called ICP catheters or the metal ICP bolt attached to a monitor to provide a continuous measurement. Long-term effects also vary and range from full-recovery to severe impacts on personality, thinking, movement, and the senses. Long-term treatment is necessary for these patients.

This activity will assess your knowledge regarding the treatment options, therapies, and long-term effects of a brain contusion.

For this activity, study the scrambled letters and unscramble or rearrange the letters to form a word or phrase that fits the given clues. To do this, you must right-click and print this page. With a pencil and an eraser, neatly write your answers in the appropriate spaces in the clues.

What Is Ankylosis? - Definition, Symptoms & Treatment

What is a Hypoglycemic Episode? - Causes & Treatment