Millicent has been teaching at the university level since 2004. She holds a Bachelor's degree in Criminal Justice and a Master's degree in Human Resources.

View bio
During the 1950s, the South American country of Brazil experienced a period of economic growth. It was during this time that Brazil's social class system was formalized. This lesson will outline the social class system in Brazil as it exists today. Updated: 04/27/2021
Create an account

The country of Brazil is a popular tourist destination known for its beautiful beaches and colorful scenery. The largest country in South America, and the only one where Portuguese is spoken more than any other language, Brazil currently has a population in excess of 200 million. Although the capital of Brazil is Brasilia, perhaps the most famous city in Brazil is Rio de Janeiro, located in southeastern Brazil and bordering the Atlantic Ocean. Rio attracts about half a million tourists each year during its celebration of Carnival. Carnival is rooted in the Catholic tradition and is a week-long celebration preceding Lent. 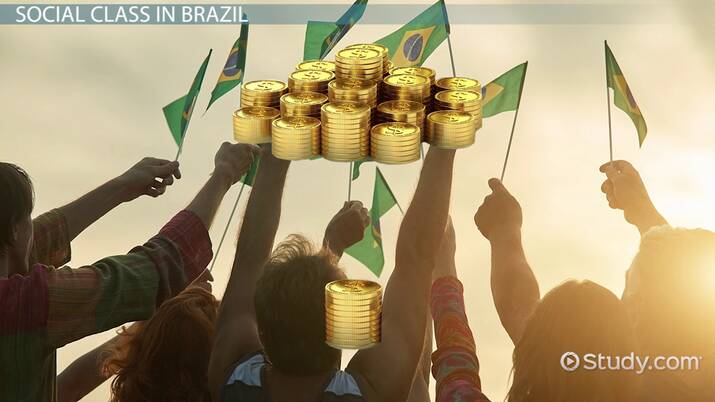 Coming up next: History of Carnival in Brazil

Social class is a status level in society where people in similar occupations with similar educational levels and similar incomes are grouped together. Social class differs among societies, and Brazil's is unique in its own right. The social class system in Brazil was formalized sometime in the 1950s after the country experienced a period of economic growth. Since that time, the economy in Brazil has been rather volatile, experiencing several economic upswings and downturns.

The traditional social class distinction between lower, middle, and upper classes has also been utilized when characterizing Brazilian society according to social class. These three social classes are defined as follows.

Those who belong to the Brazilian upper class are amongst the wealthiest. Upper class citizens are typically professionals or wealthy business owners. They might be doctors, lawyers, or engineers. They're highly skilled and educated, and their children typically pursue a private education at the most exclusive schools. Upper class homes and offices often have separate entrances: those in the upper class use the primary entrance, while those in lower classes would use an entrance that is somewhat hidden. People in Brazil's upper class are expected to be Caucasian.

Those belonging to Brazil's middle class are typically people that are making ends meet. They're not wealthy, but might be able to take an occasional vacation if they save for it. Middle-class Brazilians are typically teachers, nurses, and mechanics with average income levels. Children of middle-class parents get an education like those of the upper class, but they attend public rather than private institutions and don't have equal educational access or opportunities.

Lower-class citizens in Brazil are poor. They have very limited, if any, income and struggle to make ends meet. People in this societal class are expected to be black, and when employed, are typically servants, housekeepers, and low-level laborers. They are largely uneducated, and their children have very limited access to education. Their diet lacks in nutrition and they are, therefore, more predisposed to illnesses.

Social Classes A Through E

While the three social classes—upper, middle, and lower—are frequently used to describe Brazil's society, another system has broken down the social order by letters ranging from A to E, based on median monthly income:

All right, let's take a moment or two to review. Brazil is the largest country located in South America and a very popular tourist destination. Carnival celebrations, which are rooted in the Catholic tradition and is a week-long celebration preceding Lent, in Rio de Janeiro, Brazil's most popular city, draw more than half a million visitors each year. The distribution of wealth in Brazil has never been very equitable, and the economic position of the nation has been largely unstable. After an economic upswing in the 1950's however, a social class system was established, which is a status level in society where people in similar occupations with similar educational levels and similar incomes are grouped together.

The social class system in Brazil has been defined as consisting of an:

Others have broken down the social class system in Brazil even further by defining five classes according to income level using alphabetic class labels ranging from A (most elitist) to E (poor).

A garbage collector in Brazil would likely be characterized as belonging to which of the following classes using the A–E classification system?

Create an informational poster that displays facts about Brazil. Your poster should contain lots of visuals, including a map of Brazil and the location of its capital.

Example: It is known for Carnival, a major religious celebration.

In approximately three to four paragraphs, write an essay that explains the concept of social class, why class stratification has developed in Brazil, and what the features are of upper class Brazilians.

Example: People of Brazil's upper class have professional occupations, such as those in medicine or the law.

Create a chart, poster, or some other type of graphic organizer that lists and describes the characteristics of the A-E social class system in Brazil.

Example: Brazilians in Class D may have limited education, but many did not finish their schooling.

The Class System in the French Revolution

When You Reach Me: Summary & Characters

The Perks of Being a Wallflower: Setting & Themes

Impact of Religion on Business & Economics