Spain is a country with a rich history starting in the early 700s. Explore a brief history of Spain, including its formation, its role as a global power, eventual decline, and its role as a modern county with influence in many other countries today. Updated: 11/01/2021
Create an account

The Formation of Spain

Today Spain occupies the majority of the Iberian Peninsula in the southwestern corner of Europe. Modern-day Spain shares borders with France to the northeast and Portugal to the west. Historically, Spain has been predominantly Catholic but with an extended period of Muslim occupation. Today, the nation is home to several distinct culture groups, including the Basques and the Catalans.

But when did Spain as a distinct political entity come into existence? This is a difficult question to answer because Spain was not formed at once, but rather it was created through a series of processes and pivotal events spanning a period of centuries.

The first major process that paved the way for the emergence of Spain was the Christian conquest of the Iberian Peninsula, which is often referred to as the Reconquista. By the early 700s, much of Iberia had fallen under the rule of the Islamic Umayyad dynasty. The Reconquista was a centuries-long campaign led by a number of small Christian kingdoms to push back the Muslim invaders. From the 700s to the 1400s, smaller Christian kingdoms like Castile, Aragon, and Portugal steadily pushed the Muslims southward towards the Mediterranean Sea. The last Muslim stronghold on the Iberian Peninsula did not fall until 1492.

Dynastic unification was a second key process that helped form modern-day Spain. In the wake of the Reconquista, the Iberian Peninsula had become fragmented into a number of rival Christian kingdoms. Over the course of centuries, a number of alliances and marriages were organized that steadily combined these kingdoms. In 1469, the royal marriage of Ferdinand II of Aragon and Isabella I of Castile united those two kingdoms and eventually led to the creation of Spain. 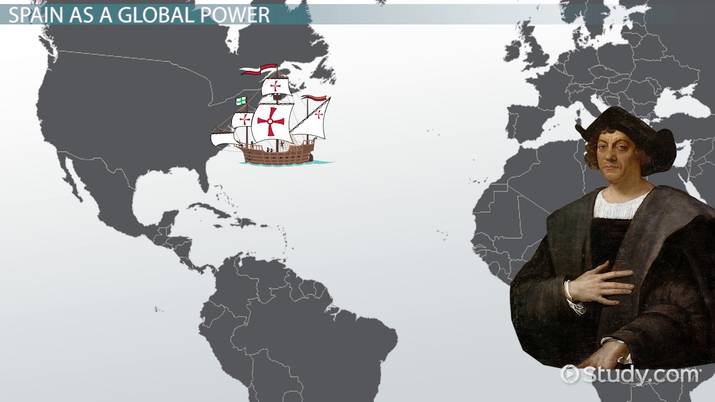 Spain as a Global Power

For Spain, 1492 marks not only the fall of Muslim Granada and the completion of the Reconquista, but also the discovery of the Americas by Christopher Columbus. Although not Spanish himself, Columbus was hired by Ferdinand and Isabella to set off across the Atlantic in the hopes of reaching Asia. Ultimately, Columbus discovered the route to the Americas, not Asia. Nevertheless, his voyages to the New World opened the door to Spain's rapid imperial expansion across the Atlantic and into Central and South America.

By the late 1500s, Spanish Conquistadores had toppled the mighty Aztec and Incan Empires, looted their treasures, and inadvertently introduced deadly diseases from Europe that wiped out millions of Native Americans. At the same time, missionaries worked to convert much of the New World to Catholicism, and the Catholic faith dominates much of Latin America to this very day. By the close of the sixteenth century, much of the New World had fallen under Spanish control.

Trans-Atlantic commerce between the Americas and Spain generated huge volumes of money that the kings of Spain used to further extend the influence of their empire. Charles V (1500-1558) and his successor Philip II (1527-1598) are often regarded as the most successful and powerful of the Spanish monarchs during this period. Under their reign, Spain defeated both the Aztec and Incan empires, circumnavigated the globe, colonized the distant Philippines, won control of the Holy Roman Empire, and gained dynastic control over both the Kingdom of Portugal and the Netherlands.

The Decline of Spanish Power

This primacy was not to last, however. By the close of the seventeenth century, Spain had made many powerful enemies and had greatly overextended its empire. With its resources spread thin, Spain lost control of Portugal and the Netherlands through revolts and rebellions. At the same time, the country was forced to sever its ties to the Holy Roman Empire.

The greatest challenge came from the English, Dutch, and French, each of whom sought to forge their own empires in Asia and the Americas. By the mid-1700s, England and the Netherlands had risen to dominate the seas, while France grew into the most powerful kingdom in Europe.

Spain was set even further back in the early nineteenth century when France invaded and briefly occupied much of the country. Soon thereafter, a wave of rebellions in the Americas saw most of the Spanish empire declare independence and break off into a number of new nations.

By the twentieth century, Spain, like most other European nations, had evolved from a monarchy into a democratically governed nation-state. However, two major events in modern history seriously challenged the order and stability of the country. First, there was the Spanish-American War of 1898, which Spain lost to the United States. Over the course of several decisive naval battles, the USA also won control of the Philippines, Puerto Rico, and Cuba, thus effectively dismantling the last of Spain's once great empire.

The second major event was the Spanish Civil War (1936-1939), a bloody and controversial affair that brought much of the nation into a hotly contested war over political ideals. One side supported the existing Republican government while others supported a militarily backed Nationalist government with ties to Nazi Germany. The Nationalists ultimately won, and a new government was established under the Fascist dictator General Francisco Franco. Franco ruled Spain until his death in 1975, at which point Spain adopted a democratic government under the framework of a constitutional monarchy. Currently, the Spanish monarch is largely retained as a figurehead with no real power or authority.

Let's recap. Spain has been at various times a kingdom, a global empire, and a modern nation. Spain has left a lasting mark on world history, from the kingdom's origins during the Christian conquest of the Iberian Peninsula in the late medieval period, through its days as a global empire under Charles V and Philip II, and right up to the modern day. Presently, Spain is a democratic state with a Prime Minister serving as head of state. All that remains of the Spanish Kingdom is a figurehead monarch, Felipe VI.

The Crown: The Monarchy of Spain's History, Succession & Regency