Since the late 1800s and early 1900s, Broadway musicals and performances have been a staple of the New York City theater scene. Learn about the history of Broadway musicals, the difference between Broadway and Off-Broadway, and Broadway in the 21st century. Updated: 01/13/2022
Create an account

If you've ever seen a Broadway play, either on Broadway, as an off-Broadway production, or as a film adaptation, you know what a marvelous spectacle these performances deliver. However, what makes a play, musical or not, a Broadway production? Is it the play itself, the location of the theater, or something more? The answer might surprise you.

So why are they called Broadway theaters? It's an old tradition. In the late 1800s and early 1900s, the majority of large, successful theaters were located on Broadway, but over the last century, many moved to neighboring streets within the area. 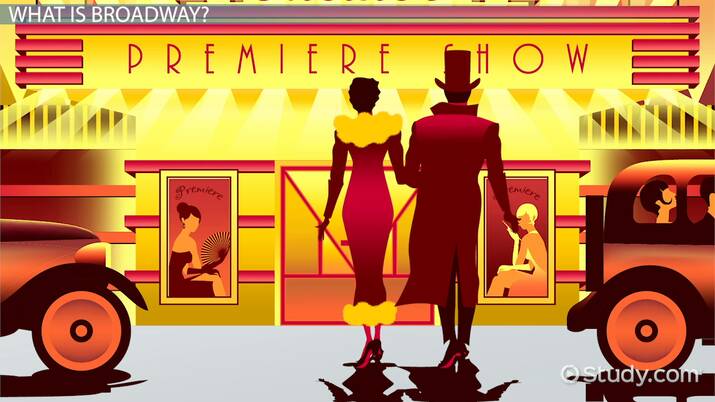 Coming up next: Musical Theatre Lesson Plan for Elementary School

Where It All Began

The origins of Broadway date to the mid-1700s with the formation of a theater company on Nassau Street to perform operas and Shakespearian plays for audiences as large as 280 patrons. While the Revolutionary War temporarily halted New York theater performances, the art returned in full force after the war with the construction of the Park Theater, seating 2,000 patrons, in 1798.

By the middle of the next century, several more theaters had emerged and the popularity of Shakespeare gave way to the first wave of musical performances. Vaudeville, a popular theater form involving song, dance, comedy, and burlesque, also came to Broadway in the late 1800s around the time that plunging real estate prices enticed theaters to buy space on Broadway. This created an expansive district stretching from Madison Square to Union Square, and thus the name Broadway theater came to be.

In the early 20th century, theaters began lighting their marquees with bright lights framing play posters and titles, lending the theater district the name ''The Great White Way''. Unfortunately, the introduction of sound to movies and the popularity of musical performances in the 1920s caused a decline in theater popularity. To compensate, music productions without plots kept the doors open for many commercial theaters.

The decline was short-lived, with the return of musical theater and the dawn of Broadway's golden age ushered in at the end of the Great Depression. Recognition of this resurrection officially came in 1947 with the first Tony Awards, acknowledging achievements in Broadway theater.

Broadway in the 21st Century

Today, Broadway theater thrives in the heart of Manhattan with some of the most successful performances of all time. At present, The Phantom of the Opera, written by Andrew Lloyd Webber, holds the crown for longest running show with over 10,000 performances. A stage adaptation of Disney's animated film The Lion King also tops popularity charts, earning $102 million during the 2015 to 2016 performance season. Hamilton is another great example of Broadway's continued success. Ultimately, Broadway is key to New York City's cultural and financial success, earning more than the metropolitan area's ten professional sports teams combined.

All right, let's take a moment or two to review. Broadway theater, today synonymous with musicals and stage success, refers to performances in any of over 40 commercial theaters in Manhattan that have 500 or more seats. While most theaters once resided on Broadway itself, many are now located on adjoining streets in the theater district. We also learned that off-Broadway theaters generally hold 99-499 seats. Off-off-Broadway theaters, however, hold fewer than 99 seats. So they're all part of New York's theater ecosystem.

The district's nickname, ''The Great White Way'', came from the introduction of lightbulbs framing show posters and theater marquees. With powerful and successful shows like The Phantom of the Opera, The Lion King, and Hamilton, Broadway is far from its humble, colonial origins; its embrace of Vaudeville, a popular theater form involving song, dance, comedy, and burlesque; and its struggles through the 1920s and Great Depression. Today, even Hollywood's biggest stars take Broadway roles in hopes of earning a coveted Tony Award for outstanding achievements in Broadway theater.

The Role of Movement & Dance in Theatre

The Phantom of the Opera: Summary, Characters & Analysis

The Masque of the Red Death: Characters & Setting