Korry has a Ph.D. in organic chemistry and teaches college chemistry courses.

The primary focus of this lesson is on a specific organic chemistry reaction: namely, the bromination of acetanilide. Our goal is to understand how the reaction happens in terms of its mechanism. Updated: 11/08/2019
Create an account

Are you one of those people that likes to know all the details about something, or do you just like to know the bare essentials? For instance, when you're traveling on a road trip, do you need to know where you're stopping, for how long, what you'll do there, etc.? Or do you simply need to know your final destination and leave the details to chance? Perhaps you're not a detail-oriented person, but for some, the beauty is in the details and they must know everything they possibly can about something.

Explanations of organic chemistry reactions can be more basic or more detail-oriented. Some people just want to know that if reactant 'A' is combined with reactant 'B' product 'C' will be formed. Others, though, want to know exactly how 'A' combines with 'B' to form 'C' in terms of the reaction mechanism. A reaction mechanism tells a detailed story of how a reaction happens, and it uses curved arrows to represent electron flow as well as bond-making and bond-breaking events. Today, we will be diving into the reaction mechanism behind the bromination of acetanilide and exploring how the reaction happens in terms of its mechanism. Let's go get those details! 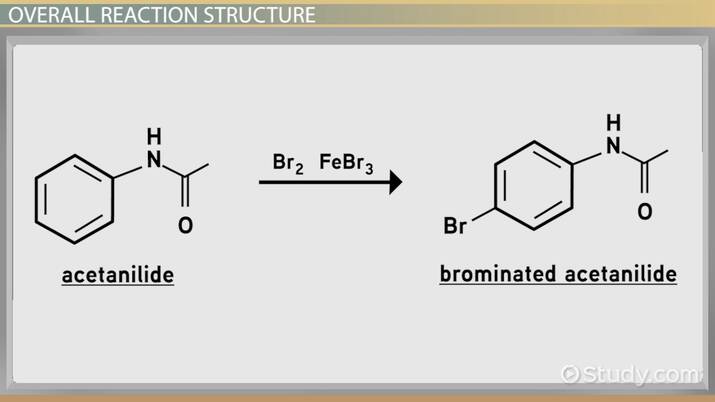 Coming up next: Hydrolysis of Acetanilide: Mechanism & Explanation

Just like when you plan a road trip, you look at where you're starting and where you want to end up. Let's do the same with bromination (which is basically just the addition of a bromine atom) of acetanilide to get a big-picture idea of what's going on. In this specific reaction, we're taking the compound known as acetanilide and adding a bromine atom to the benzene ring. This particular reaction won't happen all on its own, so we employ the use of an iron (III) bromide (FeBr3).

Notice that we need molecular bromine (Br2) as well for the reaction to happen, which we will discuss in the coming sections.

Now that we have a big-picture idea of what's going on for this reaction, let's break down the steps of the mechanism to see exactly how we get from the starting point to the end product.

The first thing we need to generate is a bromine species that is electrophilic. In organic chemistry, an electrophile is anything that has some sort of positive charge character that can react with a nucleophile, while a nucleophile is something that has negative character and donates electrons. Here's where our catalyst comes into play. A molecule of bromine reacts with the FeBr3, and when this happens, notice how one of the bromine atoms now has a positive charge. This is our electrophilic bromine species.

In the next step of the reaction, a pair of electrons located inside the benzene ring of acetanilide acts as our nucleophile (source of electrons) and attacks the electrophilic bromine intermediate we formed in the previous step. When we use those electrons to form a new bond to bromine, there is now a positive charge on one of the carbon atoms in the ring because it lost electrons. The two most important hydrogen atoms on the benzene ring have been shown for clarity.

3. Deprotonation to Reform the Double Bond

In the last step of the mechanism, the negatively charged iron-bromide species used previously acts as a base to pull off the hydrogen atom (deprotonate) bonded to the carbon bearing the new bromine atom. When this happens, we form a double bond and regenerate the aromatic nature of the ring system.

Note how after the final step, we regenerate our FeBr3 molecule (our catalyst), which can be fed back into the reaction cycle and start the process all over again with another molecule of bromine and acetanilide.

Let's take a couple of moments to review what we've learned. In this lesson, we explored in detail how the bromination (which is the addition of a bromine atom) of acetanilide happens in terms of all the bond-making and bond-breaking events. The overall reaction involves acetanilide, molecular bromine, and an FeBr3 catalyst. An important thing to remember is that the bromine atom always gets attached to carbon number 4 of the benzene ring after the bromination reaction takes place. The mechanism occurs in three distinct steps:

What is Acetylation? - Mechanism & Definition