Buddha was an Indian philosopher whose moral teachings inspired the birth of a major world religion, Buddhism. Explore India before Buddha, review his early life, discover his Enlightenment, and learn about his teachings. Updated: 10/26/2021
Create an account

The sixth century BC was a time of great change in Northern India. The region was gaining extended contacts with the greater world, while a new group of invaders from the North, the Aryans, were still making their presence known, most notably on the predominant faith of India, Hinduism. However, in the coming years, a challenge to mainstream Hindu thought would emerge from an unlikely place, and while it would never unseat Hinduism as the dominant faith of India, it would make its influence known throughout all of Asia. This new faith tradition was known as Buddhism after its founder, Siddhartha Gautama, or more simply, the Buddha. 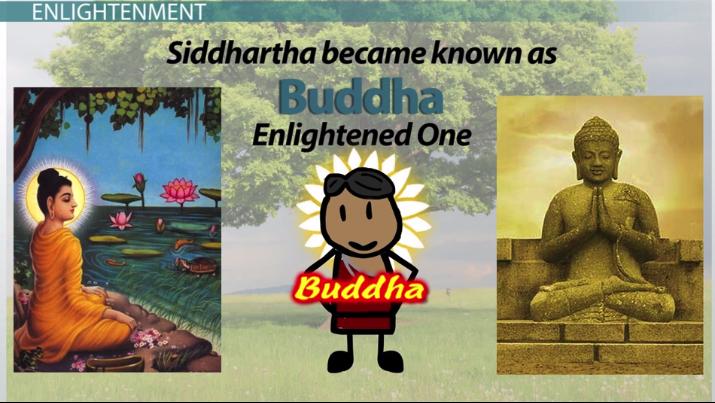 Coming up next: Buddhism's Spread in India, Ceylon & Central Asia

Early Life of the Buddha

The person who would eventually become known as the Buddha was first known as Siddhartha Gautama and was a member of the Brahmin caste of Indian priests and princes that ruled much of Northern India. According to legend, Siddhartha's father was warned to guard his son from any sign of human suffering and went to great lengths to do so. The future Buddha entered adulthood, married and fathered a son without knowing that people suffered, got sick or died. That is, until one day, when he sneaked out of the palace grounds.

Upon leaving the palace, Siddhartha found an old man, someone dying and a body being prepared for cremation. These all shook up the young prince, but what really got his attention was that amidst all this suffering, a humble holy man, asking only for food and wearing rags, was the only person who he saw to have any real inner peace. Immediately, Siddhartha abandoned his life of luxury, including his family and spent years begging and fasting, trying to figure out what the meaning of life was. In this, Buddhists point out, he went from the extreme of living lavishly to living poorly. In neither extreme was Siddhartha able to find any sort of truth.

Finally, Siddhartha sat down under a great tree and began to meditate. For 49 days, he was lost in deep contemplation, tempted by demons, all the while searching for what he could find as truth. Finally, after 49 days, he achieved enlightenment, the state of knowing the truth about life, and therefore, escaping having to live life after life, or reincarnation. From this point on, Siddhartha became known as Buddha, or Enlightened One, and began to preach what he had learned.

Buddha would later point to his experiences during his years of wandering as signs that led him to the ideals that he taught, namely that living life in a middle way could help one achieve enlightenment. He said that he knew he had never been truly fulfilled as a prince, but felt that life had little meaning when left to starve for food as a beggar. Likewise, he related a story he had overheard while begging that a string on a musical instrument pulled too tightly would snap, but too loosely would not play a quality note. Instead, just as in life, a middle ground must be sought.

The Buddha offered his followers guidance through the Four Noble Truths, about the meaning of life. In these, the Buddha taught that life was filled with pain and suffering, which ultimately was a symptom of unfulfilled wants and desires. As a result, the best way to end suffering was to put an end to desires and wants, which can be accomplished by following the eight steps of the Noble Eightfold Path.

As you might expect from the name, there are eight guidelines in the Noble Eightfold Path. These are to recognize that the Four Noble Truths exist, commit to becoming a better person slowly over time, speak the truth, do no harm, choose a job that doesn't harm others, focus on self-improvement, strive to see things clearly and strive to achieve enlightenment.

Buddhism did keep some ideas of Hinduism, however. Reaching enlightenment, also often called Nirvana, much like Hinduism, would result in an end to the constant cycle of being born and reborn. Likewise, the failure to achieve enlightenment in a given lifetime would result in reincarnation, or rebirth of the soul in a different being, later, with the status of that rebirth based on karma, or the greater good or evil accomplished by the soul in past lives.

In this lesson, we learned about the life of Siddhartha Gautama and how he went from a prince to a pauper to the founder of Buddhism as the Buddha, or Enlightened One. The idea of enlightenment, also called Nirvana, was discussed, as was the role of reincarnation in Buddhism. We also discussed the Four Noble Truths, as well as the Noble Eightfold Path and the role of each in achieving enlightenment.

Ensure that when you finish this lesson, you have the capacity to:

Gautama Buddha: The Founding of Buddhism

Buddhism: The Middle Way to Enlightenment

What Is the Silk Road? - Goods & Ideas Crossing China