Caroline has been teaching college biology for nearly 15 years. She has earned master's degrees in Anthropology & Biology (79 gsh) and a PhD in Community College Leadership.

The Bundle of His

Feel that thump, thump, thumping in your chest? The heart is a complex organ that is controlled and regulated by the autonomic nervous system. We often take for granted 'that our heart will go on and on', but what are the underlying forces at play that regulate the rate and force at which the heart beats? It's the work of the intrinsic conduction system . Housed in the atria are the sinoatrial node, the internodal pathways, and the atrioventricular node. Bundle branches and Purkinje fibers are found in the ventricles. In between the atria and ventricles is the bundle of His. Together, they set the pace of the heart's contractions. The intrinsic conduction system begins at the sinoatrial node, travels through the internodal pathways, then to the atrioventricular node, bundle of His, bundle branches, and finally the Purkinje fibers. 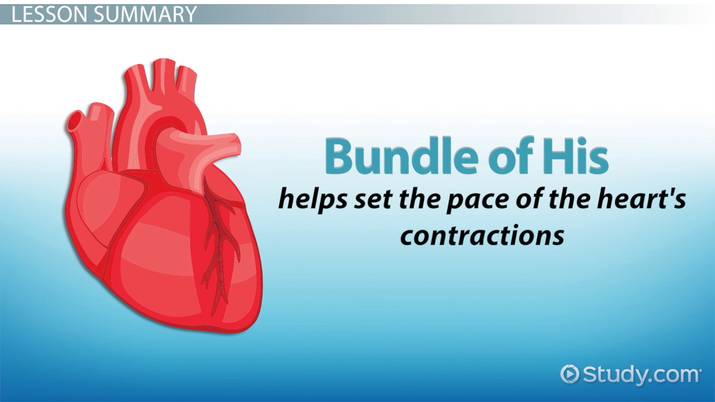 Coming up next: Digestive System I: The Upper Gastrointestinal Tract

The contraction of the heart is facilitated by the hard work of two types of cells operating together to keep the body supplied with blood.

The first are pacemaker cells, which are made up of specialized heart muscles that are self-excitatory and controlled by the autonomic nervous system (such as heart rate increases during a fight-or-flight response). You can think of these cells as the bosses because they set the pace of the heart's contractions.

At rest, pacemaker cells have an electrical charge of -60 millivolts (mV). The heart's pacemaker cells begin in an area located at the convergence of the opening of the superior vena cava in the right atrium called the S-A node. These specialized cardiac muscle fibers travel from the S-A node to the A-V node via three internodal pathways. As the electrical impulse enters the A-V node, there is a delay of 0.09s which allows time for the atria to empty into the ventricles.

From the A-V node, the impulse enters the penetrating portion of the bundle of His where there is another brief delay of 0.04s as it enters the fibrous tissue separating the atria and ventricles before the impulse passes into the ventricles.

The second are myocardial cells, the cardiac muscle cells themselves. They can be considered worker cells because they respond to the impulses of the bosses, the pacemaker cells. At rest, the myocardial cells have an electrical potential of -90mV. These cells' electrical charges vary based on the concentration of ions (for example sodium, calcium, potassium) inside and outside the cells. The impulses propagated at the sinoatrial node travel through the rest of the intrinsic conduction system and synapse with myocardial cells to trigger the heart's contraction.

The Bundle of His Function

Thanks to the teamwork of pacemaker and myocardial cells, the heart is able to pump blood to all your body's nooks and crannies. Each time our heart beats, its ventricles eject about 80 milliliters (mL) of blood. At 65 beats/minute, that equals about 5 liters (L) per minute. The average person's blood volume is roughly 7% of their body weight, so a 150lb/73kg individual will have a total blood volume of around 5L. If the heart pumps 5L of blood per minute, then the body's entire blood volume is pumped through the heart each minute. This amazing feat is made possible, in part, by the bundle of His.

The bundle of His is an important player in the function of the heart. It's the intermediary between the atria and the ventricles. The bundle of His ensures that the electrical impulse propagated at the S-A node travels in just one direction at the correct time interval.

You might be wondering what it is that is so special about the bundle of His. There are a couple of characteristics that separate it from the other cardiac cells:

For one, the penetrating portion of the bundle of His conducts electricity much more slowly than the S-A (sinoatrial) node, internodal pathways, A-V (atrioventricular) node, bundle branches, or Purkinje fibers. This is due to the limited number of gap junctions (connections) which act as electrical insulators and prevent the electrical signal from spreading into the muscular tissue of the heart.

Let's take a couple of moments to review what we've learned. The bundle of His helps set the pace of the heart's contractions and is part of the intrinsic conduction system of the heart. The intrinsic conduction system regulates the rate and force at which the heart beats. The bundle of His works in conjunction with the S-A node, S-A meaning sinoatrial; the A-V node, A-V meaning atrioventricular; bundle branches; and Purkinje fibers to set the pace of the heart. This is all facilitated by the pacemaker cells, which are made up of specialized heart muscles that are self-excitatory and controlled by the autonomic nervous system and myocardial cells, which are the cardiac muscle cells themselves. In the end, the bundle of His is just one piece of a big, complicated organ we call the heart.

Cochlea Function & Location | What Does the Cochlea Do?

Joint Movement & Structures | What are the 3 Types of Joints?

Chemoreceptors Location & Function | What are Chemopreceptors?

Endocardium Overview, Parts & Function | What is the Endocardium?