Butane is a flammable alkane gas that is commonly bottled and used as fuel. Learn about butane's chemical background, structure, formula, and properties. Updated: 10/28/2021
Create an account

Have you ever gone camping and needed a lighter to get your cooking grill started? Widely available in stores, you may have come across a type of lighter called a butane torch or butane lighter. This product is made of the compound we will be discussing. Butane is a hydrocarbon compound classified as a type of alkane. Alkanes are hydrocarbons that consist of carbon atoms single bonded to each other. Don't be alarmed if you can't find a double or triple bond in the structure of an alkane compound. They're not present in alkane molecules, such as butane; only single bonds are present.

Regarding the source of butane in our environment, it's found deep within our earth's ground as a natural gas. When drilling deep into the ground, natural gases can be trapped and used in industry for a variety of commercial products. The following diagram illustrates where butane gas may be found and trapped for industry use:

You could find butane gas in the following three sources you may be familiar with:

Another source is in the production of gasoline blending to make gasoline fuel for commercial use. Keep in mind that when used for the production of commercial items, butane gas is often mixed with other gases, such as propane. When mixed, it's no longer in its pure form, but is instead considered a liquefied gas. Speaking of liquefied gases, would you be surprised if I told you butane can be a gas and liquid at the same time? It sure can! First, let's go over the structure and formula of butane. We will then discuss what butane liquefied gas is. 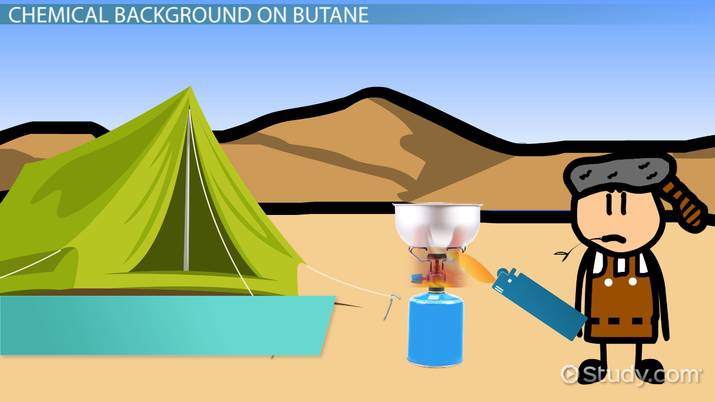 Coming up next: Hydroxide: Definition & Formula

Structure and Formula of Butane

Butane's molecular formula is C4H10. The structure of butane is shown in the new diagram below:

It's worth noting that butane is also referred to as n-butane. Don't be fooled by the term n-butane. Although it's a different name, butane and n-butane refer to the same compound. Based on the diagram, butane is considered to be an alkane. It not only contains single covalent bonds, but also has carbon and hydrogen atoms present in its structure.

When comparing both structures to one another, isobutane is a branched chain, while butane is a linear chain.

At room temperature, butane is a gas that is not only colorless, but also highly flammable and able to burn readily. If you happen to take a whiff of butane gas, you will most likely compare its smell to that of a gasoline odor. Going back to flammability, butane has a flash point of -60 degrees Celsius. The flash point of a chemical refers to the lowest temperature at which it can become ignitable following its mixture with air. Hence, at this temperature (-60 degrees Celsius) when butane gas mixes with air, it is easily ignited and highly flammable. The molecular mass of butane is 58.12 g/mol. It has a boiling point of -1 degree Celsius and a melting point of -140 degrees Celsius.

A very interesting property of butane is its ability to be a liquefied gas. But how can a gas be a liquid at the same time? The process is called liquefaction. Liquefaction occurs when you take a gas, such as butane, and cool it down to the point at which it becomes a liquid. This process of liquefying butane is very useful when the need to transport butane gas is required. For example, in the gas industry, liquefied gas containing butane is transported across our oceans and roads as it makes its way towards a final destination, such as a gas station.

Let's review what we've learned. Butane is a hydrocarbon classified within the alkane functional group family. Alkanes are hydrocarbons that consist of carbon atoms single bonded to each other. Butane is found as a natural gas deep in the earth's surface. Butane is also referred to as n-butane, or normal butane. Common uses for butane gas include lighter fuel, cigarette lighters, and gasoline production. The molecular formula for butane is C4H10. Butane has a constitutional isomer, which is a type of isomer where the order of bonds or connectivity of atoms is arranged in such a way to produce different structures, named isobutane. Remember also that an isomer is a different structure of a molecule whose chemical formula remains the same. As a gas, butane is colorless with a gasoline-like odor. It is highly flammable and ignitable when mixed with air, the latter determined by its flash point, which is the lowest temperature at which it can become ignitable following its mixture with air. Butane can be processed as a liquefied gas in a process called liquefaction, which is when you take a gas, such as butane, and cool it down to the point where it becomes a liquid.

Pentane Isomers & Formula | What is Pentane?

Butene Formula & Structure | What are the Isomers of Butene?

Pentene Formula & Structure | What is Pentene?

Alkene Formula & Properties | What is an Alkene?