Lesson Transcript
Instructor: David White
Cabaret is a style of performance that emerged from France in the 19th century. Through this lesson, you will explore some of the history of cabaret and gain insight into the different styles that are incorporated into the performance. Updated: 06/18/2022
Create an account

Few styles of entertainment are as clearly associated with a particular image as cabaret. The mere mention of the term is likely to evoke clear, strong images of Liza Minnelli's portrayal of nightclub performer Sally Bowles in the 1972 film adaptation of the 1966 Broadway musical Cabaret. As iconic as Minnelli's performance is, the style of cabaret has a fascinating history and is much more diverse than a single performance.

Cabaret is a style of entertainment that often includes a collection of short performances of music, theater, and dance strung together over the course of the performance. Cabaret acts are usually performed by a group of people, like an acting troupe or dance company, and occur in a small informal environment like a nightclub or small venue.

The style emerged in France during the 19th century, but over time it has traveled across Europe and into the United States. Though it's now considered a type of performance, the word ''cabaret'' was originally, in earlier centuries, a reference to a kind of restaurant or bar that served alcohol with meals. Occasionally, these establishments included a short performance during the meal, like music or magic. By the late 19th century, beginning with Le Chat Noir, the original cabarets evolved into what we know them as today. 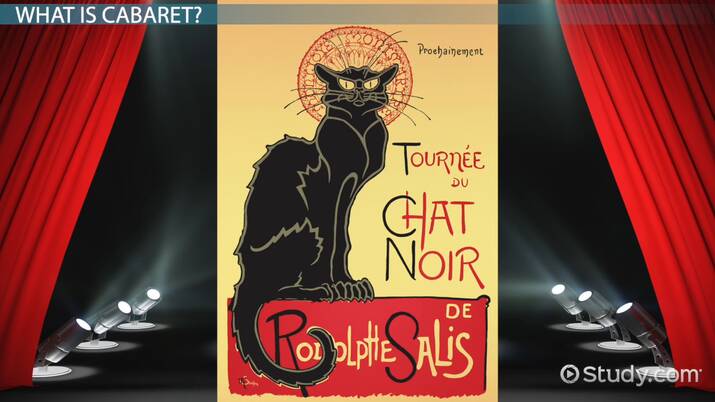 Try it now
Back
Coming up next: Charlie Christian: Biography & Guitar Method

Opening in 1881, Le Chat Noir (meaning ''the Black Cat'') was originally a type of salon, a gathering place for artists and intellectuals from around Paris. In its earliest days, writers, composers, and performers would meet informally at Le Chat Noir to share their ideas or test out new material. Like the cabarets of previous centuries, Le Chat Noir served food and drinks, so patrons would often pay for the meal and get an informal show at the same time.

After four years, Le Chat Noir had become a popular nightspot and outgrew its original location and they moved a few doors down into a larger space. The popularity of Le Chat Noir grew substantially once they moved and began to attract larger audiences and more prominent artists, with the club's owner serving as the host of each performance, also known as the Master of Ceremonies, a role that has become a staple of cabaret performance. Le Chat Noir closed down in 1897, shortly after the death of the owner, Rodolphe Salis.

The popularity and success of Le Chat Noir inspired the opening of other cabarets around France, most notably the iconic Moulin Rouge, or ''the Red Mill,'' which opened in 1889. During the later decades of the 19th century, there was a great deal of optimism and enthusiasm for culture and celebration in France, which is demonstrated in the opulent architecture and extravagant interior design of the Moulin Rouge.

Although Le Chat Noir was the first cabaret to open in France, the performances at Moulin Rouge are more in line with what people picture when they hear the word cabaret. The cabaret shows at Moulin Rouge were big productions influenced by circus performances, yet because of the small environment, the shows remained personal and intimate. Most significantly, this is the birthplace of the can-can. As a staple of cabaret, the can-can is a fast-paced synchronized dance in which female dancers lift or move their skirts in a suggestive manner.

As cabaret began to gain popularity around Europe and the U.S., it remained heavily influenced by the performances at Le Chat Noir and Moulin Rouge. First and foremost, cabaret has never really been a family friendly type of performance. Because it grew from the nightclubs and cafes of Europe, it can include a variety of adult themes, some of a sexual nature. For example, in the U.S., burlesque dancing, a type of provocative and sexually suggestive dance, is often incorporated into cabaret performances.

Because it's a type of variety show that has evolved and transformed over many years, defining the style and themes of cabaret is rather difficult. In the late 19th and early 20th centuries, for example, cabaret was focused on fun and entertainment, a celebration of art and culture. Audience members could interact with the performers and make requests, making it very intimate and informal.

Having said all of that, cabaret is not merely a talent show strung together; rather, it does have a certain structure and pacing. Like other types of theatrical performances, the cabaret show has a beginning, middle, and end, often culminating in a big finale that brings it to a close.

As mentioned, cabaret follows a variety show format, which means that it can include a diverse collection of performance and music styles. However, when it comes to the music, it's important to keep in mind where the performance is taking place. Given the small and intimate environment, there is generally not space for a large orchestra or loud or overwhelming music.

Many cabaret performers choose to incorporate jazz music that can be accompanied by a trio or combo. This allows for the singer to be the focus of the attention. Equally important is that the music should fit the theme and atmosphere of the performance. For example, if it's a show influenced by the 1930s, the singer might choose pop standards or something from the Great American Songbook, like Cole Porter.

All right, let's now take a moment or two to review. Cabaret is a style of performance that emerged from the cafes and nightclubs of France during the late 19th century. Inspired by the early performances at Le Chat Noir and Moulin Rouge, modern cabaret has a variety show format that's kept together by the Master of Ceremonies, who is typically the club's owner serving as the host of each performance.

The style, themes, and music of cabaret can vary greatly depending on the particular show and performers, but they almost invariably contain adult themes. The can-can, for example, is a fast-paced, synchronized dance in which female dancers lift or move their skirts in a suggestive manner. We saw how the can-can is typical of the burlesque dance style, a type of provocative and sexually suggestive dance incorporated into many cabaret performances.

History of Orchestra Timeline & Development | What is an Orchestra?

History of Orchestra Timeline & Development | What is an Orchestra?