In this lesson, you will learn how to calculate the boiling point of a solution using a simple equation. Additionally, you will review the concepts of solutions, molality, and electrolytes.
Create an account

The boiling point of a solution varies depending on how much of each substance is present. There are two things that are always true, however: The boiling point of a solution is always higher than the pure substance, and it can be calculated relatively easily. Before we dive into equations, let's review a couple important ideas regarding solutions.

A solution is a homogenous mixture between two substances. The solute is a small amount of substance that is dissolved in another. The solvent is the liquid which dissolves the solute, and it occurs in a large quantity.

If you were making chocolate milk by adding two ounces of chocolate syrup to eight ounces of milk, the syrup is the solute and the milk is the solvent.

One of the most important properties of a solution is the ratio of solute to solvent, also known as the concentration. The letter 'm' represents molality (m), which is a means of expressing concentration that compares moles of solute to kilograms of solvent. The equation for molality is: m = mol solute/kg solvent. 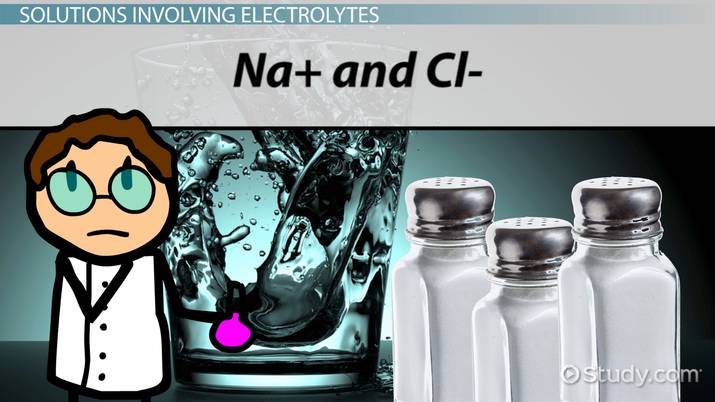 Coming up next: Acids and Bases

The rather simple equation for determining boiling point of a solution: delta T = mKb.

Delta T refers to the boiling-point elevation, or how much greater the solution's boiling point is than that of the pure solvent. The units are degrees Celsius.

Kb is the molal boiling-point elevation constant. The value of Kb depends on the type of solvent present and nothing else. Since it's a constant, its value is always the same; you look up Kb for the solvent involved in a solution and plug the number in. It has the units degrees Celsius kg/mol. Here is a table of some common solvents, their normal boiling points and molal boiling-point elevation constants.

Lastly, m refers to molality. The units are mol/kg. Molality is an important concept in determining the boiling point of a solution. This is because the amount of solute present is what determines the boiling point. The identity of the solvent is not important.

Let's imagine we need to determine the boiling point of a solution made of 36 grams of glucose dissolved in 300 grams of water. Let's list all the information we know about this problem, then solve it.

Let's study the equation for a second. We're solving for delta T and we already have Kb. All we need to do is determine molality and plug it into the equation.

To find the moles solute we divide 36 grams of glucose by the molar mass of glucose, or 180 g/mol. This is equal to 0.20 mol of glucose.

Now, we can plug in our mol of solute and or kg of solvent into our molality equation:

Now that we have our molality, we can plug it into the boiling point elevation equation to find delta T, which equals 0.51 degrees Celsius kg/mol x 0.67 mol/kg.

Great! We have found the change in temperature to be +.34 degrees Celsius. This, however, isn't the new boiling point. To find that, we must add delta T to the boiling point of pure water.

Electrolytes are ionic compounds that break into their constituent ions when dissolved in water. This complicates our boiling-point elevation equation, but not much. Let's consider what might happen if we make a solution of sodium chloride (NaCl) in water. When the salt dissolves in water, two ions (Na+ and Cl-) are produced for every one NaCl compound dissolved. The splitting apart of ions affects the molality.

Most of the time, a problem involving an electrolytic solution will assume complete dissociation of the ionic compound. Sometimes a problem will require the use of a van't Hoff factor that accounts for incomplete disassociation.

For a 0.05 molar solution of NaCl, for example, we would expect the solution to disassociate in a 1:2 ratio, as shown in the image below:

In actuality, the dissociation ratio is 1:1.9.

A problem may ask that you assume complete dissociation, in which case you would use 2 for the value of i. Other times, you may have to use a given van't Hoff factor if assuming incomplete dissociation. These values should be given to you in a table or chart.

Delta T is the change in temperature in Celsius, m is the molality of the solution in mol/kg, and Kb is the molal boiling-point elevation constant for the solvent. The units for Kb are degrees Celsius kg/mol.

Kb is a constant that is unique to the solvent. It is found by looking at a table. Once delta T is determined, its value is added to the boiling point of the pure solvent.

If an electrolyte is the solute, then the boiling-point elevation equation must be modified to account for the dissociation of the electrolyte. The van't Hoff factor, i, is added into the equation for electrolytic solutions.

Acid-Base Buffers: Calculating the pH of a Buffered Solution

How to Calculate Boiling Point

Phase Diagram of Water vs Other Substances: Differences & Meaning

Predicting the Entropy of Physical and Chemical Changes