The average rate of change in a given function is helpful to identify speeds and other changing variables. Learn why these are used, and how they are calculated and interpreted through examples. Updated: 11/09/2021
Create an account

What Is an Average Rate of Change?

So you're planning a trip from Boston to New York. You know that the distance is around 215 miles. Still, you're curious as to what speed you'll have to go in order to get there in 4 hours. It turns out that you've got a birthday party to make it to. Now, as important as that birthday party may be, you won't be going the same speed the whole time. After all, it's doubtful that you'll be leaving your driveway at 60 miles per hour.

Although your instantaneous speed, your speed at any given instant, may be important to state troopers looking to hand out high-priced driving tickets, it is not really that important here. Instead, we are looking for your average miles per hour over a multi-hour trip. An average speed is an example of an average rate of change, which is the difference of change of a quantity over the time it is changing. 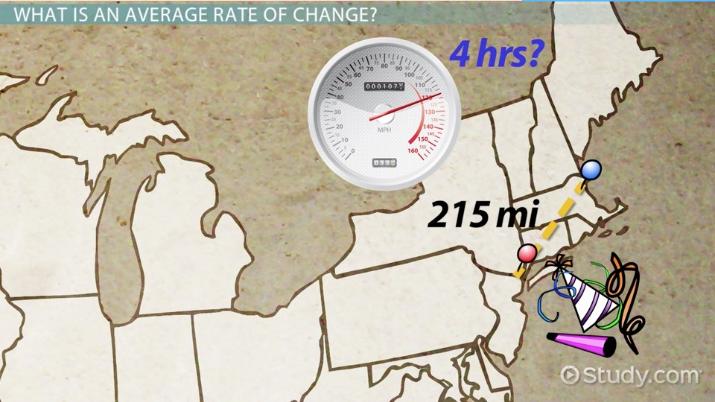 Coming up next: Finding Instantaneous Rate of Change of a Function: Formula & Examples

Why Use an Average Rate of Change?

Average rates of change are important for more than just trip planning. Let's say you were trying to fill up a new swimming pool. Wouldn't knowing the average rate at which your water hose can supply water help you figure out how long it would take you to fill your pool to fill up? In this example, the rate at which the hose supplies water is an example of a rate of change.

Or perhaps you're planning on lifting weights to gain muscle. Very often, you'll hear medical professionals advise against gaining more than a pound or so of muscle a week, on average. That extra pound may come as a half a pound one week or even two pounds the next. However, as long as it all averages out to around a pound a week over a period of time, many medical professionals won't be too alarmed.

How to Calculate Average Rate of Change

Luckily, being able to find an average rate of change is a pretty easy thing to do. Simply put, you just find the difference between the quantities at two different points, then divide that by how much time elapsed between those two points.

Examples of Average Rate of Change

For our first example, let's say that you were trying to find the rate at which a business was growing. In its first year, it made $100,000. However, in its third year, it made $400,000. So what is the company's rate of change?

Now let's try a negative example. Say that you were cleaning out your closet. At the start, you had 12 boxes in there. Two hours later you've only got 4. What's your rate of change? Again, remember to subtract the earlier quantities from the later quantities. Let's run through that math.

So, the total change in boxes is 8 since that's how many boxes you moved in the time frame of 2 hours. That gives you -8 boxes and 2 hours. Divide the boxes by the number of hours, so you get -8 divided by 2. That simplifies to -4 boxes per hour. In effect, you were losing 4 boxes an hour.

In this lesson, we examined the concept of average rates of change, which is the difference of change of a quantity over the time it is changing. Remember:

End Behavior of a Function: Rules & Examples | How to Find End Behavior

How to Find the Maximum Value of a Function | Practice & Overview