Bridgett has a PhD in microbiology and immunology and teaches college biology.

Cells typically only have one nucleus, but in some cases they may have multiple, thus becoming multinucleated. Observe the examples and functions of multiple nuclei in various human cells, as well as fungi and hyphae cells. Updated: 12/14/2021
Create an account

The nucleus is often called the control center of the cell. It stores DNA, the genetic information that tells a cell how to live its life. The DNA can be considered the blueprint for making everything the cell needs to produce. The nucleus, therefore, is essential to a cell being alive.

In biology class, we often hear that every cell in the human body has one nucleus with identical DNA. But the most important rule in biology is: There is always an exception to the rule. Some human cells have no nuclei at all, like red blood cells. Others, however, such as liver cells and some muscle cells, are multinucleated, meaning they have multiple nuclei. 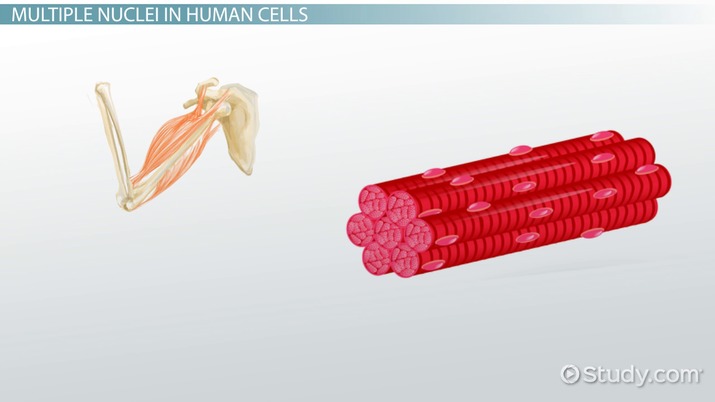 Coming up next: Do Cnidaria Have Germ Layers?

Hepatocytes, the cells found your liver, have a lot of jobs. They make proteins for digestion, help remove harmful stuff from your blood during a process called detoxification, produce enzymes to digest fats and carbohydrates, and store carbohydrate energy for the body. Liver cells often have two nuclei so they can more efficiently do all these jobs. Having two nuclei is like having two sets of blueprints, so the cells can build two proteins at the same time.

The muscle cells attached to your skeleton and that help you move your body have multiple nuclei. Skeletal muscle is composed of long, fiber-like cells, which fuse together as they're made. This means that each muscle cell has more than one nucleus because it is really made of several combined cells. In addition, the muscle cells that make up your heart often have two or three nuclei. Although cardiac cells have fewer nuclei than skeletal muscle cells, they are still considered multinucleated.

Osteoclasts are cells that help break down bone tissue. They help the body get rid of old tissue and recycle the calcium and other minerals to be used over and over again. Like skeletal muscle cells, osteoclasts are often fused together and, as such, have two nuclei.

Other cells in the human body can have multiple nuclei when something is going wrong. For example, if a cell cycle becomes unregulated, like during cancer or a viral infection, a cell may not divide properly and end up with two or more nuclei. An argument can be made that a schizont, a human liver cell infected with many rapidly replicating malaria parasites, has multiple nuclei.

Multiple Nuclei in Other Cells

There are millions of other organisms on Earth, and some of them have cells with multiple nuclei, too. Molds, for example, are a type of fungus that have multinucleated cells. Molds are considered filamentous fungi, meaning they have long, filament-like strands called hyphae that are similar to the roots of plants. The hyphae stretch out to gather all the nutrients they can for the fungus.

While most cells in our body have one nucleus, there are always exceptions to the rule. Liver cells, muscle fibers, and osteoclasts are all normal cells that often have more than one nucleus. Cancerous cells and those infected with viruses can also have multiple nuclei at times. In addition to human cells, certain types of fungi have multinucleated cells. as well.

Can a Cell Have More Than One Nucleus?
Related Study Materials

Cell Types & Structure | Do All Cells Have a Nucleus?

What Is a Colony-Forming Unit? - Definition & Purpose

G0 Phase of the Cell Cycle Definition & Overview | What is G0 Phase?

Synapsis & Crossing Over in Meiosis