The Cannizzaro reaction is a reaction between two aldehydes forming a carboxylic acid and an alcohol. We will learn how this reaction occurs and the mechanism by which it occurs.
Create an account

Your clothes made from polyester and a nitroglycerin bomb surprisingly have something in common. They both rely on the Cannizzaro reaction to be made. The Cannizzaro reaction is when a non-enolizable aldehyde reacts with itself in a strong base, such as sodium hydroxide (NaOH), to form a carboxylic acid and an alcohol. A non-enolizable aldehyde is one that has no alpha hydrogens available for the aldehyde to form an enol. Remember that an enol is when the carbon next to the aldehyde, the alpha carbon, has a negative charge.

Many aldehydes have a carbon next to them that has a hydrogen attached. This is the alpha hydrogen. This hydrogen can be removed fairly easily, due to resonance stabilization, which is when the charge can be shared between atoms, forming an enol. However, if there are no alpha hydrogens attached, the enol cannot form, and the reaction occurs differently. This is the case for the Cannizzaro reaction. 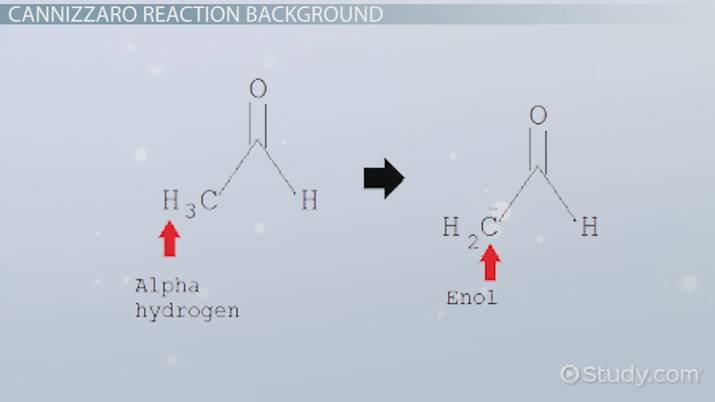 Coming up next: Friedel-Crafts Acylation Reactions in Synthesis

Carbon would now have extra electrons, so the electrons from the double bond bump up onto the oxygen, giving the oxygen a negative charge.

The second step can seem kind of confusing because three things happen at once. However, what is really happening is just a hydride transfer. This occurs when the hydrogen from the aldehyde with a new OH group gets transferred to another aldehyde. So the three things that occur all at once are:

A Cannizzaro reaction doesn't necessarily occur in this order. In fact, there is no real 'order' in which this occurs because it happens all at the same time. Instead, it may be helpful to think about electrons being momentarily shared between all of the atoms.

By adding an actual 'R' group, which is a defined group of molecules with specific attributes such as a carbon chain, to the aldehyde, we can see that both products have the original 'R' group (in this case benzene). So, we end up with a benzoic acid and benzyl alcohol.

The Cannizzaro reaction is an important reaction for producing both alcohols and carboxylic acids from a single reaction. In order for it to occur, we need a non-enolizable aldehyde, which is an aldehyde that has no alpha hydrogen atoms, and a basic environment.

In the Cannizzaro reaction, there are two steps. First, the base (OH group) is added to the carbonyl, putting a negative charge on the oxygen. Second, there are three electron movements which occur simultaneously during a hydride transfer when the hydrogen from the first aldehyde with a new OH group gets transferred to another aldehyde. This then forms an alcohol and a carboxylic acid.

What is Acetylation? - Mechanism & Definition