Mary Ellen is a science and education writer with a background in chemistry. She holds an M.S. in analytical chemistry and has worked as a high school science teacher.

The capillary action of water is the movement of water through or along the surface of any material and against the force of gravity. Explore the definition and examples of capillary action, like water climbing up a straw placed in a glass, learn about the essential contributing properties of cohesion and adhesion, and discover how to try a capillary action experiment at home. Updated: 09/22/2021
Create an account

What Is Capillary Action?

If you put a narrow straw into a glass of water, what can you observe about the level of water in the straw as compared to in the glass? You should see that the water has climbed up the straw and is higher than the level of water in the glass. It seems to have defied gravity by moving up the straw. This is capillary action - the movement of a liquid through or along the surface of another material in spite of other forces, such as gravity.

Capillary action is a property seen in some liquids. It is most pronounced in water because of water's unique properties and because water is the basis of most liquids that we use every day. When you use a paper towel to mop up a spilled drink or use a towel to dry yourself after a shower, you are using capillary action. When you put cut flowers in a vase of water, capillary action keeps them fresh. 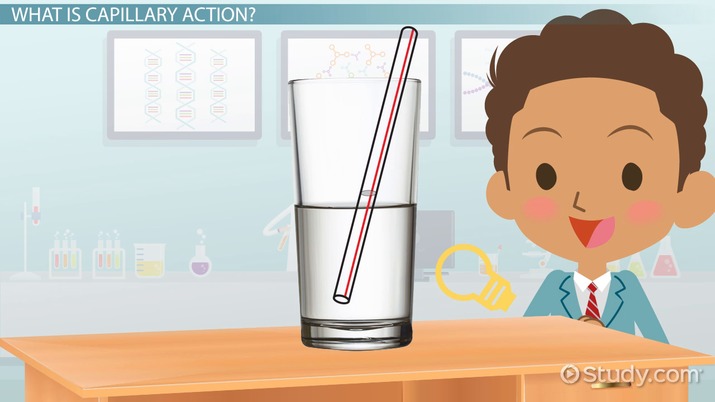 Water is good at capillary action, better than most liquids. How well a liquid can perform the feat of capillary action depends on cohesion and adhesion. Cohesion is the attraction between particles of the same type. There is strong cohesion in water. One water molecule is strongly attracted to another. Adhesion is the attraction between two different particles. The adhesion between water molecules and a plastic straw is also pretty strong.

Capillary action occurs when adhesive forces outweigh cohesive forces. Although water molecules are pretty strongly attracted to each other, they are also attracted to the plastic of the straw. The result is that water molecules will climb up the surface of the interior of the straw and the level of the water is slightly higher within the straw. There is even better adhesion between water and glass. If you had a glass straw of the same size as the plastic straw, you would see the water level rise even higher.

You may have seen this happen if you have ever donated blood. Before you can donate, the nurse will prick your finger to get a sample of your blood for testing iron levels. He or she will place a narrow glass tube, called a capillary tube, where your finger was pricked. Your blood quickly moves up the tube. It looks like the nurse has sucked your blood out with that tube, but it's really only capillary action. This demonstrates capillary action of water because your blood is largely made of water.

Another example of capillary action is in your eyes. The tear duct in the corner of each eye is a narrow tube that uses capillary action to drain excess tears into the nasal passage. And how do plants, including the tallest trees, get water from their roots all the way out to branches and leaves against the force of gravity? Capillary action.

Not all liquids are good at capillary action. If a liquid's cohesive forces are stronger than its adhesion to another surface, it's not going to happen. Mercury is a good example of this. It is very strongly attracted to itself and will not climb the sides of a glass tube, or anything else really. In fact, if you put mercury in a tube, the surface will be convex. Mercury curves in on itself.

Try This At Home!

You can see capillary action in action using just a few simple items. You need a glass or a vase, water, food coloring, and a white flower. Carnations work well and are inexpensive, but you can also use a stalk of celery with the leaves at the top.

By capillary action the water and food coloring will travel up the stem and color the petals of the flower or the leaves of the celery.

Working your way through this lesson should help you meet the following goals:

Adhesion of Water Examples |What is Adhesion in Water?

Cohesion of Water Example | What is Cohesion in Water?