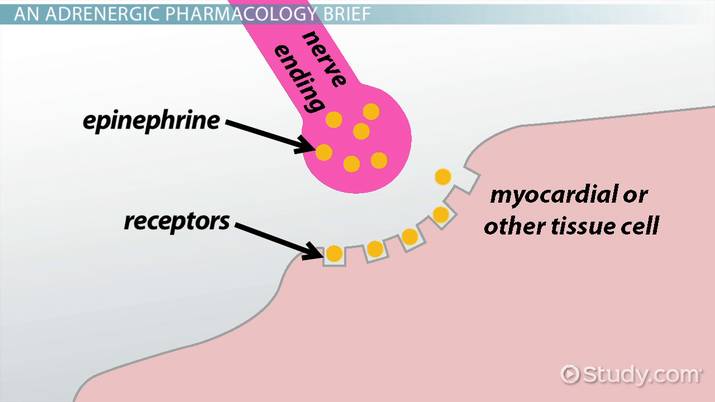 Coming up next: Metoprolol Mechanism of Action

To understand the main differences between cardioselective and non-cardioselective beta blockers, we need to make sure you know some very basic concepts pertaining to adrenergic pharmacology. The adrenergic system is the one that uses neurohormones and neurotransmitters called epinephrine (adrenaline) and norepinephrine (noradrenaline).

There are three major types of beta receptors stimulated by epinephrine: beta-1, beta-2, and beta-3. And here's where you have to wake up for this lesson's sake!

Memory aid: You've got 2 lungs and 2 types of blood vessels (arteries and veins) so beta-2 receptors are found in the smooth muscle of these 2 places. When epinephrine stimulates beta-2 receptors, the airways and the blood vessels (especially in skeletal muscle) dilate. That is to say, they open up or expand.

Now that you've got that down pat, let's move on to the blocking part of beta-blockers. Some medications can block the effects of epinephrine on beta receptors. Hence the name beta blocker, beta antagonist, or beta-adrenergic antagonist. They're synonymous terms.

Beta blockers are used to treat a wide variety of conditions, including high blood pressure and all sorts of heart problems like heart failure or arrhythmias. Some of the beta blockers are non-cardioselective beta blockers. Based on what you just learned, what do you think that means? It means they don't specifically target beta-1 receptors. Instead, they target and thus affect both beta-1 and beta-2 receptors.

Examples of non-cardioselective beta blockers include:

But since such drugs also block epinephrine's effects on beta-2 receptors, they run the risk of constricting a person's airways within the lungs, which may be risky in cases where the patient has asthma or some other lung disorder.

So, what do you do in cases where you have a patient with a lung problem and a heart condition that needs a beta blocker? Well, you give them a cardioselective beta blocker, which targets beta-1 but not beta-2 receptors. This way, you avoid the risk of constricting their airways, but you can still treat their high blood pressure or heart condition. Names of such cardioselective (beta-1) blockers include:

Beta blockers reverse these effects. Non-cardioselective beta blockers, like propranolol or nadolol, helps minimize arrhythmias, blood pressure, heart rate, and the workload on the heart. But they also constrict the airways and may be dangerous for some people with lung disorders.

Cardioselective beta blockers, like atenolol and esmolol, avoid the latter problem by targeting and affecting just the beta-1 (heart) receptors.

If you think you may have a medical emergency, call your doctor or 911 immediately. Study.com does not recommend or endorse any specific tests, physicians, products, procedures, opinions, or other information that may be mentioned on the Site. Reliance on any information provided by Study.com, Study.com employees, others appearing on the Site at the invitation of Study.com, or other visitors to the Site is solely at your own risk.

What is the Difference Between SIRS & Sepsis?