Jonah is in college, and he's not sure what he wants to do for his career. Should he be a doctor or a trapeze artist? A teacher? Banker? A real estate mogul? The possibilities are endless, and he just doesn't know what's right for him.

Choosing a career can feel overwhelming. There are so many careers available, and narrowing it down to just one can be tough. Career assessments are surveys or tests given to see how a person's personality, interests, skills, and values align with certain careers. Essentially, you take a career assessment and it will give you several options of careers that might be good for you.

Take Jonah, for example. He isn't sure what to do with his life, and he's overwhelmed by all the choices out there. But if he takes a career assessment, he can narrow the list from infinite options to four or five options. That seems a lot more doable! 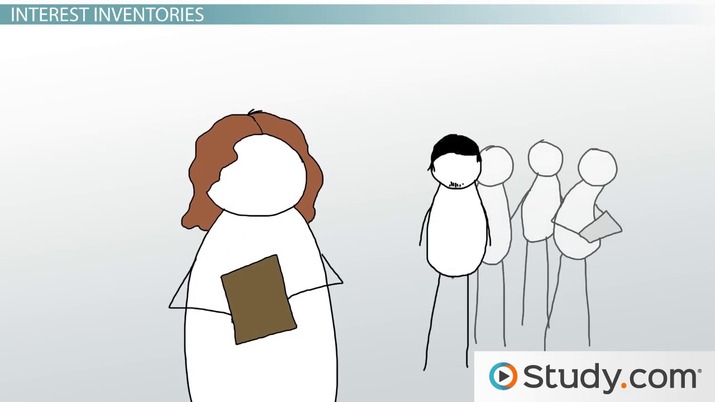 Coming up next: How Can a Personality Career Assessment Help You Choose A Career?

Everyone has a unique personality, Jonah included. Some people are outgoing and others are shy. Some like to think abstractly, while others prefer things to be more clear-cut and concrete. For example, Jonah is outgoing, and he likes solving puzzles that force him to think creatively. Despite that, he's happiest when work is highly structured; he likes having his time organized and likes to be able to predict what he's going to do from day to day.

What does this have to do with Jonah's choice of career? Personality tests focus on how to match a career to a person's personality. Think of it kind of like a dating service, except instead of a date, you'll find a career that matches your personality. For example, Jonah's people skills, puzzle-solving penchant, and craving for structure may mean that he would make a good doctor or lawyer.

The most famous types of the career assessments that look at personality are the Myers-Briggs Type Indicator test and the Minnesota Multiphasic Personality Inventory, or MMPI for short: but there are many more than just those two. Jonah can talk to a career counselor at his school or do an online search to find one that he can take.

Personality is an important part of finding the right career. After all, if Jonah likes to be around people, he probably won't enjoy a job that has him working alone at the top of a mountain for weeks on end!

But personality is only one piece of the puzzle. For example, we said that Jonah might make a good doctor, based on his personality. But what if he hates biology? What if he has absolutely no interest in how the human body works?

Interest inventories take stock of what a person is interested in and find careers that incorporate those interests. For example, Jonah hates biology, but he's really interested in what makes people tick. Instead of a medical doctor, then, Jonah might make a good psychologist. His interests in people's motivations could make psychology a good match for him.

Okay, let's say that Jonah wants to become a psychologist. Both his personality and his interests seem like a pretty good match for a career in psychology.

But what if Jonah doesn't have the skills and abilities to do that work? For example, psychologists have to think logically and use reasoning skills to analyze people and situations. Not only that, it requires a high level of verbal ability. That is, Jonah will need to be good at understanding and communicating with others. What if he's just not good at those things?

Skills assessments, also sometimes called ability tests or aptitude tests, look at what a person is good at and what jobs he or she might succeed in based on their skills. So, for example, a skills assessment might say that Jonah should consider other careers besides psychology, since his skills and abilities don't seem to line up with the skills and abilities required for a psychologist.

It's important to note that, while skills assessments might tell Jonah and people like him what they are good at, it should not be an end-all, be-all judgment on what careers that person should pursue. The reason for this is that skills and abilities are always evolving. People can learn and grow.

Take Jonah. He might not have a great verbal ability, but he can learn how to become better at that. And the more a career aligns with a person's personality, interests, and values, the more they will want to take the time to learn and develop the skills for that career. As a result, Jonah (or someone like him) could start out relatively weak in a skill but end up very strong at it.

If you've been paying attention, you probably remember I said that skills aren't as important as the personality, interests, and values of a person when it comes to picking a career. So you probably won't be surprised to learn that the fourth type of career assessment involves a person's values. Values assessments take what's important to a person and use that to find career possibilities.

What do I mean by values? Work-related values specify what is important to you about the way that you work. Do you value achievement or autonomy more? Is recognition or getting lots of support more important to you? Would you prefer to work at a job that gives you the chance to earn a lot of money or one that allows you to help other people out?

You might have noticed that work-related values overlap somewhat with personality. Take Jonah, for example: his personality is outgoing and he loves people, so it's probably not a big surprise that his work values reflect that. He would like to do work that involves helping other people out, despite the fact that he might not make much money doing that. He would also rather work on a team that offers support than to work towards individual glory. As with all of the other types of career assessments, Jonah can find values assessments through a career counselor or online.

Once you have reviewed this lesson you should be able to describe and discuss the benefits of four different types of career assessments.

How Can a Personality Career Assessment Help You Choose A Career?

How Can a Skill-Based Career Assessment Help You Choose a Career?

How Can an Interest Career Assessment Help You Choose a Career?

What is Gestalt Therapy? - Definition and Overview

Transactional Analysis Therapy and the Role of the Counselor