Industrial modernization through World War II had effects on domestic life in the forms of cars, consumerism, and new cultural norms. Learn about the post-war experience in car manufacturing, road infrastructure, and the role of automobiles in cultural status. Updated: 11/04/2021
Create an account

World War II kick-started one of the fastest periods of modernization imaginable. At the outbreak of the war, Germany invaded Poland, France, and other nations with a spearhead of motorized divisions, but much of the army was still dependent on horses and wagons, as they had been for thousands of years. After all, the superiority of American manufacturing was crucial to what Roosevelt had meant when he wanted to make America an ''Arsenal for Democracy.''

Within five years, American industry had provided hundreds of thousands of vehicles to its allies. On the home front, American agriculture took advantage of advances in farming technology, such as new tractors, that furthered the reach of mechanization. By the end of the war, it was clear that motor vehicles were not some wave of the future, but were instead here to stay. 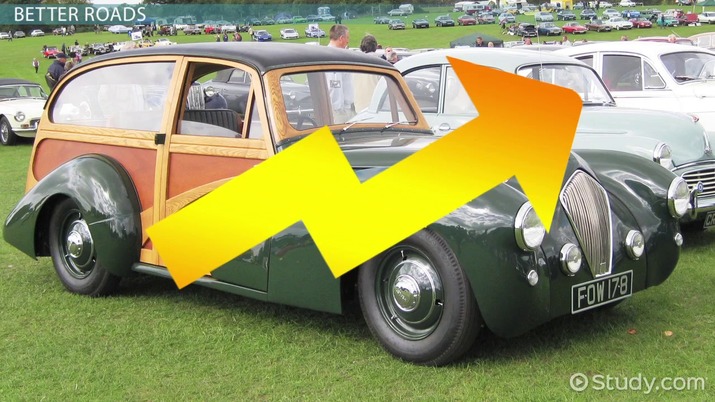 Coming up next: Culture of 1960s America

Of course, victory in war was not the only side-effect of having produced so many thousands of vehicles. It had also made many motor companies very wealthy, namely companies like Ford and General Motors that are still around today. These companies realized that the United States military would not need the massive amounts of tanks, jeeps, trucks, and other equipment once the war was over and the soldiers returned home. As a result, they retuned their factories to produce cars that civilians would want to drive.

On the whole, the 1950s were a period of great prosperity enabled by the GI Bill and the overall rise of consumerism, or willingness on the part of consumers to spend more money. Central to this economic transformation was the automobile. Boxy Model Ts and the like from before the war were dismissed as too utilitarian - cars had to have panache, after all. Industrial designers went to work, bringing the futuristic designs of a society that placed great faith in the future to ride on four white-wall tires. A new car was expected in every driveway in America, just as much as a turkey on Thanksgiving.

The war affected other aspects of the 1950s' car culture as well. Before the war, roads across the country were in a horrible state. After all, this was a society that used railroads for long-distance transportation. However, with the popularity growth of the car, all of that was poised to change. Before World War II, there were many small-scale efforts to build a national road network. The most well-known of these were the Lincoln Highway and Route 66, both of which stretched across much of the country.

However, in 1956, the Federal Aid Highway Act of 1956 was passed, authorizing the construction of the Interstate Highway system. Modeled on the German Autobahn, these routes were viewed as central to defense, as they permitted quick movement of forces across the country. Also, their impact on commerce has been massive, as evidenced by the sheer amount of traffic that these roads carry today.

The Car in Culture

Still, for many in the 1950s, the purpose of a car was not to keep industry alive or to encourage government spending for a highway system. Instead, it was a crucial part of the American dream. Our popular memory of the 1950s revolve around the independence that cars gave a generation of Americans who lived in very real fear that their independence would be taken away by foreign powers.

The appeal of cars to the young was especially true - the 1950s saw the birth of drive-in theatres, drive-thru restaurants, and carhops bringing milkshakes to the window. Of course, this was still a minority of Americans who enjoyed all of these aspects of the car, but it found a place in the collective memory of the country.

The idea of a muscle car, a car that was overpowered to achieve great acceleration and speed, also had its roots in the 1950s. Granted, racing cars has been around since the first automobiles, and certainly got a major boost during the 1920s' Prohibition era, but it was only in the 1950s when automobile makers really started to target gear heads, with cars that were capable of ever-increasing amounts of horsepower.

The end of the Second World War caused an explosion in the importance of cars to American life. Car manufacturers were eager to continue selling the amounts of vehicles that they had produced during the war and found many interested customers among the newly wealthy middle class. These cars were taken down new highways, but also to venues like drive-in movie theaters and restaurants that were increasingly driven themselves by this new car culture. However, not all cars were simply four wheels, as an increasing amount of energy was spent on producing new muscle cars capable of better and better performance.

Finishing this lesson means you are prepared to:

Which of these was NOT a major manufacturer of 1950s era cars in America?

Cars & Culture in the U.S. in the 1950s
Related Study Materials

Old and New Immigrants in the US: Definition & Overview

A Modell of Christian Charity by John Winthrop: Summary & Analysis

The Industrial Revolution: Impacts on the Environment