Ions are elements which have a charge, the positively charged form of which is known as a cation. Understand the definition and explore how cations are formed and behave through examples of both metal and non-metal elements. Updated: 09/23/2021
Create an account

What Is a Cation?

When a single element or group of elements has a charge, it is known as an ion. When an ion is positively charged, it's called a cation.

When an element or compound is in cation form, it can be represented by either the element symbol or by a compound formula, with the amount of charge written as a superscript immediately after the symbol or formula, as seen in the following table:

An easy way to remember that cations are positive ions is by replacing the 't' in 'cation' with a positive sign, +. Instead of writing cation, you would write ca+ion. The positive sign bears enough likeness to a 't' to be read as cation, yet it reminds you of the definition! 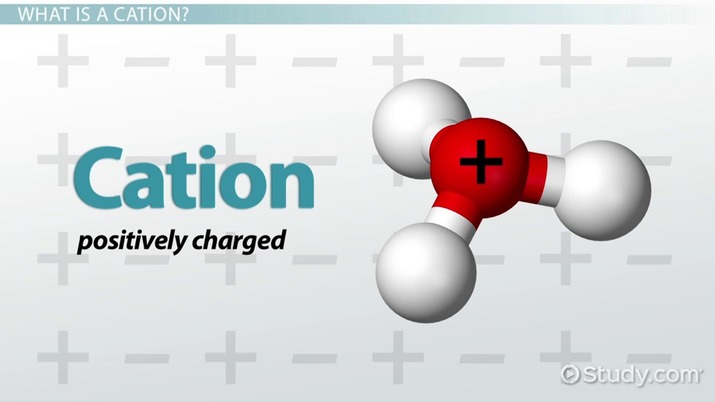 How a Cation Forms

Cations form when an element or group of elements (compounds) lose one or more electrons. For many people, this idea is somewhat counterintuitive because we do not equate losing things with being positive. But electrons are actually negatively charged particles. So, when an element loses an electron, it becomes less negative and more positive.

The sodium atom loses one electron to become a +1 cation. The process is shown in the following diagram:

In figure one, the sodium atom has 11 electrons. When sodium loses one electron, it becomes a +1 cation as shown in figure two. The +1 sodium cation now has 10 electrons, so it is smaller in size than when it had 11 electrons.

Nonmetal elements, like nitrogen, oxygen, and hydrogen, are capable of forming cations as well. Hydrogen occurs quite frequently as a +1 cation, while nitrogen and oxygen can form cations when they are in compound form. The ammonium ion is a type of cation formed when nitrogen is bonded to four hydrogens. Examples of nonmetal cations are shown in the following table:

Cations can be found everywhere - inside of living things, in rocks and minerals, and even in our food! Living things depend on cations for survival. Proper functioning of our nervous system depends on the movement of potassium and sodium cations through our nerve cells. Our body requires magnesium cations for metabolizing food, our bones need calcium cations in order to be strong and, of course, our blood cells use iron cations to transport oxygen.

Ionic compounds are abundant in our world. The table salt you might use is an ionic compound and is officially called sodium chloride. In this compound, a sodium cation is bonded to a chlorine anion.

In the winter, property owners may sprinkle the sidewalk with magnesium sulfate to prevent ice from forming and creating a hazard. In this compound, a magnesium cation is bonded to a sulfate anion. Mineral-based sunscreen often contains titanium oxide, which is a white, UV-ray-blocking ionic compound that contains a titanium +4 cation bonded to oxygen anions.

Let's review. Cations are positively charged particles that form when an atom or compound loses one or more electrons. Metal atoms can lose electrons to form cations, as well as some nonmetals. Cations may exist by themselves when they are in watery solutions, or they can be found bonded to an anion, a negatively charged ion, in ionic compounds. Cations play important physiological roles in the lives of living things.

By thoroughly studying this lesson on cations, you'll improve upon your ability to:

What is an Anion? | Anion Examples & Properties

Binary Acid List & Examples | What Is a Binary Acid?

Cells With a Nucleus & Membrane-Bound Organelles