The American Revolution is one of the most significant wars to be fought in modern times. Explore the events leading up to the revolution, the turning points within the war, and the signing of the Declaration of Independence in 1776. Updated: 09/27/2021
Create an account

Causes of the American Revolution

With rare exceptions, like meteor strikes or volcano eruptions, most important historical developments occur in reaction to trends, ideas or actions. They may be instantaneous reactions to an invasion or government measures taken to counteract longer trends, like immigration or birth rates.

The American Revolution is one of the more important events of the past few hundred years for understanding modern history. It was also one of the seminal moments of the Enlightenment, where for the first time portions of Enlightenment political philosophy were used to help create an entirely new country. In this lesson, we're going to look at the immediate events that led to the open rebellion by the American colonies up to the Declaration of Independence on July 4, 1776. 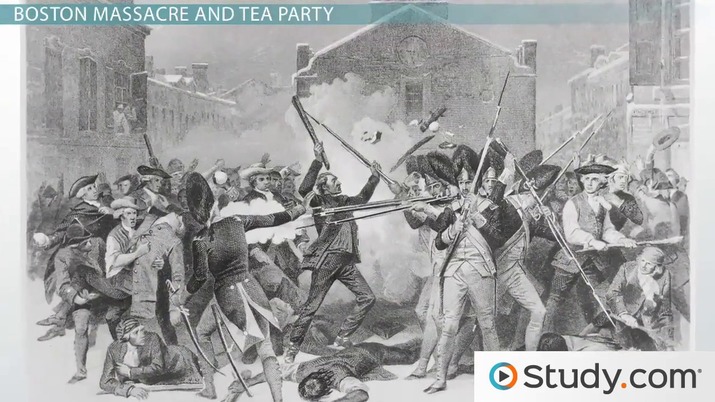 Try it now
Back
Coming up next: Effects of the American Revolution: Summary & History

The initial issues, which caused many of the grievances of the American colonists against their British governors, can be traced back to an Anglo-French conflict in the mid-18th century. The North American theater of the Seven Years' War is known to most Americans as the French and Indian War. The French and Indian War began in 1754 when a young, British officer, named George Washington, marched an English force to Fort Duquesne in the Pennsylvania hinterlands to oust the French from British land. The war began when Washington encountered a French scouting party and took several days of heavy fire behind the makeshift Fort Necessity before being forced to retreat.

Fighting continued for nine years, ending in British victory. The war's outcome changed the nature of the relations between the colonies and the British government. France surrendered huge swathes of its North American territory to the British, including most of Canada and most of the land south of the Great Lakes and east of the Mississippi River. With the French presence on the frontier pretty much gone, this effectively ended the colonies' need for large-scale British protection.

Additionally, soon after the 1763 Treaty of Paris that ended the war, the British issued the Proclamation of 1763. This outlawed European migration west of the Appalachian Mountains. Though this measure was meant to appease the Native Americans that had helped the British win the war, it served to anger many colonists who felt that the British had little right to tell them when and where they could settle.

Finally, and most importantly, the British government decided that the heavy price of the war should be paid by those British subjects who benefited most readily from the war: the American colonists. As a result, Parliament, under the direction of William Pitt, began implementing a series of taxes aimed at recouping Parliament's enormous wartime expenditures. The 1764 Sugar Act placed new duties on sugar, molasses, textiles, coffee and other American goods shipped back to the British Isles. This angered the colonists, who felt they could not be taxed like other British residents since they didn't have representatives in the British parliament. You've probably heard the famous motto, 'No taxation without representation,' which was born from this sentiment.

Matters got worse in 1765 when the Parliament passed the Stamp Act, which required colonists to buy stamps to produce or purchase virtually all paper products made in the colonies, from newspapers to marriage licenses. Opposition to the Stamp Act in the colonies at times took on violent dimensions. Colonists destroyed royal offices and intimidated the stamp tax collectors, to the point that all resigned their posts before the act even took official effect in November.

The colonists were further rankled by the passing of the Quartering Act, which required them to house and feed the increased presence of British soldiers. Though the Stamp Act was eventually repealed in 1766, Britain reaffirmed their control over the colonies. They passed the symbolic Declaratory Act, which claimed Parliament had authority to pass any laws it pleased concerning the American colonies. Only one year later, Parliament passed the Townshend Acts, taxing more American imports, still attempting to recoup the money spent on the French and Indian War.

These new taxes hit the city of Boston hard since much of its economy depended on shipping between Britain and the colonies. It was in this volatile climate in 1770 that a Boston man began harassing several British soldiers, who responded by striking the man in the face. A mob of Bostonians quickly grew around the soldiers, who retreated to a nearby barracks.

Tensions continued to rise as the crowd grew, challenging the soldiers to fire. When one finally did after being struck with a club by a member of the mob, a chaotic scene broke out where British soldiers fired into the mob out of fear of their own safety. When the mob finally dispersed, several Bostonians had been killed. Though all the soldiers were eventually acquitted of any wrongdoing (defended by none other than America's second president, John Adams), Parliament repealed all the Townshend Act taxes except tea.

Three years later, Parliament again interfered in American trade by giving the British East India Company a monopoly on the tea trade in North America. The colonists responded by boarding the British vessel Dartmouth dressed as Native Americans and dumping all the British tea into Boston harbor. By this point, Parliament had had enough of American insolence and enacted several measures meant to punish the colonies, including the Coercive Act, the Quebec Act and a new Quartering Act. These all attempted to bring the colonies under more British control.

With the colonies losing their ability to self-govern, many colonial leaders felt something needed to be done. In response, they called the First Continental Congress, which met in Philadelphia in September of 1774. The delegates from 12 colonies (Georgia abstained from sending a delegate) signed documents stating that Parliament had no right to meddle in the internal affairs of the colonies, and the colonies would boycott British goods. They agreed to meet again the following year.

However, like many examples of dissent, it wouldn't go so smoothly. Before the Second Continental Congress could meet, fighting between local militia, and a troop of British regulars broke out at Lexington Green and Concord in Massachusetts in April of 1775. Only days later, the Massachusetts Provincial Congress declared open rebellion and called for volunteers to fight the British. Four days later, more than 13,000 colonists answered the call and began a yearlong siege of British-held Boston.

It was under these circumstances that the Second Continental Congress met the following month in May. As a result of the impending rebellion, the Congress acted more like an independent government than a body of colonial delegates. They appointed a provisional president in John Hancock, began printing paper money and made plans for the defense of the colonies.

Early fighting had mixed results for the American colonies. Only a month after the Second Continental Congress met, the Americans were forced to retreat at the Battle of Bunker Hill, though they did so after inflicting over a thousand casualties on the British regulars. In March of 1776, the Americans captured Dorchester Heights above Boston. They turned artillery captured from Fort Ticonderoga on Boston itself, forcing the British to evacuate the city.

Though this was a fantastic and unlikely success, trouble appeared over the horizon in June when an enormous British war fleet appeared in New York Harbor, carrying 30,000 British soldiers and 1,200 cannons.

With Boston under rebel control and a foreboding force anchored near New York City, the Continental Congress first heard a resolution in June to draft a declaration of independence from Britain, though they put it off until July. In the intervening month, Thomas Jefferson drafted the Declaration of Independence, and it was edited by John Adams and Benjamin Franklin.

The initial grievances of the American Revolution were the taxation and imposition of housing British soldiers on the American colonies by the British Parliament. These measures were taken largely in order to recoup the tremendous price the British Parliament had paid in fighting the French and Indian War. However, the colonists objected to the taxation, as they had no members of parliament to represent their interests. Tensions were exacerbated by the increasingly acidic and violent atmosphere in the colonies, highlighted by attacks on tax collectors and the 1770 Boston Massacre.

After fighting broke out in 1775, the delegates at the Continental Congress decided that independence from Britain was the only natural option. Despite some initial successes at Boston, the huge British fleet readying to land at New York City proved the British were not willing to let their American colonies declare independence quietly.

You could do the following after watching the video lesson:

Warsaw Pact: Blocs, Countries & Overview | What was the Communist Bloc?

Political Thinkers of the Enlightenment

Development of American Law After the American Revolution

Warsaw Pact: Blocs, Countries & Overview | What was the Communist Bloc?

Political Thinkers of the Enlightenment

Development of American Law After the American Revolution