In 1956, Egyptian President Gamal Nasser seized the Suez Canal from its French and British owners, sparking an invasion by those Western nations and their ally, Israel. The Suez Crisis became a Cold War confrontation and a test of the United Nations.
Create an account

It's often tempting to over analyze events in world history, to look back and impose motives and causes and factors that might not have really been that important to everyday people at the time. But the 1956 Suez Crisis - on the surface a mere power-grab of important real estate - really was complicated. It was the convergence of three conflicts: old empires vs. their colonies, a very young Israel vs. its Arab neighbors, and the Cold War showdown of the United States vs. the Soviet Union. All for 120 miles of waterfront property.

The Suez Canal opened in 1869, connecting the Mediterranean and Red Seas. At first, it was a private corporation owned by French investors and the Egyptian government. But Egypt sold its shares to Britain in 1875, and although the Suez Canal was primarily a commercial venture, Britain secured permission from Egypt to maintain a military presence in the Canal Zone to reinforce its status as the world's supreme naval power.

But in the 1950s, Egypt's monarchy was overthrown. Gamal Nasser soon seized power and the title of president. Nasser advocated for pan-Arab nationalism and took steps to strengthen his own nation's position in the world, accepting aid from any side if it would benefit these goals, regardless of who it might anger: 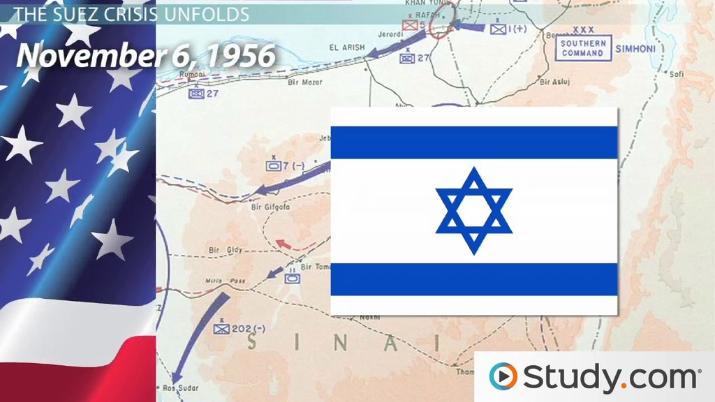 This complicated and tense situation unraveled in 1956. The United States, wanting to stifle Soviet influence while increasing American influence in the region, had agreed to loan money to Egypt for construction of the Aswan Dam on the Nile River. But within six months, the U.S. backed out of the deal, prompting Britain and the World Bank to withdraw their loans as well.

Egypt's president was furious. Seeing an opportunity to assert his independence from the colonial empires, Nasser announced that Egypt was taking over the Suez Canal and would use its income to finance construction of his dam. The Soviets backed him up; the Egyptian people were jubilant. It was July 1956.

British Prime Minister Sir Anthony Eden quickly organized an international conference to find a diplomatic solution to the problem. They offered Egypt a seat on the board of the Suez Canal Company, among other concessions. Nasser refused. The United States made its own proposal to the United Nations, creating a new international consortium to operate the canal. The Soviet Union vetoed it.

European nations recalled how appeasement had led directly to World War II and didn't want to make that same mistake again. Britain was ready to deal with Nasser by force, but the United States would not condone unjustified military action. So Britain, France and Israel secretly agreed on a plan. Israel would attack, and as soon as the battle was within ten miles of the water, Britain and France would 'intervene' and seize the canal to protect it from the fighting. They also hoped to depose Nasser, while Israel wanted rights of passage through the waterways.

Israel attacked first on October 29, 1956. A few days later, Britain and France entered the fray. By the morning of November 6 (the same day as the U.S. presidential election in which Eisenhower was re-elected), British and French troops had successfully invaded the Canal Zone. Soviet leader Nikita Khrushchev threatened nuclear strikes on Europe if the hostilities did not end immediately. Canada's Prime Minister Lester Pearson desperately tried to intervene, to no avail.

The United States was in a delicate position. Britain was a strong ally, but Eisenhower had distanced himself from European colonial conflicts throughout his re-election campaign. Yet, he was clearly concerned about the Soviet Union; just a few days before the Suez Crisis, the U.S. had condemned Soviet intervention in a Hungarian revolt. Eisenhower had no desire to see Soviet influence spread into the Middle East. The U.S. scolded the Soviets for their reckless threats, and then threatened Britain, France and Israel with economic sanctions. The United States also officially condemned the military action in the U.N.

Although British military advisors assured Prime Minister Eden that they would control the entire length of the canal within 24 hours, he backed down. His economy was slipping and America wouldn't help, and public support even within Britain was deeply divided. Eden called a ceasefire the night of November 6. British and French forces withdrew in December, and Israel fell back in March. In the meantime, the first United Nations Emergency Force (UNEF) was authorized and deployed to the region.

Effects of the 1956 Suez Crisis

Let's review. In the summer of 1956, three major world conflicts converged in the Middle East. Egyptian President Nasser asserted his nation's power in the world by nationalizing the Suez Canal. This angered France and Great Britain who had previously controlled the shipping lanes and who already distrusted Nasser for some other actions he'd recently taken. Israel was also concerned about increasing Egyptian strength.

When diplomacy failed, Israel attacked in October 1956, in collusion with France and Britain. The Soviet Union took Egypt's side. The United States, in spite of its heated rivalry with the U.S.S.R. during the Cold War, would not fully support its western allies. They withdrew and lost their international prestige, while Egypt and its ally the U.S.S.R. strengthened their standing in the world.

When you finish the video, you should be able to:

Understanding the Yom Kippur War of 1973

Fall of the Soviet Union and End of the Cold War: Causes & Timeline

The Korean War: Causes, Effects and The United Nations

The Creation of Israel in 1948: Timeline & Resulting Conflicts

Gorbachev's Policies of Glasnost and Perestroika: Explanation and Significance