Pathogens that invade the human body can cause cellular injury that often results in damaged cells and organs. Learn about infectious causes and their processes, including exotoxins versus endotoxins, parasitic nutritional loss, inflammation, viruses, and cancer. Updated: 09/27/2021
Create an account

Sometimes an injury is not what it seems. I knew of someone who once got hit by a car at a fair speed and got up and walked off as if nothing happened. On the outside, this individual looked fine at first, but on the inside, he was suffering from severe internal damage that was thankfully caught early enough by doctors to save his life.

In an analogous fashion, infectious agents that target our body don't always cause injuries or problems in very obvious ways. So, while you may have an obvious fever and stuffy nose, there may be more than meets the eye going on inside of you.

This lesson will go into some of the ways pathogens cause injuries to our body's cells. 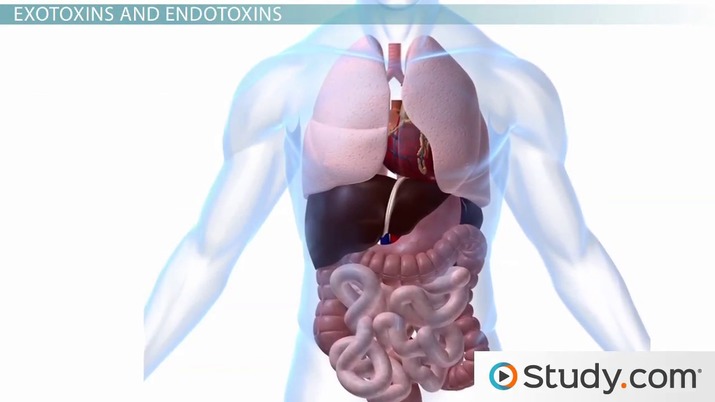 Coming up next: Other Causes of Cellular Injury

One of the most obvious ways by which something like a bacterium may cause injury to a person is through the release of exotoxins. These are toxins that are secreted out of a bacterium. These toxins may directly damage cells by ripping holes into them or by disrupting internal chemical processes that the cells need to survive.

Exotoxins shouldn't be confused with endotoxins, sometimes called lipopolysaccharides, which are bacterial toxins that are part of the bacterial cell wall. These toxins are released only when the bacterium dies and therefore the cell wall breaks apart, releasing the endotoxins into the surrounding environment.

This is why in severe cases of bacterial infections doctors will have to very carefully give antibiotics to a patient. If too many of these endotoxins are released as a result of the massive and simultaneous death of bacteria due to antibiotic administration, the patient may actually die.

We can compare this to the following illustration. Let's say that the antibiotic is some kind of force that destroys the bacteria. Once the bacteria die, they release the endotoxins that were part of their cell wall. This toxin release causes our inflammatory response, the one responsible for fighting off deadly toxins and pathogens, to go into overdrive. It's this overreaction by the inflammatory response that causes our body so much damage.

You can liken this to our bacteria being an orange and the endotoxin being the juice in the skin of the orange that's released when the skin is broken apart by the force of your hands, the antibiotics. If you've ever peeled an orange, you most probably got acid squirted into your eye that stung you. Now imagine that the amount of acid in the orange peel increased ten or a hundred fold. You'd get so much acid into your eyes that it would really hurt because of all the inflammation that's causing your eyes to turn red. That's kind of how the organs in your body are hurt as a result of endotoxins as well.

Now, inflammation has another catch. Chronic, or long-term, inflammation may cause a lot more problems. To see how, let's move away from bacteria for a second.

Viruses are another type of pathogen that can invade your body. You're surely familiar with some viruses, like the flu virus or the herpes virus. Some viruses are kind of a problem for your body. There are two ways in which viruses can trouble your body's cells.

You see, some of them like to enter your body's cells, like in the liver, and hide in there. Your immune system doesn't like the fact that the viruses are using the cells as a home and begins to secrete inflammatory molecules to try and destroy the cells harboring the virus so the virus can die as well.

The problem is that this kind of long-term inflammation has been linked to the formation of cancer. That's because inflammation causes the release of free radicals that damage everything and anything in their path, including a cell's DNA. If the DNA is damaged enough, it may transform a cell into a cancer cell that will multiply out of control and spread all over the body.

However, in some cases, viruses are much more direct, meaning they don't cause cancer indirectly through the process of inflammation. Instead, some viruses actually directly insert their genome into a host cell's genome and mess around with the host cell's DNA. This transformed DNA, as before, causes the cell to grow out of control, resulting in cancer.

Since we've already talked about bacteria and viruses, let's focus on parasites for our last section. Parasites, such as the hookworm, can cause some damage to the body directly and indirectly. For example, hookworms attach to the intestinal wall of a human and suck on the person's blood as a food source. The hookworm's teeth literally sink into your flesh and therefore physically destroy some of the cells lining your intestinal tract as a result. This is further compounded by the fact that over time, the person may develop iron deficiency anemia and lose quite a bit of protein as well. This loss of nutrients and increasing number of worms in severe cases may seriously damage other organs and tissues in the body as well.

Let's hope you are never infected by worms and don't end up on a TV show that showcases the monsters living inside you.

Besides parasites that suck your blood and viruses that can cause you cancer, other ways by which pathogens can cause damage are highlighted by bacteria.

Bacteria can release exotoxins. These are toxins that are secreted out of a bacterium. These toxins may directly damage cells by ripping holes into them or by disrupting internal chemical processes that the cells need to survive.

Exotoxins shouldn't be confused with endotoxins, sometimes called lipopolysaccharides, which are bacterial toxins that are part of the bacterial cell wall.

Types of Physical Injury to Cells

Hydropic Degeneration Causes & Significance | What Causes a Cell to Swell?

Cellular Respiration in Bacteria Process | How do Bacteria Get Energy?

Sperm Cell Function & Structure | What is a Sperm?