The Reserve Bank of India

India's central bank is known as the Reserve Bank of India (RBI). Its role is to foster financial stability and regulate India's currency and credit.

Founded in 1935, the bank sets monetary policy for the country. It is fully owned by the government of India and is run by a government-appointed board of directors. 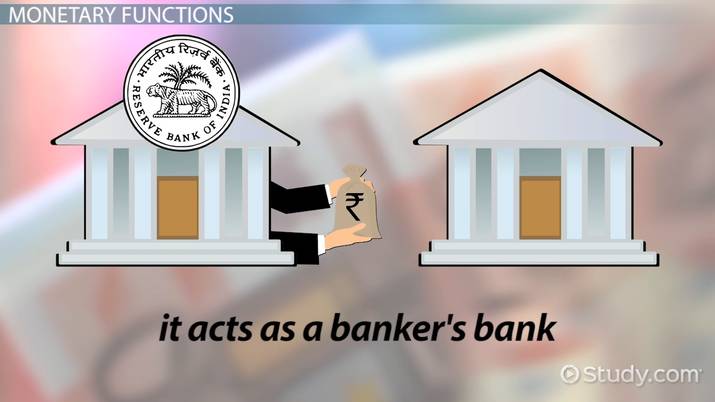 Coming up next: What is Global Trade? - Definition, Advantages & Barriers

The core function of the RBI is to set the lending rate between banks. However, as the overseer of India's monetary policy, the bank performs several other functions that are important to the Indian economy.

Although the government is the technical issuer of currency, the RBI actually distributes the notes and coins into the marketplace. It also takes in and destroys currency; in other words, as bills and coins wear out, the RBI ensures that fresh and clean currency is in the marketplace.

A Bank to Banks

Not only does the RBI set the lending rate between banks, it acts as a banker's bank. When banks need money, the RBI can lend money to them since it holds some of their reserves.

In addition to supporting other banks, the RBI has the power to inspect and audit other banks.

As the central bank, the RBI is the bank of the government. Just like the private banks, RBI can lend money to the government itself; this includes the federal government as well as state governments.

The RBI also insures deposits made in other banks, up to 100,000 rupees (Rs. 1.00 lakh), including commercial banks. This helps to encourage savings in India, since investors know that their savings are protected against catastrophe.

The RBI controls money as well as bank credit. By controlling credit, it works to stabilize prices and rates for credit exchange.

Although the rupee is a floating currency, the RBI does have the power to adjust the rates if deemed necessary. It also manages the foreign exchange market.

As administrator of the entire banking system of India, the RBI performs other functions that are not related to money or money management.

Banks in India need licenses to open, to open branches or close existing branches. The RBI holds the key to the licenses for these banks. This prevents unfettered growth or unmanageable competition among banks in different areas.

Earlier, we mentioned that RBI can inspect other banks. Since it is the banker's bank, the RBI performs inspections of banks across India: investigators look at the books, assets and liabilities to ensure banks are both in good health and acting above-board.

The RBI also carries out reviews of commercial banks and other financial institutions. As India's central bank, the RBI shoulders the burden of the monetary policy of the entire nation.

When you think of a central bank, the last thing you would expect is the role of a promoter. As part of its role as the central bank, it also promotes savings and banking across the nation.

As part of its other functions, it works to promote foreign trade and exports. The RBI even has a hand in agricultural financing and credit, as well as in small business and smaller industries.

The Reserve Bank of India (RBI) is the central bank of India. It supports and directs monetary policy, issues and manages currency, acts as a bank to banks and the government, controls credit and manages the foreign exchange market (as well as tweaking rates from time to time). The RBI also performs non-financial activities (including licensing, auditing, promotion, etc.).

Prompts About the Central Bank of India:

In approximately two paragraphs, write an essay that briefly explains the history of the Reserve Bank of India (RBI) and what its role is. Your essay must also describe how its duties are important to the economy of India.

Example: The Reserve Bank of India was set up in 1935, when India was still a British colony.

Write an essay of about two paragraphs that describes the relationship between the Reserve Bank of India and the government. Your essay should also discuss the RBI's role in regulating the foreign exchange market.

Example: The Reserve Bank of India serves as a kind of financial advisor to the Indian government.

Make a chart, poster, or some other type of graphic organizer that lists and describes the non-monetary functions of the Reserve Bank of India.

Example: The RBI routinely inspects banks throughout India to make sure they are operating soundly.

Consider all the functions of the Reserve Bank of India. If you could work for the RBI, which of its duties would you most like to be in charge of? Write a reflection essay of at least two to three paragraphs that explains your choice.

Example: You really see the importance of price stability, so you would like to work in the credit control sector of the RBI.

The Life and Death of Cholmondeley Analysis

Cardinal Richelieu and his Influence on the World

Using the File and Home Menus in PowerPoint