Italian criminologist and economist, Cesare Beccaria, is given much credit for the structure of the criminal justice system in the United States. Learn how the system of courts and prisons used to enforce the law in the U.S. was influenced by Beccaria's 1764 book, On Crimes and Punishments, and his philosophies on social contract and utilitarianism, and his thoughts on deterrence. Updated: 10/09/2021
Create an account

On Crimes and Punishments

Beccaria may not be a household name, but you know his work. He's largely responsible for the development of today's United States criminal justice system. The system would look very different without his influence.

Cesare Beccaria was an Italian philosopher and thinker who lived during the 18th century. He belonged to an intellectual circle known as The Academy of Fists. This circle focused on reforming the criminal justice system. To further that end, Beccaria wrote On Crimes and Punishments in 1764. Beccaria recognized how few studies had been conducted regarding reform.

He believed all people possess the basic qualities of free will, ability for rational thought, power to have self-interested thoughts, and manipulability. In a nutshell, Beccaria believed people commit crimes because they freely make choices in their own self-interest. These choices sometimes conflict with the interests of society. Because many of the criminal choices can be anticipated, society should take measures to manipulate and discourage those choices. Society could discourage the choices by setting criminal punishments severe enough to keep people from choosing to commit crimes.

Let's look more closely at some of the major points made through On Crimes and Punishments. 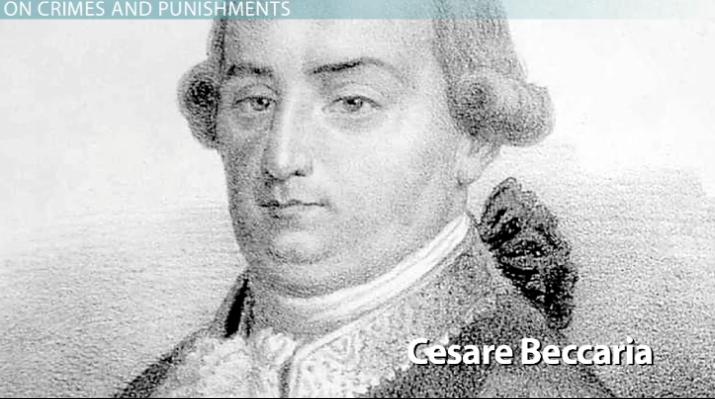 The second is utilitarianism. Utilitarianism piggybacks on the social contract theory and refers to the belief that the government should only legislate in ways that provide the greatest public good. This is an important philosophical theory that was more fully developed through the later works of Jeremy Bentham. Using utilitarianism, Beccaria claimed that criminal punishment should be practical and useful to the people. Punishment should increase the overall amount of happiness in the world and create a better society.

Instead, Beccaria promoted deterrence. Deterrence is a type of prevention meaning that the threat of punishment outweighs the urge to commit a crime. Deterrence prevents the criminal from repeating criminal behavior and also dissuades others from choosing to commit crimes. Beccaria felt that deterrence provided the most use for society.

However, in order to provide the most deterrent effect, he felt punishment must:

He opposed the death penalty in most cases based on this same argument. Beccaria felt capital punishment was needlessly severe. He wrote that long-term imprisonment and perpetual slavery, or banishment, were more effective deterrents.

Beccaria argued against retribution, which is a criminal punishment theory that maintains punishment is payment for harm done. Instead, he promoted deterrence. This is a type of prevention where the threat of punishment outweighs the urge to commit a crime. In order to provide the most deterrent effect, he felt punishment must:

Deterrence in Criminology Theory & Types | What Is Deterrence?