Cesare Lombroso was a famous criminologist who invented the theory of positive criminology. Study the biography of Lombroso and his criminology theories. Updated: 10/13/2021
Create an account

Criminology is the study of criminals, crimes, theories of deviant behavior, how society reacts to crime, and anti-crime policies. Criminologists are individuals who study criminology.

One famous criminologist was Cesare Lombroso. He was born in 1835 in Verona, Italy and studied medicine at several universities. His main focus was psychology and psychiatry. Eventually, he developed an interest in the physiology and anatomy of the brain. Lombroso served briefly as a military medical doctor and later became an Italian professor of criminology. 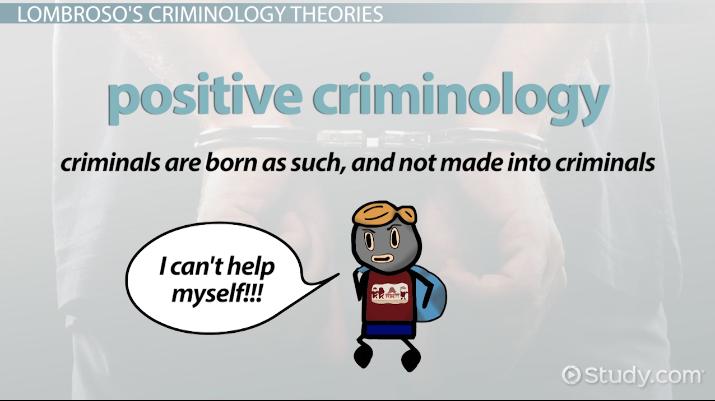 Lombroso studied what is known as characterology, which is the relationship between mental and physical characteristics, or the link between the way a person behaves and looks. Building on his characterology studies, Lombroso became a famous positive criminologist. The primary idea behind positive criminology is that criminals are born as such and not made into criminals; in other words, it is the nature of the person, not nurture, that results in criminal propensities. The positive criminologist does not usually examine the role of free will in criminal activity.

Criminaloids, on the other hand, had no physical characteristics of a born criminal but morphed into criminals during their lives due to environmental factors. Criminaloids supposedly committed less severe crimes than other types of criminals.

Despite his findings, Lombroso's positivist criminology theories were later shown to be inconsistent or non-existent. Another criminologist, Charles Goring, carried out similar studies on human physiological characteristics and determined that there were no major statistical differences between the features of criminals and the rest of the population. This, in addition to changes in science and politics, led to a decline in Lombroso's theories, especially throughout Europe. New theories that focused on environmental factors as the cause of criminal activity gained acceptance. Nevertheless, Lombroso is still considered to be the father of positive criminology.

Lombroso is famous among criminologists. His positivist criminology theory explained that some criminals were born that way and their criminal activities are a result of nature, while others became criminals due to their experiences in life. Born criminals had similar facial features, such as large canine teeth, large jaws, and low-sloping foreheads. Criminaloids had no such physical characteristics but morphed into criminals during their lives due to environmental factors.

Cesare Lombroso is considered to be the father of positive criminology. He studied characterology, which is the relationship between mental and physical characteristics. Although Lombroso's theories were later shown to be inconsistent or non-existent, he is still regarded as a contributor to the study of criminology.

Upon viewing this lesson about Cesare Lombroso, you should be able to:

What is Recidivism? | Causes, Rate & Examples of Criminal Recidivism & How to Reduce Recidivism