So, how do these look? Well, you know what the square root symbol looks like. The third root and the fourth root also use the same symbol except that now you will see a little number to the upper left of the symbol like this.

Do you see the little number right where the symbol makes a dip? That number tells you how many times to multiply your answer to get the number inside the radical. If you don't see a number, then you are looking at a square root that has an invisible little two there. 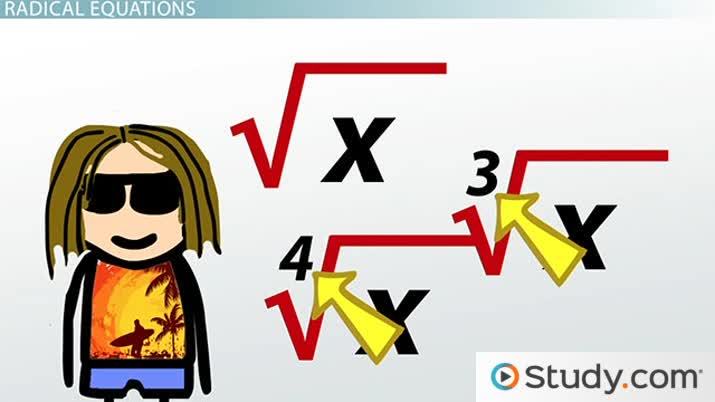 Coming up next: Squaring Both Sides of an Equation Twice

How to Remove Radicals

How would you solve something like this? What do you think? We would want to remove the radical somehow so that we could get the x so we can solve for it. So how do we do that? Let me show you.

For a square root, we square it; for a third root, we cube it; for a fourth root, we take it to the fourth power, and so on and so forth. We also remember that if we do one operation on one side of the equation, we have to do it to the other side as well.

Also, if you have an equation such as sqrt(x + 2) - 1 = 0, you would want to move the -1 over to the other side of the equation first so that your radical is by itself before you unlock the radical. Let's take a look at a couple of examples.

Change to a Linear Equation

First, if inside our radical, we have an x, we will end up with a linear equation after removing the radical. Let's solve this equation.

We see that our radical is not by itself. We need to move the 4 over to the other side first. We go ahead and subtract 4 from both sides. Now we can use the little number to help us unlock our radical. We see a little 3, so we need to take both sides of our equation to the third power. This is what we get.

Now we have a linear equation, which we know very well how to solve. We see that we have one final step left which is to move the 5 over to the other side. Doing this, we get an answer of -69.

Change to a Quadratic Equation

We see our radical by itself on its side of the equation, so we can go ahead and unlock it. We look for our password. We don't see a number, so that means our password is 2. A 2 means we will square both sides of our equation to remove the radical.

Now, let's recap. We learned that the radical symbol is the symbol that is part of the square root. But we can also have third roots, fourth roots, etc. These are all radicals where the type is determined by the little number located where the symbol makes a dip.

Before we can solve our equation, we need to remove the radical. We do this by looking to the little number. To remove the radical, we first make sure it is by itself on its side of the equation. Then we take both sides of our equation to the power of the little number. We then finish solving by using what we know of linear and quadratic equations.

By the end of this lesson, you should be able to identify a radical and remove it to create a linear or quadratic equation.