Benvolio is Romeo's cousin in Shakespeare's play 'Romeo and Juliet'. Learn more about Benvolio's traits, character analysis and profile, including that of peacemaker, trustworthy friend, counselor, problem solver, and voice of reason. Updated: 08/28/2021
Create an account

We first see Romeo's cousin Benvolio in Act One, Scene One of Romeo and Juliet, when the servants of the Capulet household pick a fight with the servants of the Montague household as part of their ongoing feud. The Prince of Verona has grown weary of the constant fighting between the two families, and their skirmishes often disrupt the peace.

As the fighting breaks out, Benvolio tries to stop it by saying, 'Part, fools! Put up your swords; you know not what you do,' (1.1) warning them to quit before things accelerate to a serious level. In that statement, he also alludes to some of Christ's last words on the cross, 'Father forgive them; for they know not what they do' (Luke 23:34a). Just as Jesus is known as a peacemaker, so Benvolio takes on a peacemaker's role in this opening scene of the play. Benvolio then pleads with Tybalt, Juliet's hot-tempered cousin, to use his sword to stop the fray. Tybalt, of course, refuses. 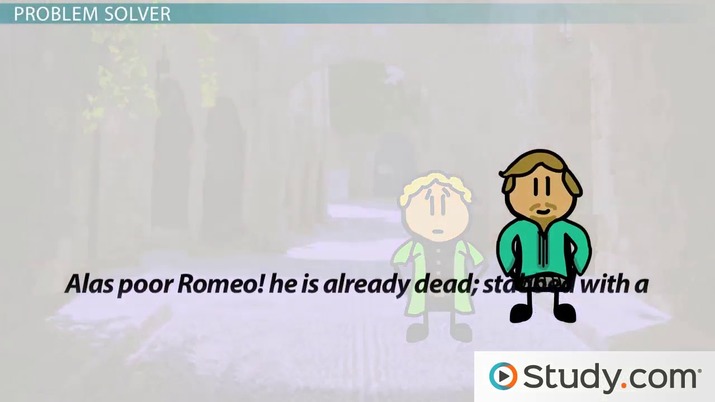 Coming up next: Character of Tybalt: Profile, Traits & Analysis

Along with being a peacemaker, Benvolio is trustworthy. After the fight in the town square, Benvolio gives Lord and Lady Montague an account of all that has transpired. He doesn't slant the story to favor one side or the other but gives a true account.

Benvolio is also a good friend and cousin to Romeo, who has been losing sleep over his infatuation with a young woman named Rosaline. On more than one occasion, Benvolio tries to find Romeo, and he tells Lord and Lady Montague that he tried to follow Romeo that very day, hoping to speak with him. At this point in the play, Benvolio doesn't realize what is troubling Romeo, but he really cares about his cousin and makes an effort to help him. When Romeo reveals what is ailing him, Benvolio replies that he would 'weep' at Romeo's 'heart's oppression' (1.1). Benvolio is compassionate towards others.

As a wise counselor, Benvolio advises Romeo to forget about Rosaline and 'giv{e} liberty unto {his} eyes . . . by {e}xamin{ing} other beauties' (1.1). He goes on to say that if Romeo compares Rosaline to other young women Benvolio knows, they 'will make thee think thy swan a crow' (1.2). Romeo is not too receptive to this idea but does agree to sneak into a Capulet masquerade party, where he meets Juliet and forgets all about his previous infatuation with Rosaline.

Offended that any Montague dare attend a Capulet party, Tybalt sends a letter challenging Romeo to a sword fight. It is Benvolio who brings the letter to Mercutio's attention. Mercutio remarks:

'Alas poor Romeo! he is already dead; stabbed with a
white wench's black eye; shot through the ear with a
love-song; the very pin of his heart cleft with the
blind bow-boy's butt-shaft: and is he a man to
encounter Tybalt?'(2.4).

It is clear to Romeo's friends that he is in no shape - mentally or emotionally - to fight Tybalt, but Benvolio knows Mercutio can handle what Romeo cannot, at least in his present state of mind. Here we see Benvolio, the problem-solver. However, Benvolio is uneasy and would rather avoid conflict with Tybalt if it is at all possible. He advises Mercutio, saying:

'I pray thee, good Mercutio, let's retire:
The day is hot, the Capulets abroad,
And, if we meet, we shall not scape a brawl;
For now, these hot days, is the mad blood stirring' (3.1).

Mercutio, not one to run from danger, and certainly Tybalt's foil, sticks around long enough for Tybalt to find him. They begin to fight, and Benvolio once more steps in as peacemaker, saying:

'We talk here in the public haunt of men:
Either withdraw unto some private place,
And reason coldly of your grievances,
Or else depart; here all eyes gaze on us' (3.1).

Benvolio is also well aware that the Prince of Verona has promised the death penalty to anyone fighting in the streets again. The stakes are too high to risk what inevitably comes - a fight, resulting in both Tybalt slaying Mercutio and Romeo slaying Tybalt. Benvolio, again the voice of reason, advises Romeo:

'Romeo, away, be gone!
The citizens are up, and Tybalt slain.
Stand not amazed: the prince will doom thee death,
If thou art taken: hence, be gone, away!' (3.1)

Finally, both the Prince of Verona and the Montague families rely on Benvolio's trustworthy account as to the deaths of Tybalt and Mercutio, and it is here that we see Benvolio's role in the play subside.

True friends are hard to find, particularly those friends who are willing to be completely honest with us and even protect us from ourselves at times. Benvolio, Romeo's cousin, was such a friend to Romeo and Mercutio. Benvolio is a peacemaker, trusted friend, counselor, problem-solver and voice of reason. Had they listened to his advice, who knows where the plot of the story could have turned? In Romeo and Juliet, Benvolio provides the consistent anchor, holding to his principles when all else breaks loose in the fray, and in the end, he is there to help pick up the pieces.

Benvolio counsels Romeo to forget Rosaline and do what at the Capulet's party?

Metaphor in Romeo and Juliet Act 1

Foil Characters in Romeo and Juliet