Tybalt is the nephew of Lord Capulet and Juliet's older cousin in Shakespeare's play 'Romeo and Juliet'. Learn more about Tybalt's profile, traits, and character analysis, including that of angry foil and fighter, and his pivotal role in advancing the narrative. Updated: 08/28/2021
Create an account

In William Shakespeare's Romeo and Juliet, Tybalt is the nephew of Lord Capulet and Juliet's older cousin. We can accurately describe the skilled swordsman as a tough, cocky and aggressive character who is always looking for a fight. However, we should also be sure to mention that Tybalt is loyal beyond words and honors the family rivalry between the Capulets and the Montagues with great heart. 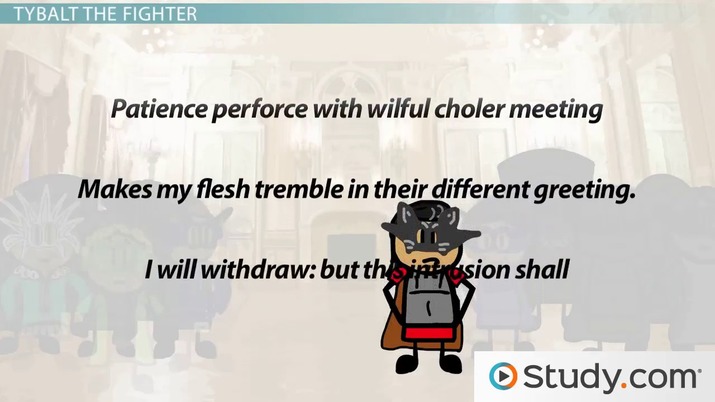 Coming up next: Balcony Scene in Romeo and Juliet: Summary & Analysis

Shakespeare often used foils to show the differences between certain characters in his plays. A foil is basically two characters who juxtapose each other so the audience can see their significant disparities. In Romeo and Juliet, Romeo's cousin Benvolio (whose name even means good will or benevolence) and Tybalt are foils. While Benvolio is just a nice guy who does everything in his power to stop a fight and keep the peace, Tybalt can't draw his sword quickly enough.

The first time we meet Tybalt is in Act 1, Scene 1. Benvolio is trying to stop the servants of the Capulet and Montague houses from fighting. When Tybalt enters the scene, he attempts to fuel the fire and goad the servants. He also tries to pick a fight with Benvolio, 'Turn thee… Look upon thy death.' Benvolio does draw his sword, but attempts to maintain the peace. Tybalt responds, 'Talk of peace? I hate the words as I hate hell, all Montagues and thee.'

The Prince of Verona eventually has to step in and break up the fight. The audience gets the sense here that Tybalt is not only an angry man but perhaps takes the feud between the Montagues and the Capulets more seriously than any other character in the play.

Mercutio, Romeo's best friend, is a similar sort of hotheaded character. However, Mercutio is also known for his sense of humor and great wit, which we really don't see much of from Tybalt. Mercutio hates Tybalt and gives him the 'catty' nickname The Prince of Cats because Tybalt always seems to walking around looking for a fight.

Tybalt, true to his nickname, does find a fight at the Capulet's masked ball. Romeo, Mercutio and Benvolio decide to crash the party in order to try and get Romeo out of the dumps after his love for Rosaline goes unrequited. While the men are walking around the ball in masks, Tybalt recognizes Romeo's voice and of course wants to beat him up for being a party crasher. However, Tybalt's uncle stops him, not wanting to make a scene at the party. This enrages Tybalt to no end, but he listens to his uncle and steps off, for the time being. In his classic snarl, and his typical rhymed couplets, he vows to meet up with Romeo later on:

Makes my flesh tremble in their different greeting.

I will withdraw: but this intrusion shall

One of the most interesting aspects to draw from here is that Tybalt's uncle, an older man with a longer history, is not even upset that young Romeo is at the masked ball. Like it's really no big deal, he says:

And, to say truth, Verona brags of him

To be a virtuous and well governed youth.

I would not for the wealth of all this town

Here in my house do him disparagement.'

Every character in Romeo and Juliet has a specific role in moving the narrative forward. Even though Tybalt is a secondary character with only a few scenes in the entire play, his role may be considered one of the most pivotal.

So, Tybalt goes off to look for Romeo after the masked ball. He doesn't know that Romeo and Juliet have already married in secret, making Romeo his cousin. First he finds Benvolio and Mercutio. Tybalt and Mercutio trade insults until Romeo arrives on the scene. When he does, Tybalt challenges Romeo to a duel. Of course, Romeo can't fight his cousin, so he declines.

Mercutio, an honorable man, doesn't know that Romeo married a Capulet. However, in order to honor the Montague name, he begins to duel with Tybalt. Romeo tries to stop the fight, but Tybalt stabs Mercutio to death. Romeo, heartbroken that his best friend is dead, seeks revenge and kills Tybalt.

After the stabbing, Romeo must flee Verona - and we all know what happens after that. The play ends in the tragic suicidal death of its two young star-crossed lovers, making Romeo and Juliet one of the most heartbreaking tragedies to ever be told.

So, who's to blame? Sure, there's a history of family hostility between the Montagues and the Capulets. Yes, there are other characters that certainly have their part in the tragedy, but it's apparent that Tybalt is directly responsible for the tragedy. Had he not been a hothead and gone to seek out Romeo for crashing the masked ball (which really wasn't that big of deal), then he wouldn't have killed Mercutio, and Romeo would not have killed Tybalt.

If none of that happened, maybe, just maybe, the families could have set aside their differences in the name of love. Of course, Tybalt always did what he thought was right. He thought he was safe-guarding his family, but his rage and anger only wound up hurting the people he was trying to protect.

Tybalt was a hotheaded, loyal swordsman who thought he was protecting the Capulet name. In the end, Tybalt's anger and quick temper resulted not only in his own death, but in the death of Mercutio, which all ultimately led to the suicide of Romeo and Juliet.

Your goal at the end of this video on Shakespeare's character should be to:

Which family does Tybalt side with?

Foil Characters in Romeo and Juliet

Metaphor in Romeo and Juliet Act 1

The Nurse & Comic Relief in Romeo and Juliet