Alisha is a college music educator specializing in historic and world music studies.

Music in the Romantic era used several techniques to evoke an intense emotional response from its audience. Explore the characteristics of Romantic music, and discover how composers used emotion and dynamic contrast to maximum effect. Updated: 10/13/2021
Create an account

Music in the Romantic Era

Music of the 19th century, a period of time also called the Romantic era, was remarkably different from the music that preceded it. The Romantic era was all about making a big splash, overwhelming audiences with intensely emotional music that included extremes of every kind, including contrasting dynamic levels. 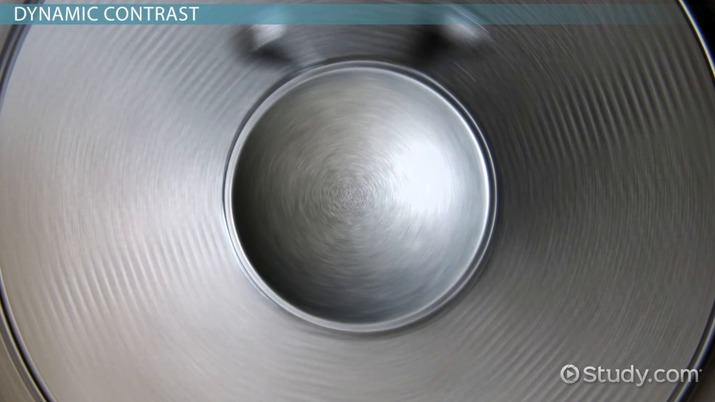 Coming up next: Nationalism in Romantic Music: Heritage & Pride of Romantic Composers

Romantic composers loved a good story. In the past, opera had been the main musical story-telling genre. But in the Romantic era, some composers wanted to communicate with their audiences on a deeper level through instrumental music and began to focus on telling musical stories without a singer or lyrics. To successfully do this, composers needed to create highly emotional music to successfully convey the general moods and plot points of a story without having the benefit of lyrics.

One way that Romantic composers created musical stories was by using flexible forms. Music of the previous century often followed strict musical rules that governed how the music should be structured. Without these restrictions, Romantic composers were able to rapidly transition between starkly contrasting melodies, as Hector Berlioz did in his 'Symphonie Fantastique.' In the fourth movement of this work, Berlioz moves from an ominous death-march to an up-beat tune that portrays the jubilant shouts of an enthusiastic crowd to a poignantly sad melody of a lost loved one. The wide variety of contrasting emotions in a single movement would have been unheard of in a symphony that used the rigid forms of the previous century.

Romantic composers were very focused on melody. Many of these melodies are so catchy that they are still popular today, such as the passionate and tear-jerking 'Love Theme' from Romeo and Juliet by Tchaikovsky, the sneaky and suspenseful 'In The Hall of the Mountain King' by Edvard Grieg, and Rossini's exuberantly jaunty 'William Tell Overture,' to name a few.

Even though they were written over a hundred years ago, the emotions that these melodies portray are still universally recognized by audiences today, which is why Romantic-era music is often used in the background of films, commercials, and television shows.

Romantic composers often pushed musical elements to the extreme to get the emotional impact they wanted, but one element that especially interested them was playing with the musical dynamics, or volume of the music. In music, a loud sound is indicated by the term forte, and a really loud sound is called fortissimo. A soft sound is indicated by the term piano, and a really soft sound is pianissimo.

However, really loud and really soft weren't extreme enough for some dynamic composers. For example, Italian composer Giuseppe Verdi wrote a 'Requiem Mass,' music for a funeral service, that rapidly moves from a whispery triple piano, or pianississimo, to a thunderously pounding quadruple forte, fortissississimo!

Gustav Mahler got the dynamic contrast he wanted for his 'Symphony of a Thousand,' which was originally performed with 1,030 musicians and singers. Mahler designed this massive work to 'make the whole universe ring,' repeatedly asking the performers for even greater dynamic contrast during the intense rehearsals for this monumental piece.

Romantic composers often used sudden dynamic contrast for dramatic effect. There are special music notation symbols that indicate such a rapid change in dynamic levels (see video). The sforzando symbol tells a performer to play with great force. Fortepiano means to play loud then immediately soft. Another popular dynamic directive was subito, which means suddenly. Subito piano, for example, means that performers should get suddenly soft.

The expansion of the standard orchestra during the Romantic era allowed composers to incorporate a variety of new instrumental sounds that allowed for greater emotional range and greater dynamic contrast. Relatively soft instruments like the pedal harp and the celesta, a piano-like instrument with metal chimes instead of strings, contrasted with other new orchestral additions that were relatively loud, like the tuba, a deep and powerful brass instrument, and the piercing little piccolo, a smaller and higher version of the flute.

Two hallmarks of Romantic era music are highly emotional music and dynamic contrast. Composers wanted to emotionally connect with their audiences through instrumental music, and were very focused on creating rich and memorable melodies to help them do this. They were also less interested in following strict musical forms than their predecessors, preferring looser structures that would allow them to contrast a variety of emotions within a single movement. One of the ways that composers made their music more emotional and dramatic was by using dynamic contrast. Composers took dynamic levels to the extreme, writing incredibly loud music, marked fortissississimo, and incredibly soft music, like pianissississimo. They also used surprise tactics for emotional effect, including sudden bursts of sound like the sforzando or instant drops in volume, marked subito piano. The Romantic orchestra also had a wider selection of standard orchestral instruments that were capable of producing varied sounds that increased both dynamic and emotional range.

Connections Between Romantic Music and Art