In her novel ~'Wuthering Heights,~' Emily Bronte paints a picture of characters from two families: the Earnshaws and the Lintons. She uses many different characterization techniques along the way -- let's take a look. Updated: 09/17/2021
Create an account

The main characters of Wuthering Heights are members of two families: the Earnshaw family, who own Wuthering Heights, and the Linton family, who own the much fancier Thrushcross Grange. In the middle of it all is the character of Heathcliff. The two families tangle over the course of the novel, eventually becoming mostly united into one as Heathcliff takes over control of both houses.

The way that each character interacts with the other family and with Heathcliff is a big factor in Wuthering Heights' use of characterization, or the way characters are portrayed in a story and the wider implications that come from that. 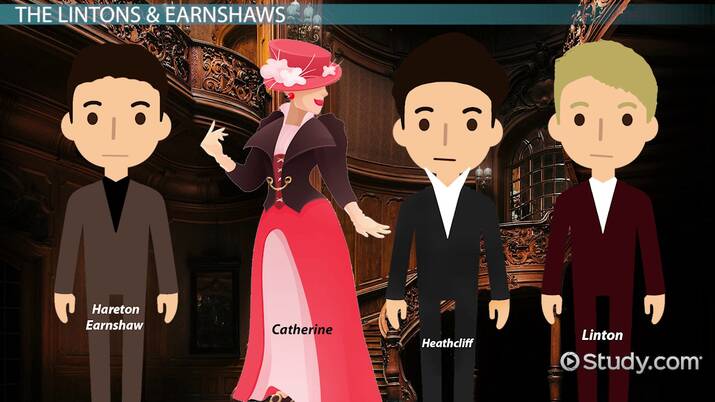 Coming up next: Irony in Wuthering Heights

In general, the Linton family is fancier and wealthier than the Earnshaws. How each character reacts to that class disparity is a big indicator of what kind of character they are. Catherine Earnshaw views the Linton family as a way to get out of Wuthering Heights and increase her own social status; when she's with them, she changes her personality to be much kinder and gentler than when she's at the Heights.

Nelly, the narrator of the book who serves as a maid at both of the houses at some point, isn't as focused on the gap. She's more interested in the juicy gossip that each family provides and in the way they treat her and the other characters she likes. She prefers the Lintons, as they're nicer.

Heathcliff is an outlier, since he's not part of either family, really. He has next to no social standing, so he's not welcome with the Lintons, and other than Catherine and Mr. Earnshaw, he's not really accepted at Wuthering Heights. Heathcliff's difference from everybody is a huge part of his characterization in the book.

Another way Bronte characterizes the people of each house is through their names. Children often have the same names as their parents or other ancestors. Hareton Earnshaw shares a name with the original owner of Wuthering Heights, as we see on the plaque outside its gates, and Cathy Linton shares a name with her mother, Catherine Earnshaw. Cathy parallels Catherine in personality, attitude, and looks.

Bronte also characterizes Heathcliff by having him act in parallel to another character. Hindley Earnshaw, Hareton's father, abused Heathcliff throughout his childhood. So when Hindley dies, Heathcliff abuses Hareton in the same way, berating him verbally and treating him like a servant.

But when it comes to names, Heathcliff, again, is the outlier. He's the only character in the book that lacks a surname; he's just Heathcliff. It's another way that he's out of place among the other characters of Wuthering Heights.

Heathcliff is an example of the Other, which is a concept from literary theory meaning any person or group that's perceived as out of the ordinary. Frankenstein's monster, the aliens in the classic '90s disaster film Independence Day, and the African villagers in Heart of Darkness are all examples of the Other: an external force against which characters define themselves.

As the Other, Heathcliff provides a backdrop for Bronte to characterize just about everybody in Wuthering Heights. Catherine Earnshaw is intrigued by Heathcliff's Otherness, and she becomes fixated on it to the point of destructive obsession. Hindley Earnshaw hates Heathcliff for his Otherness, and he abuses him as a result.

Heathcliff himself embraces his Otherness; he only needs social status and money to fuel his revenge on the Earnshaws and the Lintons, not to better himself. After he gains control of both houses, he's the same, mean old Heathcliff, and he rejects Nelly's attempts to make him a better, more presentable person.

In all stories, there are characters that are static, or those who stay the same over the course of a story, and dynamic, those who are able to change. Bronte uses static and dynamic characters strategically in Wuthering Heights.

Heathcliff is the ultimate static character. Even though he matures and gains money and property, he has the same personality and the same obsessive love for Catherine Earnshaw throughout the novel. This is ultimately his undoing, as his love drives him mad at the end of his life.

Catherine Earnshaw is caught between static and dynamic; she loves Heathcliff with that same unchanging intensity, but she realizes that a love and character that can't change is unhealthy. She marries Edgar Linton because she realizes that she has an opportunity to change with him.

Hareton Earnshaw and Cathy Linton are dynamic characters. They go from hating each other to helpful friendship and ultimately falling in love. The ability to change is a positive force in the novel, and Hareton and Cathy get a happy ending as a result.

All right, let's take a moment or two to review. The characters of Wuthering Heights by Emily Bronte break down into three groups: the Lintons, the Earnshaws, and Heathcliff. Bronte makes good use of characterization, or the way characters are portrayed in a story and the wider implications that come from that in the story. She characterizes these people through their interactions with each other, their parallels with other characters, and their reactions to Heathcliff as the Other, which is a concept from literary theory meaning any person or group that's perceived as out of the ordinary. The static characters, as in characters who are unable to change, don't do well in the book, but the dynamic characters, as in characters who do have the ability to change, get a mostly-happy ending.

Quotes from Wuthering Heights About Setting

Fascination with Death in Wuthering Heights

'I am Heathcliff': Quote Explained