Cynthia has taught high school science courses for many years and has a Master of Science degree and a Master of Arts in Teaching.

A chemical symbol is a simplified written representation of an element using one or two letters for consistency. Discover the origin of these symbols and examples of how they are used by chemists in addition to the periodic table. Updated: 11/02/2021
Create an account

What is a Chemical Symbol?

Think of all the symbols and shorthand ways we represent things in our daily lives. A common example of a symbol that you use every day is an emoticon on your cell phone. You use a smiley face to indicate that you are pleased about something. You don't text 'I'm pleased about that'; instead, you just insert a smiley face. You may also use a shorthand version of your name, a nickname, like Bill instead of using the longer version of your name, William.

Chemical symbols are used in much the same way. A chemical symbol is a shorthand method of representing an element. Instead of writing out the name of an element, we represent an element name with one or two letters. 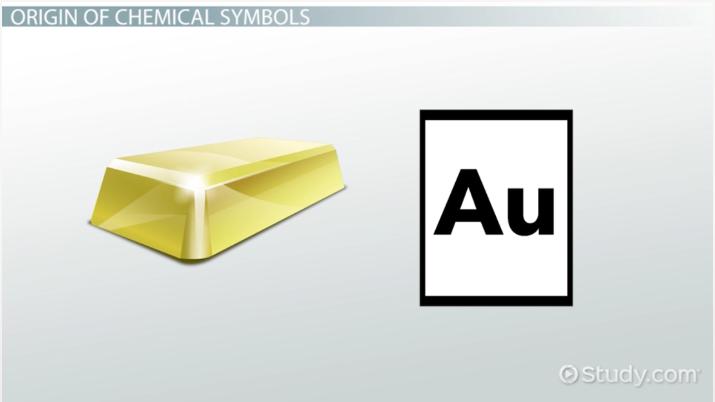 Coming up next: What Is the Difference Between Pure & Applied Chemistry?

So what are the origins of these chemical symbols? As early chemists (known as alchemists back then) discovered the fascinating world of chemistry, they often symbolized their newly discovered elements by weird icons, like the one shown here.

Compare these weird symbols to the ones used for these elements today:

Some chemical symbols don't seem to make sense because the symbol doesn't correspond with the English word for the element. For example, the element gold is not 'G' or 'Go'. The chemical symbol for gold is Au. You are probably wondering why.

It wasn't until the early 1800s that attempts were made to standardize the way elements were represented. A Swedish scientist, Jöns Jakob Berzelius, is credited with coming up with a standard way to represent the elements, although he wasn't the first scientist to use them. He thought it would be so much easier to use letters instead of weird pictures to represent elements.

Use of Chemical Symbols

As you learned, scientists standardized the short-hand way we represent elements, by their chemical symbol. One of the main reasons this was developed was because using letters was the easiest way to represent the elements.

What is a Chemical Formula? - Definition, Types & Examples