View bio
Child abuse is the mistreatment of children and youth, occurring in four types: Physical Abuse, Neglect, Psychological Abuse, and Sexual Abuse. Learn the characteristics and effects of each, and how counseling interventions provide healing. Updated: 12/28/2021
Create an account

'This lesson addresses the topic of child abuse. If you or someone you know is struggling with child abuse, please reach out for help. The following website can provide support: https://childhelphotline.org/'

Did you know that every ten seconds a report is made about a child being abused? Or, that about four children die every year as a result of abuse? It is a very sobering reality that children are being horribly mistreated every day by adults who are meant to love and care for them. Along with physical damage that is being done to children, there are also equally devastating emotional wounds created by harsh words or neglect.

This article talks about four different types of childhood abuse. These are: physical abuse, neglect, psychological abuse, and sexual abuse. 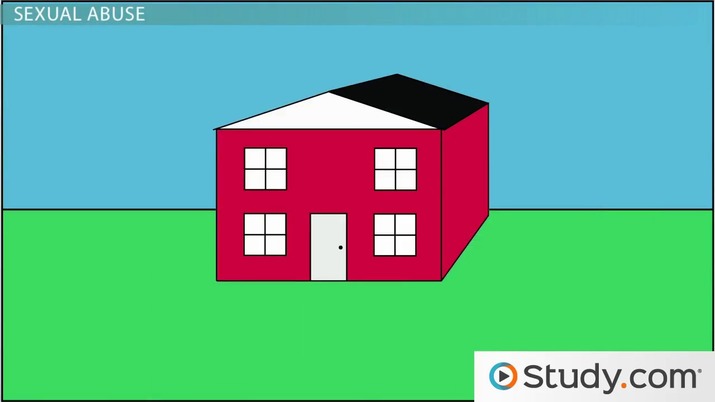 Try it now
Back
Coming up next: The Career Counseling Process

Many of us automatically picture some sort of physical abuse if we hear someone speak of childhood abuse. Physical abuse includes deliberate aggressive actions on the child that inflict pain. Wounds, bruises, burns, and sore muscles are all examples of signs of physical abuse.

Like many boys in abusive homes, Matt lives in fear of his father coming home from work. He forgot to mow the lawn today after school and is worried that his father will become furious again, only to yell and hit him. He wonders if his father has been drinking, which will only make the hitting worse.

Did you know that when parents are continually unavailable for their children it constitutes abuse? Neglect, or the absence of parental care, can have damaging effects on a child's well-being. It is also the most common form of child abuse.

Because Linda's mother is gone again and there is no food in the fridge, she has to figure out how she and her two younger sisters are going to eat today. They often go hungry and feel unsafe as well as unloved. They do not know how long their mother will stay when she comes home, and often, they are left to fend for themselves.

Parents may neglect children because they abuse a substance and are not aware enough to care for others or make plans for them. They may have a mental illness, like severe depression, that keeps them home lying in bed. While they may be present, they are not truly present for their children. Parents who neglect their children may not even have an addiction or illness. They may be consumed with a job, activity, or another person, to the extent that they are rarely available for their children or caring for their needs.

Betsy's mother often makes harsh comments toward her. She tells her she is stupid and that's why her grades are so bad. She tells her she is getting fat and won't be able to find a husband one day. Betsy feels horrible about herself and has little hope for her future. These cruel comments from her mother make up psychological abuse. In fact, all behaviors toward children that cause mental anguish or deficits constitute psychological abuse. It is also termed 'emotional abuse' because damage caused to one's mental state inevitably creates emotional damage.

Besides strong critical statements, psychological abuse can also include: yelling frequently, withholding kindness or affection, prolonged periods of silence, and harsh jokes, to name a few examples. Like any type of abuse, there may be degrees in severity, but the actions still constitute abuse.

When someone touches a child in a sexual way or commits a sexual act with him or her, they have committed sexual abuse. Sexual abuse includes any type of behavior toward a child that is intended for an offender's sexual stimulation. Fondling, forced sexual acts, or indecent physical exposure are some examples. Abuse includes one isolated event as well as incidences that go on for years.

While many people have stereotypes of what a sexual offender may look like, the disturbing fact is that they are often relatives of the child. People that family or friends would never imagine are behaving in such ways are more often than not the culprits.

Every time 8-year-old Gina is about to go to her grandfather's house for the summer, she starts acting nervous and telling her parents she doesn't want to go. They have no idea that she has been touched inappropriately by her grandfather and told not to say anything to anyone. It is important that her parents encourage her to share what is on her mind when they notice her reappearing anxiety.

Diagnoses that are commonly given to children suffering abuse can continue into adulthood without intervention. These include: depression, anxiety, disassociation, PTSD, eating disorders, addiction, suicidal thoughts, personality or attachment disorders.

At the time of abuse and potentially later on, they often have a core sense of low self-esteem. When Matt is in his thirties, he continues to feel the low self-esteem he had as a child. He constantly worries that his wife will leave him for someone better. Survivors of abuse may also retain a fear of trusting people.

Those who went through sexual abuse may also become promiscuous or, on the other hand, frightened by sexual intimacy. Neglected children may have improperly developed psychosocial skills, affecting their information processing, language, and social skills. They may have problems attaching in healthy ways to later relationships because relationships were not modeled for them.

Survivors of childhood abuse may repeat behaviors they saw modeled for them during childhood and abuse their own children one day. On the other side of the coin, they may become hyper-vigilant to the safety of their children and have to monitor them constantly.

The degree to which victims suffer in their later years is determined by the nature, length, and severity of their abuse, whether or not they had support at the time, their unique personalities, and if they received any counseling. Those who do receive counseling even later in life are able to find partial or total healing as well as skills to live free of abuse consequences.

While three of the people we met earlier in the lesson each went through different abuse experiences, the nature of therapy would need to include giving these children a safe place and a voice to speak freely, new perspectives on the events, and growth in their sense of self-worth. If they came to counseling as adults, these same goals would be present.

Families may be present with the child in counseling sessions, say during childhood, adolescence, or young adulthood. If they are, there are certain rules to follow. For example, Gina, who was being abused by her grandfather, should not be present with him in the session. If he is interested in counseling for himself, it should take place on his own. Her parents will also have their own issues to address (like guilt), and they will need to learn how to best support Gina's healing. While the focus would be on Gina's sessions, some family and parental sessions would be vital.

Abuse can create many serious results, such as mood disorders, relationship difficulties, and low self-worth. These can occur during childhood and years later, depending on the severity of the abuse and the person's resources. The good news is that there is real hope for child abuse survivors to find healing. Counseling is focused on providing a safe place for sharing and healthy perspectives of the self and the events. Family and individual sessions are recommended and determined based on individual circumstances.

Neglecting parents often have other problems, such as alcoholism, drug abuse, or mental disorders. It is sometimes the case that they have good intentions toward their children, but they are unable to care for them because their addiction or disorder takes primacy. Imagine that you are a therapist working with neglectful parents who have had their children removed from the home, and who truly want to work on getting them back by improving their parenting. Develop an intervention that you could use with a group of eight mothers who are in this situation.

All types of abuse are disturbing, but sexual abuse especially so. It is common that the abuser tells a sexually abused child that it is her fault, that the abuser loves her, and that it is their little secret that she must never reveal. As a social worker, you are asked to develop an intervention for 4th through 6th graders to help them understand what "bad touch" is and to empower them to speak out if they ever experience this. Keeping their developmental level in mind, develop a program that you could give to children of this age.

The Role of Play in Cognitive Development

What is Cohabitation? | Statistics & Effects

Birth Order & the Inferiority Complex According to Adler

Anger: Overview and Types | What Is Anger in Psychology?