As you might expect, being the world's largest country in terms of population comes with some unique challenges. This lesson shows how China has coped with having more than 1.3 billion citizens.
Create an account

It's really quite difficult to keep things in perspective when talking about a country with a population as big as China's. The world's largest country by population, China has almost 1.4 billion people. The numbers are so considerable that if the entire population of China walked in pairs in front of you, the line would never end because new Chinese citizens would be born in the amount of time it took for them all to pass you.

As you can imagine, a country with a population as big as China's has faced a multitude of unique challenges. Learning about these challenges is definitely worthwhile to other countries, especially those that are starting to find themselves growing at particularly rapid rates. 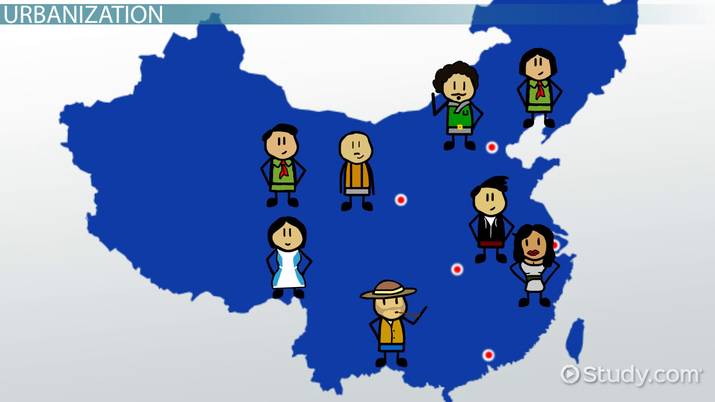 For many young adults, the thought of moving to the big city, whether it's New York, Los Angeles, or just the state capital, has a great deal of thrill. New people, new opportunities, and the potential for newfound riches entice people to move to cities at growing rates in the Western world. The same can also be said about the youth of China, though it is not only young people. Seemingly, everyone in China wants to move to the city. Why is that?

In short, it's many of the same reasons that draw young people around the world to cities, but on a much larger scale. For decades, the Chinese countryside was poor; now, Chinese cities provide a great deal of economic opportunity. Also, while life in many Chinese villages has barely changed, Chinese cities have become quite exciting places.

Such a stretching of resources is something that the Chinese government has been acutely aware of for several years. In 1979, the One-Child Policy was enacted, which served to offer incentives for limiting the total number of children born to just one per couple. By limiting their family to one child, or one set of multiples in the case of twins or triplets, parents could receive discounted health care and child care, as well as preferential treatment for schools. Meanwhile, those that had more children were forced to pay penalties or even face sterilization or abortions.

This policy had a number of unforeseen negative effects, most notably that some families started attempting to have sons instead of daughters. Instances of infanticide, or the killing of newborns based on gender, were not uncommon during this time. Another consequence was known as the Four, Two, One Problem. Chinese society is heavily dependent on younger generations to take care of their elders. However, due to the One-Child Policy, there is only one child to take care of two parents and four grandparents. Even when the policy was relaxed in 2013 and terminated in 2016 to alleviate these issues, many families still chose to only have one child or even no children.

Another real economic impact that is being felt in China, and will only get worse, is the fact that such a large, rich population will put a real strain on China's environment. While China has always supported massive numbers of people, it has done so with a relatively light touch on the land. While terraced farms were built and rice paddies flooded, little long-term ecological damage has been done. However, with the growth of factory farming of beef and pork, all meant to feed the newly rich and their cravings for meat, that will soon change.

Finally, a cause for real concern in many parts of China is the role of its minority ethnic groups. On paper, China has worked to support their rights, exempting them from some of the requirements of the One-Child Policy, for example. However, in reality, China is committed to building a society in which the majority, Han Chinese, are favored.

This is perhaps nowhere better seen than in the two western regions of Xinjiang and Tibet. Until 1949, both were technically independent of China, and both had dramatically different societies. However, in the years since their annexation, Xinjiang has seen steps taken to erase the cultural heritage of its Turkic-majority population. These include greatly increasing the difficulty of learning local languages in schools. The same can be said in Tibet, where periodically the borders are sealed, concealing the place's unique heritage from the rest of the world.

In this lesson, we looked at the changing face of China's population. We saw how urbanization is a major theme, and how the popularity of the One-Child Policy could lead to difficulties for China in the future. Finally, we acknowledged the ecological impact that such rapid growth will mean for China in the coming years and took a look at how the Han ethnic group is often promoted ahead of the other ethnicities in China.

With 1.3 billion people, China has taken measures to address its growing population. Because of urbanization and policies limiting offspring, China has created temporary solutions that may ultimately bring long-term problems. China's huge population and favoring of the Han Chinese majority greatly impacts its environment could potentially erase land and cultures all together.

Ponder the lesson so that you can:

Energy Consumption of The World: The Differences in Consumption Between Developing and Developed Nations

The Distribution of Water on Earth