Chaucer's The Canterbury Tales is not known for its chivalry. However, this lesson will discuss how Chaucer does make a point of showing one glowing example of chivalry through the Knight and his tale. Updated: 01/09/2022
Create an account

Geoffrey Chaucer's The Canterbury Tales concerns 30 people who meet at the Tabard Inn on their way to see the shrine of the martyr St. Thomas Becket in Canterbury. The group is comprised of a variety of pilgrims, from the faithful Parson and the crooked Pardoner to the drunk Miller and the bad Cook. The inn's host, Harry Bailly, helps the journey by suggesting a wager; each person will tell four tales, two on the way to the shrine and two on the way back. Whomever is deemed to be the best storyteller by the end of the journey will have their dinner paid for by the rest of the group. Everyone agrees and the tales are told.

However, the book ends after only 22 full tales and two fragments are told. Since the manuscript for The Canterbury Tales was found posthumously, it is unknown whether the manuscript was ever finished. What is known is that Chaucer apparently wanted to show the corruption of the church. He does this by first describing the background of chivalry for the sake of comparison. 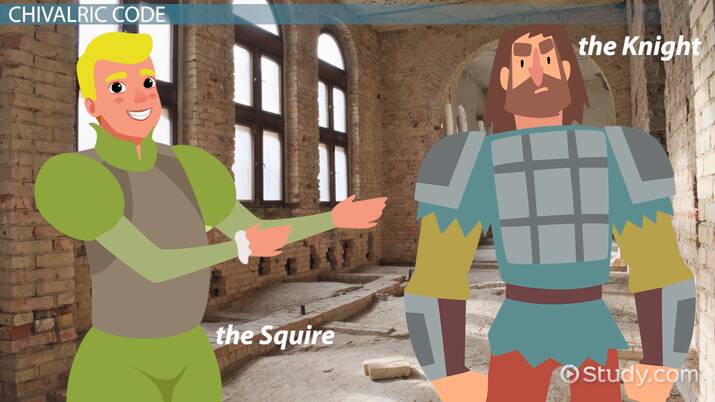 Try it now
Back
Coming up next: The Canterbury Tales: Medieval Society & Culture

The first tale in The Canterbury Tales is the Knight's tale. The first pilgrim described in the general prologue is also the Knight. It's not certain whether Chaucer wrote about the Knight and his son the Squire to intentionally show the dramatic differences between the Knight and the corrupt church. Regardless, it does provide a stark contrast.

The chivalric code of the Middle Ages had many rules that focused on piety and faith. Although knights were defenders and fighters in battles, they fought for God. Another set of rules covered how to take care of and fight for those who could not, like women, children, and the sick. A knight's job was to be a shining example of God and morality, which points to Chaucer's need to discuss and compare religion within his novel.

The Knight & The Squire

The Knight is one of the few characters not ironically discussed or mocked by the narrator or by Harry Bailly. The Knight is described by the inn's host as ''valiant'' and a lover of chivalry. Bailly sees the Knight as an example of chivalry and all of its requirements. The description of the Knight is completely opposite to most of the religious figures on the journey. He fights battle after battle, fighting for his Lord, and chooses humility over vanity. Though the Knight is not a religious figure like the Friar, he is stronger in faith and displays more piety than those employed by the church.

This theme is prevalent in Chaucer's novel; the people who focus on riches and are well-clothed (like the Friar and Monk) are also corrupt. The men who wear functional, non-fancy clothing are the honest ones, including the Knight and the Parson. Chivalry is emphasized when the Knight's deeds are described; the Knight has won so many battles and accomplished so much in his profession that he has the ability to brag, yet he does not. He is also humble and treats all with respect, no matter who they are.

The Knight's son (the Squire) also exemplifies elements of chivalry. The Squire is kind and extremely respectful to his father and others. He's gone to battle with his father and shown talent in war, jousting, and courtly love, all of which are chivalric ideals.

The Knight's tale is imbued with more chivalry than any story within The Canterbury Tales. His story tells of two knights who are the epitome of chivalry and fight side by side. However, everything changes when a woman comes between them. Both knights fall in love with the same woman, thus starting down a dark path of going against their personal codes in hopes of following courtly love.

Yet, chivalry is brought back into the story when the Duke intervenes in the conflict, creating clarity where previously there was only anger. The Duke respects both knights and creates a resolution that follows the knight's code by having them joust for their love. This jousting ends with one knight hurt, and another dying; however, both find their brotherhood again and one manages to get the girl.

The Canterbury Tales does not have many tales or people that are chivalric. However, the Knight is the symbol of the chivalric code, a set of rules about fighting for God and for those who cannot fight for themselves, showing the stark contrast between his piety and faith and a lack of these qualities among many of the other pilgrims. The Knight has fought for God and maintained his humility. The Knight's tale continues this chivalry by portraying the brotherhood of knights and how this code is worth dying for.

The Knight in The Canterbury Tales: Description & Social Class

The Canterbury Tales: Gender Roles & The Role of Women

The Franklin in The Canterbury Tales by Geoffrey Chaucer | Summary & Analysis

The Squire's Tale in The Canterbury Tales: Theme & Analysis

Irony in The Canterbury Tales by Geoffrey Chaucer | Uses & Examples

The Knight in The Canterbury Tales: Description & Social Class

The Canterbury Tales: Gender Roles & The Role of Women

The Franklin in The Canterbury Tales by Geoffrey Chaucer | Summary & Analysis

The Squire's Tale in The Canterbury Tales: Theme & Analysis

Irony in The Canterbury Tales by Geoffrey Chaucer | Uses & Examples