Learn about chord families in music and discover what defines chords as tonic, subdominant, and dominant. Explore the function of chords, the relationship between scales and chords, and the key features of each chord family. Updated: 12/28/2021
Create an account

The Function of a Chord

Imagine that you're playing chess. You've got a whole bunch of pieces at your disposal, but in order to win, you need to use them correctly. That means that you have to understand the true function of each piece. If you're using your knights to draw out your opponent's pawns but saving your own pawns to attack the queen, well, let's just say that would be an unusual strategy.

We can think about musical composition in the same way. You've got all of these notes and chords at your disposal. Technically, you can arrange them however you want, but unless you understand the function of each chord, your composition may not turn out how you'd hoped. Every chord does something different, and once you get this down you'll be able to create music that will put everyone in check. 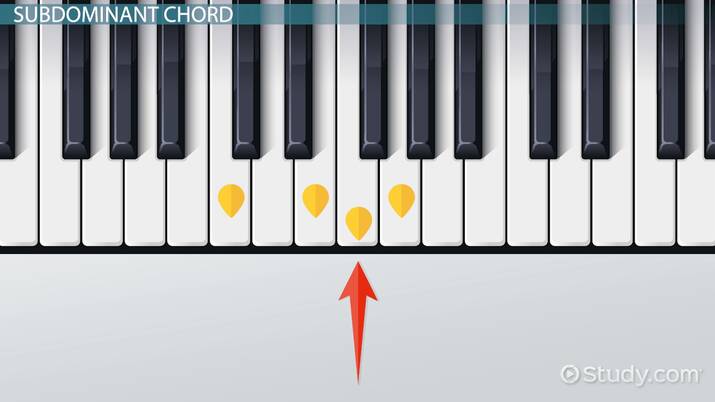 Try it now
Back
Coming up next: Cadence in Music: Definition & Types

When we're looking at chord function, we're talking about chord families, or groups of chords that play the same role in their respective keys. That means that we have to start by refreshing our knowledge on the relationship between keys and notes.

Let's begin with the basics. If a piece of music is written in the key of C, that means it's based on the C major scale (an easy one for us to use, since it has no sharps or flats). The C major scale includes the notes C, D, E, F, G, A, and B (and then it starts over again with C).

However, each of those notes also represents a chord that we can build with. So, rather than understanding the key of C as just a series of notes, it's better for us to understand it as the chords C major, D minor, E minor, F major, G major, A minor, and B diminished.

So how do we go about building tension? One of the best ways to do this is to move from the tonic chord to the subdominant chord, which is the fourth chord in the key. In the key of C major, the subdominant chord would be F major. The triad of F major includes the notes F, A, and C, so it shares at least one note with the C major triad of CEG. At the same time, the root of the F major chord (F) is right between the other two notes of the C major chord, E and G.

The result is a subtle buildup of tension. It's not a lot, not yet, but it's enough to let the listener know that we're moving away from the tonal center.

So how does it do this? Look at the notes in each triad. The C triad contains the notes CEG, while the G triad is made of GBD. Again, one note is shared (the G), but now we have a B in the mix. This is a big deal. In the C scale, B is the seventh note, that which is most disharmonious with the root. So, the coupling of the G and B creates stress and tension, but in a way that still connects to the tonic chord and begs for harmonious resolution (as opposed to the B diminished chord, which is just grating). This is the function of the dominant chord, to set up the music in a way that will have the most satisfying resolution, the kind that leaves everyone feeling tingly and warm inside.

Minor Scale Patterns, Chords & Intervals | What is a Minor Scale?

What is a Major Seventh Chord? | Types of 7th Chords

How to Determine Minor Key Signatures in Music

Intervals in Music: Overview & Use | What Is an Interval in Music?