Anne has a bachelor's in K-12 art education and a master's in visual art and design. She currently works at a living history museum in Colorado.

Every December, the world turns festive and bright. People put up Christmas trees and decorate them with ornaments that have special meaning. In this lesson, we'll take a look at the meanings and history of Christmas ornaments. Updated: 01/08/2021
Create an account

Although today's Christmas ornaments seem somewhat commercial, the tradition of decorating a Christmas tree is said to go back to 16th-century Germany. Germans decorated evergreen trees with apples, which were referred to as paradise trees. Paradise trees represented the tree of forbidden fruit in the Bible. Later trees were decorated with wafers, candles, and pastries in the shapes of angels, flowers, hearts, and stars.

These traditions spread throughout Europe and Germany. It's been said that Martin Luther, a 16th-century German religious reformer, was the first person to put candles on a Christmas tree. He was inspired to do it after seeing stars twinkling through evergreen trees. Later decorations included paper streamers and berries. 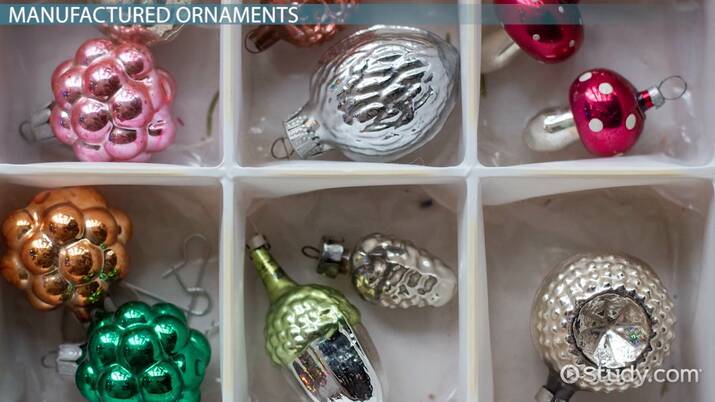 Coming up next: Christmas in Latin America Lesson Plan

Glass was included in other decorations as well, like beads. People also started using paper, painted nutshells, and tinsel. Early tinsel was created using real silver, and first appeared in the 1600s.

Christmas ornaments stayed in Europe until the 1770s, until they came over to America with Hessian soldiers during the American Revolutionary War. Americans thought the tradition was a bit odd, however. Christmas was a sacred holiday, and Christmas trees were thought of as a pagan symbol and rather frivolous. This mindset continued until about the 19th century.

The 1800s finally saw an acceptance of Christmas ornaments in America due to German and English immigration. These immigrants brought their traditions with them, and people decided that maybe decorating a Christmas tree wasn't such a bad idea after all.

The popularity of Christmas trees and ornaments skyrocketed during the reign of Queen Victoria. Despite the English distrust of Germany, Victoria celebrating her German husband's (and hers as well, as her mother was German) traditions helped increase the popularity of the festivities. Decorated Christmas trees became quite a fashionable thing to have in England and America.

Store owners also began to see the business potential in Christmas ornaments. F.W. Woolworth, who started Woolworth stores, visited Germany in the 1880s and decided to import glass ornaments to sell in his stores. Selling them was a good decision, as he did quite well.

Most of these glass ornaments were made in Germany until after World War II. Other ornaments were made of fiberboard, which is a thick type of cardboard, and depicted angels and other scenes. Hallmark Keepsake ornaments began in 1973, marking a yearly tradition for many families.

Whether made of glass, paper, or plastic, ornaments all have special meanings. Many families choose angel ornaments, which some say represent the angels at Christ's birth. Stars represent the star of Bethlehem. Santa Claus finds a place, too. A pickle ornament is believed to bring luck. Some do meaningful ornaments, like ''baby's first Christmas'' and things like that. Some decorate their trees with a theme, like using old blue and silver ornaments, while others decorate with whatever ornaments they want.

Okay, let's take a moment to review what we've learned. Christmas ornaments have had a long history. The tradition of decorating an evergreen tree during the holidays goes all the way back to 16th-century Germany. Trees were decorated with apples and referred to as paradise trees. These trees represented the forbidden fruit from Genesis in the Bible.

Ornaments were later made of glass and sometimes apple-shaped or round. Christmas ornaments continued to be a mostly German tradition until about the 1800s. They had been introduced by Hessian soldiers during the Revolutionary War, but Americans thought the traditions were odd, pagan, and frivolous.

Continued immigration in the 1800s brought new traditions to America, including Christmas ornaments. Queen Victoria celebrated her and her husband's German heritage by having Christmas trees, so that made trees and ornaments a popular thing to have. F.W. Woolworth brought ornaments to the public by selling them in his store. Hallmark started selling their keepsake ornaments in 1973. Today people decorate their trees with everything from angels to Elvis, depending on what's meaningful to them.

Facts About Caterpillars: Lesson for Kids

What is Poetry? - Lesson for Kids