Meredith has studied literature and literary analysis, holding a master's degree in liberal arts with a focus on depictions of femininity vs masculinity in literature and art.

Christopher Marlowe's 'Edward II' is a history play based on Britain's King Edward II. Learn the history of Edward II and then explore a summary of the play and its main concepts. Updated: 09/15/2021
Create an account

Edward II is considered one of the earliest history plays. A history play is a play based on a historical event or on historical people. It condenses the entire problematic reign of Edward II into a single narrative and focuses primarily on his relationship with Piers Gaveston—a confidant and favorite of Edward II considered by many academics, such as Frederick Boas, to have been the king's lover—and how the relationship affected the politics of the era. 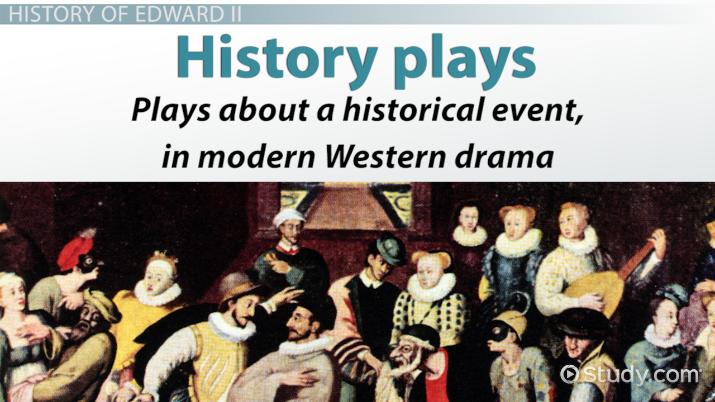 The play opens with Gaveston, who had been exiled by Edward II's father, Edward I, reading a letter from Edward II. Edward I had exiled Gaveston because Edward II had become extremely close to Gaveston, to the point where the prince ignored his duties and angered the nobles by lavishing Gaveston with gifts and attention. Edward I has died, the letter says, and Gaveston's exile is no more. Gaveston rejoices, soliloquizing about the Bacchanalian celebration he will bring to Edward II upon his return.

Immediately upon their reunion, Edward begins giving Gaveston titles, the keys to the royal treasury, and tells all who will listen that Gaveston (despite his very not-noble birth) is better than the common person and deserves all of this attention. The nobles (particularly Lancaster, Warwick, and Roger Mortimer, who confusingly shares the same name with his nephew and shall hereafter be referred to as Mortimer Senior), as well as Queen Isabella of France, Edward II's much-ignored wife, are furious. They call for Gaveston to be exiled again.

The nobles corner Edward and Gaveston and present Edward with a written demand for the exile. They rail against his neglect of the kingdom, his poorly performing military (especially against Robert the Bruce in Scotland), and how he keeps the coffers nearly empty in order to shower Gaveston with gifts and titles. Edward is forced to agree to the exile and, after a highly emotional farewell with Gaveston (during which Isabella accuses Gaveston of alienating her husband's affections, and Gaveston calls her out for her affair with Mortimer Senior), Edward and Gaveston depart so that Gaveston can begin his exile in Ireland.

Soon afterward, Isabella has an apparent change of heart and suggests to the nobles they ask for Gaveston's exile to be lifted once more. They protest, but she insists. She pulls Mortimer Senior aside to tell him it would be easier to ensure Gaveston would no longer be a problem if they kept him in court. There he could be killed and removed from the king's life entirely. She hopes Edward will pay her attention once more (which must have surely been awkward for her paramour to consider).

Edward rejoices at this change of heart and doesn't really stop to question why the nobles, who had pushed so hard for the exile, are suddenly suggesting Gaveston's return. He plans all manner of tournaments and fetes to celebrate, even arranging for Gaveston's marriage to the king's cousin Margaret. The nobles waste no time in killing Gaveston after his return, devastating Edward. Edward has Warwick and Lancaster, the two nobles who he felt persecuted Gaveston the most, to be executed, and he seeks comfort in the counsel of Spencer, a court favorite who had served Gaveston. Isabella is enraged by the king's lack of attention and takes her son, Edward III, to France where her brother is king and seeks aid against Edward there.

England is at war on at least two fronts, namely Scotland and Normandy, and the nobles have turned on Edward. Edward declares war against the nobles even while trying to fight against Robert the Bruce and the King of France. Isabella is refused aid by her brother but returns to England and joins with the nobles in plotting to overthrow Edward and put Edward III on the throne, which Edward III protests. He begs his mother to reconsider and refuses to help in their plans, but he is ignored.

Edward, after being run to ground by the nobles, is taken prisoner and after a sham trial, is murdered by Mortimer, who calls him a threat to the throne. Edward III is horrified and furious. He is put on the throne and immediately has Mortimer executed, despite Isabella's begging. He has his mother imprisoned for her treason. The play ends with this first kingly act by Edward III, thus avenging his father's murder.

Marlowe wrote a condensed and raw history play about Edward II's reign. Marlowe focused on homoromantic relationships in several of his plays, most with a historical or mythological basis for the relationships. Edward II's relationship with Gaveston is largely considered to have been a romantic one, and Marlowe's depiction of Edward's near-obsession with Gaveston reflects that probability. Rather than use the historical events of Edward's reign and murder as a frame upon which to hang a narrative, Marlowe wrote a rather unflinching narrative that could be considered a criticism of the current nobility's tradition of betrayal and neglect.

Edward II by Christopher Marlowe is considered one of the earliest histories plays. A history play is a play based on a historical event or on historical people. It condenses the entire reign of Edward II into a single narrative-driven primarily by his relationship with Piers Gaveston, Edward's confidant, court favorite, and likely his lover. The play first deals with Gaveston's return after Edward I's death, thus lifting his exile. Then it primarily deals with the treason visited upon the king by his nobles and wife (by bringing him back to court after a second exile, which made his murder easier) due to the king's fascination with and love of Gaveston. Ultimately, due to treason, Edward III is placed upon the throne but has the conspirators executed. In the case of his mother and former queen, Isabella, he has her thrown in prison.

The Gunpowder Treason: England After Elizabeth I

The Duchess of Malfi by John Webster: Summary, Analysis & Themes