Holden is in his 80s, and he's happy for every day he has in his life. But everything's not all rosy. He has coronary heart disease, which means that his blood vessels are narrow. He also has arthritis, a disease that causes painful inflammation of his joints.

Holden is in late adulthood, or the time of life after age 65. For many people, this is a fun time, because they often have more free time to spend with their loved ones, and they also often are less stressed out than when they were younger.

But it can be a difficult time, as well, particularly when it comes to illness. As people age, they are more susceptible to illnesses of all types. Let's look closer at how age affects illness, and at the two types of illness: chronic and acute. 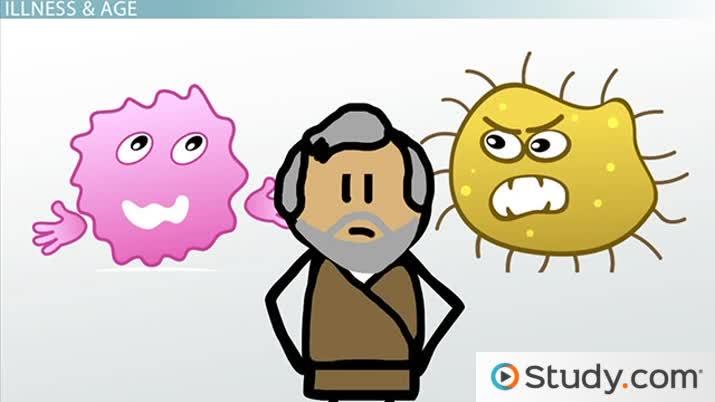 Coming up next: Health & Illness of the Aging Population: Definition & Trends

Remember Holden? He has coronary heart disease and arthritis. To make things worse, Holden had a heart attack last week and is now in the hospital. Things just aren't going well for Holden.

Disease is often classified into two categories: chronic and acute. Chronic illness is a disease that lasts a long time. Chronic illnesses are usually treated, not cured. For example, Holden takes medication for his coronary heart disease and for his arthritis. The medication helps his symptoms, but it doesn't cure the underlying diseases. Instead, those are always with him.

On the other hand, an acute illness is a disease that lasts a shorter time. Treatment for acute illnesses can involve curing the disease. For example, when Holden has a cold or the flu, the disease runs its course and then is gone. It doesn't stick around for years, like his heart disease or arthritis.

Remember that Holden is in the hospital because he had a heart attack. While this is likely related to his chronic heart disease, the heart attack itself is an acute illness because it happened and then was over. In contrast, his heart disease is still there.

If I told you that Holden has arthritis and coronary heart disease and that he had a heart attack recently, but you didn't know his age, you might still guess that he was in late adulthood. That's because, while chronic and acute illnesses can occur at any age, illness is more associated with late adulthood.

There are a couple of reasons why this might be true. First of all, chronic illness is more common in late adulthood than earlier in adulthood; that is, older adults are more likely to suffer from chronic illnesses than younger adults are. This is true of Holden: when he was younger, he didn't have problems with arthritis, and his heart was fine in his 20s.

Chronic illnesses aren't the only ones that are different in late adulthood. Acute illness can be more serious for older adults than for younger ones. For example, when Holden was younger, getting the flu meant a couple of days in bed. But now, the flu could land him in the hospital. Because his body is not as able to fight off illness as easily, acute illnesses could leave him worse off than if he was younger.

Once you finish this video, you should have a better understanding of how to: