Lesson Transcript
Instructor: Sarah Phenix
Chyme is a semi-fluid material consisting of partially digested food and digestive secretions that are expelled by the stomach. Learn about the definition and function of chyme, and explore the role of the stomach in mechanical and chemical digestion. Updated: 11/30/2021
Create an account

If you've ever gotten sick and thrown up, then you are intimately familiar with what chyme is and the varied ways it can appear. Chyme (pronounced KIME) is that thick, highly acidic, semifluid material formed by the digestive juices of your stomach interacting with the food you've consumed. It's the product of two forms of digestion - mechanical digestion and chemical digestion - and you can't get the nutrients you need without it. 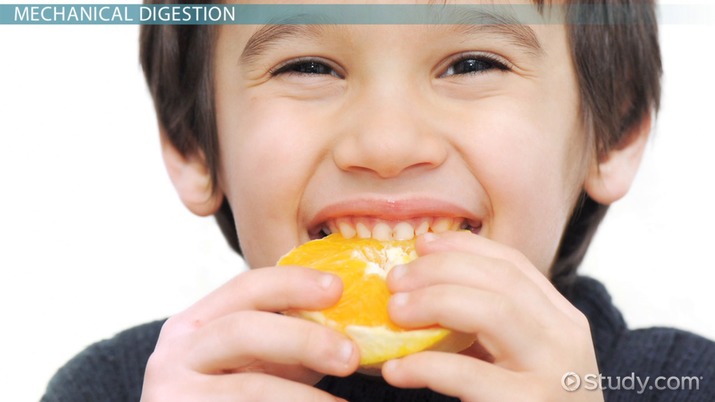 Did you know that from the very second you take a bite of food, your digestive process has begun? Your teeth are responsible for mechanical digestion, or physically breaking up food. Their purpose is to take that original food item, like an apple, and break it into smaller pieces. This speeds up digestion and make the entire process easier for your body.

Why are smaller pieces easier to digest? Well, imagine the difference between trying to dissolve an entire piece of rock candy in a glass of water versus granulated sugar. Now, they're both made out of the same thing, but it would take the rock candy a lot longer to dissolve. That's because the granulated sugar crystals have a higher surface area, meaning that more of each crystal is able to interact with the water surrounding it than the larger piece of rock candy.

As you chew and mechanically break down that bite of food into smaller pieces, you're also mixing in your saliva. This is chemical digestion, the breaking down of food using enzymes or acids. Your saliva actually has digestive enzymes in it that specifically break down things like carbohydrates and fats. What about proteins, you ask? Well, that's actually one job of the stomach, and we'll get to that in just a moment. So, once you've chewed your food enough, you swallow it down your esophagus and send it on it's way to chyme production in your stomach.

Your stomach is a kidney bean-shaped organ that sits right below your liver. Now, digestion is the sole purpose of this organ and it takes its job very seriously, employing both mechanical and chemical digestion. The walls of your stomach actually have three layers of muscle tissue so that, when they contract they form a rhythmic, wave-like action down the length of your stomach, called peristalsis. This peristaltic action mechanically churns the contents of your stomach, mixing the food you just swallowed with the digestive juices secreted by the lining of your stomach.

Why does your stomach churn your food? Well, think back to the sugar in water example. Now, if you just pour the granulated sugar into the glass and leave it, it will certainly dissolve on its own, but if you take a spoon and stir the mixture, then you speed up the process along, right? Well, your stomach uses that same technique. By churning the food, your stomach increases the speed at which that food turns into chyme by increasing the interaction between those particles of food and the digestive juices in your stomach.

When we talk about digestive juices (or stomach juices) we're talking about the stomach secretions that chemically break down your food. To do this your stomach uses a combination of hydrochloric acid (HCL) as well as an enzyme called pepsin. Pepsin is an enzyme that breaks down the protein content of the food you eat while the HCL brings the environmental pH of your stomach to between 1.5 - 2. That's about a million times more acidic than water (pH 7). In fact, your stomach is so acidic that you have special cells, which only produce large amounts of mucous, without which your stomach would literally eat itself!

Where Does It Go From Here?

Once your stomach has worked its mechanical and chemical magic turning that last meal of yours into chyme, the chyme is sent into your small intestines. Upon entry, the chyme mixes with sodium bicarbonate (produced by your pancreas) to neutralize the HCL. Once that is complete your intestines can start absorbing all of those molecules of nutrients, electrolytes, and water that are now available to the bloodstream.

Once past the intestines, the remaining chyme enters the colon where starches, fibers, and proteins are further broken down by bacteria. By now all the nutrients have been absorbed and the chyme is stored away as fecal matter to be excreted out of the body later.

Chyme is the highly acidic semifluid material that results from your digestive juices chemically breaking down food. Chyme is the product of two forms of digestion, mechanical digestion and chemical digestion, and is a prerequisite for the process of nutrient absorption. Chyme production begins in the mouth - chewing breaks food down while salivary enzymes chemically degrade carbohydrates and fat. Food molecules are further reduced by the hydrochloric acid and pepsin enzyme of the stomach as well as the peristaltic action, mechanically churning food with the digestive juices secreted by the lining of your stomach.

What is Bile? | Function & Production

Catabolism: Examples & Reaction | What is Catabolism?

Microvilli Function & Location in Cell | What is Microvilli?

Transverse Colon Overview & Function | What does Your Colon Do?