Chymotrypsin is an enzyme used for digesting proteins. In this lesson we will learn what types of proteins it digests and how it digests those proteins. Updated: 09/14/2021
Create an account

Imagine you just had a nice juicy steak, cooked to perfection and perfectly seasoned. There was probably quite the party going on in your mouth, but what happens to that meat after it leaves the mouth? There are several steps throughout the digestive tract to break down the protein in that steak into pieces that can be absorbed into the body. One of these steps is chymotrypsin. Chymotrypsin is an enzyme found in the duodenum that selectively cleaves off pieces of amino acids from the protein chain.

Specifically chymotrypsin cleaves phenylalanine, tyrosine, and tryptophan bonds, or in other words, the aromatic amino acids. It cleaves these amino acids starting from the C-terminus of the protein. 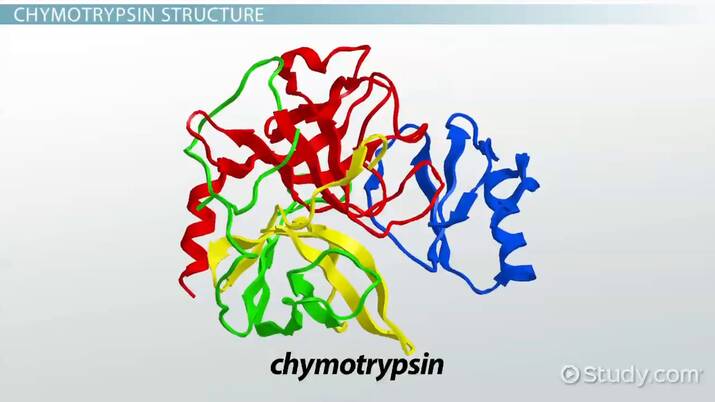 Coming up next: Chymotrypsin: Uses & Functions

Once an aromatic amino acid finds its way into the chymotrypsin hydrophobic pocket then the reaction which cleaves the peptide bond can occur.

First, the oxygen on the aspartic acid draws electrons away from the histidine by sharing the hydrogen with the nitrogen. This causes the other nitrogen in the ring to take the hydrogen away from the OH on serine. The negative charge on this oxygen can then attack the peptide bond, with the extra electrons going onto the oxygen:

When the electrons from the oxygen's negative charge reform the carbon-oxygen double bond the carbon-nitrogen bond of the peptide is broken. The nitrogen takes the hydrogen from the nitrogen on histidine. This releases this portion of the protein. It has now broken off from the rest of the protein:

At this point the peptide bond has been broken, but the reaction still isn't complete because the second half of the protein (the half with the aromatic amino acid) is still attached to the enzyme. So in order to release the second half, water is added. The nitrogen from the histidine takes the hydrogen from water and the OH attaches to the carboxyl carbon, putting a negative charge on the oxygen again:

All right, let's take a moment or two to review this lesson's important information. As we learned, chymotrypsin is an enzyme found in the duodenum that selectively cleaves off pieces of amino acids from the protein chain. We also learned that it selectively cleaves aromatic amino acids, as in phenylalanine, tyrosine, and tryptophan bonds, off of the C-terminus of proteins. The hydrophobic pocket in chymotrypsin allows the selection of aromatic amino acids. The amino residues aspartic acid, histidine, and serine actively play a part in the reaction.

There are four steps for the peptide bond to be broken:

Uses of Bioinformatics in Genome Analysis

Inhibitors of DNA/RNA Synthesis: How Rifamycins and Quinolones Kill Bacteria