Betty has a master's degree in mathematics and 10 years experience teaching college mathematics.

What Are Circular Functions?

You may have initially learned about the sine, cosine and tangent of an angle as the ratio of the sides of a right triangle. The sides that form the right angle are called legs, and the third side is called the hypotenuse. Given angle A, the three ratios are as follows:

The circular functions may be thought of as a way to extend these extremely useful mathematical relationships to any triangle. To visualize circular functions, we first start with a unit circle, or a circle with a radius equal to one unit of measurement.

In this circle, draw an x-y coordinate plane, with the origin at the center of the circle. 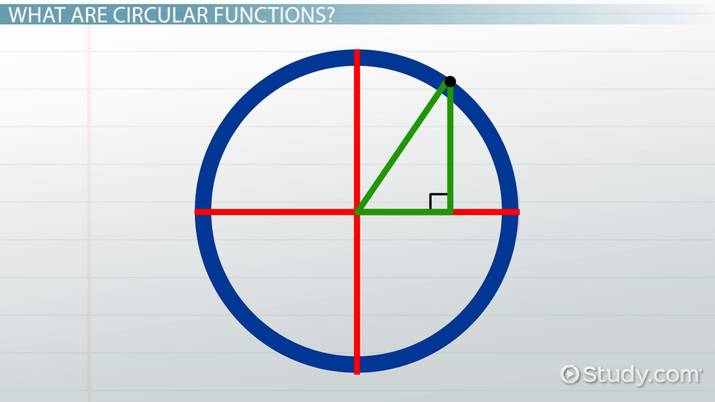 Coming up next: Finding the Area of a Sector: Formula & Practice Problems

Using Trigonometry to Describe Points on a Circle

How does this x and y value translate into trigonometry? Since the hypotenuse is always equal to the radius of the circle, we call it r. Since the horizontal leg lies along the x-axis, we call it x. Since the vertical leg describes a position on the y-axis, we call it y. Using x, y, and r, we can now describe sinA, cosA as follows:

Now, as the hypotenuse moves counterclockwise around the circumference of the circle, a right angle can be formed this same way for every angle from 0 degrees to 360 degrees. Each of these angles can be described by the point (x,y) or (rcosA, rsinA).

Keep in mind that for most angles, you will have to use a calculator or table to find the value for the cosine or the sine to complete your calculations. Here is an example of using these formulas: If we want to convert a 90 degree angle in a circle of radius 1 into an (x,y) coordinate, the steps would be as follows:

What about circles with radii not equal to 1? The radius of 1 makes the calculation and understanding simpler. However, the radius of the circle can have any value except zero for these formulas to work.

In a circular function, we found that x = r * cosA , y = r * sinA, and the hypotenuse is the radius of the circle or r. Since x and y represent the legs of the right triangle, we can derive a very useful equation using the trigonometric functions sine and cosine.

If we divide each term by r^2, we obtain the following:

This is called a fundamental trigonometric identity because this equation will be true for every angle value.

Circular functions allow the basic functions learned in right angle trigonometry to be extended to angles of any size, using a unit circle. By doing this, every angle from 0 degrees to 360 degrees is paired with a unique ordered pair (x,y) in the coordinate plane. Also, a very important identity is established that connects the basic Pythagorean Theorem to the sine and cosine.

How to Identify a Conic Section by Its Formulas

What is a Parabola?